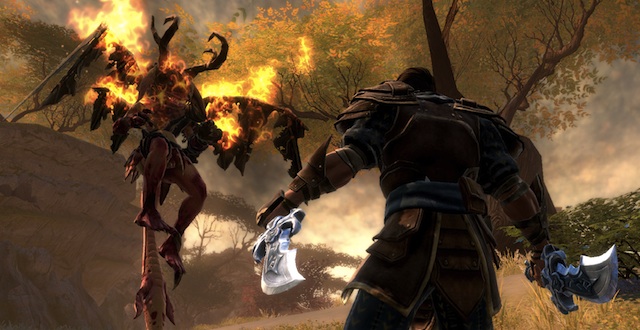 It’s sometimes said a writer spends her life writing and rewriting the same story in slightly varied forms. The same could be said of players who spend their whole lives playing and replaying the same videogame. Kingdoms of Amalur: Reckoning is a model example, requiring selective amnesia to appreciate as anything more than a hollow repetition of old ideas in a slightly new configuration. It’s a simulacrum of other games’ parts, whose borrowed limbs are stitched to the carcass of a Crayola-colored fantasy world.

The grand innovation in Reckoning purports to be its combat system, which borrows the carnivorous slapstick of Devil May Cry and God of War, wherein particular combinations of button presses can be strung together in cartoonishly exaggerated attacks, punctuated with a moment of slow-motion spatter. Traditionally, medieval role-playing games like Reckoning have had to dilute these kinetic pleasures into a weak tea of dull, mechanistic axe swings, largely a consequence of wanting to create large worlds where simply wandering alone in the wilds was its own satisfaction.

Reckoning presumes that combat has always been the weakest part of role-playing games and addresses the issue by, perplexingly, adding even more combat to the experience. There is something ridiculous about pretending you have a role in a fairytale civil war, the conflicts of which are regularly reduced to missions where 10 trolls must be killed in a particular cave. Reckoning has been designed as if this ridiculousness was not a result of mathematical kill quests existing alongside conversational melodramas—in which players listen to villagers recount local histories while periodically getting to ask a follow-up question—but instead a result of the kill quests’ lack of combo strings, animation timing, and slow-mo spatter effects. Instead of embracing the challenge of building on the strongest parts of a role-playing experience—its lore and the allure of seeing a story revealed in fragments from all its participants—Reckoning mires itself in the most retrograde and awkward parts, giving its cartoonish combat an elaborate spit-shine to distract from the ludicrous contrast between mechanistic killing and the prolonged attempt to sympathize with fictional characters who can talk back to you.

If he is trapped in an existential loop telling the same story again and again, it is one about the comfort of being able to live in a world of magical widgets that can be made to do anything and signify anything.

In some ways, this approach makes Reckoning even worse than the older games it hopes to improve upon. One of the crucial elements of The Elder Scrolls V: Skyrim, a signal example for story-based role-playing, is the knowledge that any other character you encounter in the world can be attacked. And in the instances when you’re sent into a dungeon to fight a particular group or species of enemies, it’s safe to predict that very soon after players will discover a village where the supposed enemies live, hear their sympathetic side of the story, and, if one so chooses, abandon an old affiliation for a new one. The point of combat in a game so made is not to make the player feel hyperbolically powerful, but to make them feel like they should be thinking carefully about who it is they’ve chosen to attack. Reckoning‘s ardor for action and guttural empowerment squelches any such subtlety for the sake of immediate gratification of one’s adrenal gland.

The story that surrounds this adrenal milking comes from R.A. Salvatore, a novelist savant who’s written more books in his career than many Americans will have read in their entire lifetimes. Salvatore does not simply write novels, he writes whole sequences of novels enumerating the history and social nuance of invented races and species—as seen in The Dark Elf Trilogy, The DemonWars Saga, and Chronicles of Ynis Aielle. If he is trapped in an existential loop telling the same story again and again, it is one about the comfort of being able to live in a world of magical widgets that can be made to do anything and signify anything. His prose is larded with proper nouns whose nonsensical qualities can only be broken by completely immersing one’s self in nonsense. “Three Warsworn Keeps guard the summer Faelands…,” one mission-giving character explains mid-game, “To each a Castellan, and in Klurikon, Amaldor Syerri Kura oversees our part in the war.”

For Reckoning, Salvatore has imagined a character killed during a war, and brought back to life by a mysterious power that may well indicate some Messianic future. Fate in this game is imagined as a fabric of many threads, and the hero (I named mine “MoMo” after an old nickname I once had) has the remarkable ability to unwind all of these threads and remake Fate according to her choosing. This is a theatrical way of setting up a game system whereby players can choose to distribute a limited number of points to boost character attributes. With these numbers you can weave your own destiny by adding 3 points to Longsword Mastery, say, while adding an extra level to your Blacksmithing skill. A few hours later you can unweave it all and reinvest your points in Staff-based magic and Sagecraft instead.

Being resigned to the fact that repetition and reassembly is the best one can ever come up with obviates the very spirit of creativity.

The idea is interesting, especially in the context of role-play, but it extends only to customizing combat and the handful of elements that support it. It allows you to change your tactical approach to the game’s kill quests—a fix, basically, prepared in anticipation of a player getting bored with swordplay after a few hours—but you will not see other threads of fate unwound anywhere other than in the game’s menu. You won’t be able to undo the consequences of a poorly considered alliance or to marvel at how much the world can be changed after a few small choices—ignoring that healer who asked you to help her quell a disease outbreak, for instance, might have led to an outbreak across the whole land. It’s an old workaround masquerading as a new idea.

So too the game’s aesthetic sensibility, guided by Spawn artist Todd McFarlane, which favors neons and pastels over realism and thawing splendor. Amalur is a colorful place with cartoonishly exaggerated characters that are obscured, and not distinguished, by the art style. The sprawling design of the game necessitates hundreds of different kinds of characters, whom it strives to make unique through subtle details more suited to realism. In cartoon whimsy, the subtle differences between 30 different Templar Knights or elves are hard to pluck out. And, in contrast to other games in the genre, the world is not quite an open-ended oyster but instead a series of globular zones connected by narrow, winding passages. Though large, every area feels artificially constrained, surrounded by invisible walls meant to funnel you into the appropriate passing tubes. It seems more like a series of holodecks with digital trees and rivers strewn across them than a world with an epochal history written in its landscape.

If repetition is a fate of all people who create, it is admittedly churlish to turn up one’s nose at the absence of newness in any given work. On the other hand, being resigned to the fact that repetition and reassembly is the best one can ever come up with obviates the very spirit of creativity. Reckoning is a perfectly functional and consumable distillation of old ideas, which, when reappropriated, lose any degree of meaning that might have been contained in their original, less perfected forms. It’s an excruciatingly dull game, a garish succumbing to the inescapable limits of its creators’ imaginations. It is a lavish catastrophe in which all the props have been borrowed from the past, and not a single thing worth doing can be done with them.