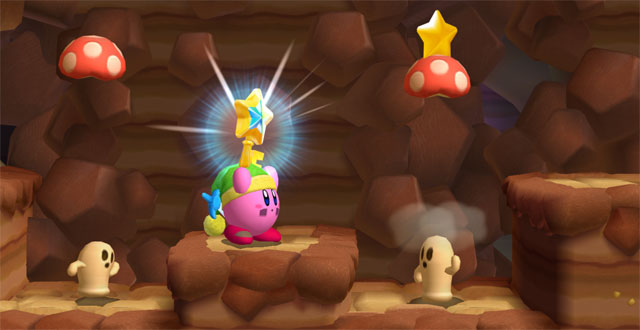 Piano trills tickle me forward until I fall, landing in a smushed cloud of DayGlo frosting. The soft impact hurts little. Winged orbs, ostensibly foes to be vanquished, flit around me with the aim and tenacity of drunk gnats. The largest threat to my well-being is a tree, its face of round holes cut into its bark depicting perpetual surprise. Overhanging branches drop apples on my head, and I eat them. Here in “Cookie Country,” nothing can stop me. Because nobody is trying.

And that’s okay with me. When I’m slogging through another game world or our own, my heart rate rises from agonizing and consistent miscalculation. Fingers bleed. Getting through the day is tough, waking life’s spurious claims of Have a Nice One notwithstanding. Here, in Dream Land, I eat a hot dog or a stack of pancakes and all wounds are healed. Standard-definition scenes unfold with the hazy filter of a felt storybook.

But that’s the thing about dreaming. It’s so easy. All you need to do is lie down and close your eyes.

These are dark days, my friends.

I speak not of a debt-filled future, nor the trumpet-blowing prognosticators of end times. Right now, a million LCD screens are using one-third their capacity. When I recently upgraded to an HDTV alongside a new HD-ready console, one thing struck me as odd. Before most games began, a menu led me through a contrast stabilizing exercise to make the screen the appropriate darkness. I’d lower the game’s brightness levels until three objects (often skulls, or a warning scratched into a wall by something with razored fingers) were visible, barely visible, and not visible at all. This is partly a consequence of modern televisions and a large amount of them relying on backlighting, causing an unfortunate brightening of the screen. The other reason for this Goldilocksian hoop is the high percentage of recent games taking place in a dark, dark world.

Not only are the color levels stretched toward blackness. The chosen topic of pretend veers into murky territory more often than not. This is the era of Gears and Warfare and Asylums. In the span of a quarter-century, digital playtime has deviated from whimsical pursuits of barrel hopping and dot munching to less innocent arts. We march ever onward toward the kill zone, racking up higher and higher body counts. Players’s appetites for these grim worlds are never sated; the kind of interactive murder perpetuated in week after week of blockbuster releases makes the mid-’90s “shockers” of Time Killers and Night Trap look quaint.

Enter Kirby. If there is one anathema to the culture of testosterone-fueled slaughter spattered across the screens of adolescents (and adults) everywhere, this is it: an easy game featuring a pink, waddling blob. Games are supposed to destroy us, some say. We should rise from the ruined shells of our former, crippled selves and defeat a system so valiantly coded as to wreck us. After paying 60 dollars for the privilege.

Getting to the end is no arduous task.

Traditional Kirby games refute this alleged rule. Getting to the end is no arduous task. The basic mechanics of moving through the world make this plain from the start. Your pink blob has the ability to inhale and absorb the powers of those around you. That sword-wielding nymph up ahead? Swallow him up and now your pudgy fingerless palm somehow grips a blade. Much of the game’s frictionless joy is seeing your next mutant form: from tree leaves to ninja stars to boxing gloves to stone hands to boomerangs to ice shards to thrown spears, your pink poof rarely casts aside his detractors with the same weapon twice. Observant players will enjoy the reference or two: that green cap worn while in Sword form looks awfully familiar. But not all weapons are useful. Fidgety completionists itching to swallow up everything in sight are punished for their haste: digesting a sleeping enemy causes you to lie down and snooze, whether you want to or not.

Power alone needn’t hinder designers from cleverly situating even more powerful obstacles in your way. But the team at HAL Laboratory has little interest in slowing your progress. Since the first Kirby game—1992’s Kirby’s Dream Land for the Game Boy, designed by Masahiro Sakurai—the experience was meant for beginning players. Instead of jumping over bottomless pits with perfect timing, all Kirby needs is to swallow a gulp of air—he expands and floats, allowing you to flutter about with little concern for dangers below. Nearly 20 years later, those same first-timers, if they’re still playing, are likely above such training wheels. But Kirby’s Return to Dream Land revels in its own accessibility. Nintendo has always catered to the widest spectrum of potential fans. It might be onto something: According to a recent study by market research firm NPD Group, the fastest growing segment of gamers are those aged two to five years old.

If you’ve played Kirby’s Adventure for NES or Kirby 64: The Crystal Shards for Nintendo 64, you’ve played something like Return to Dream Land. This generation’s version brings subtle change. One addition is the rare superpower, allowing you to brandish a screen-filling version of a previous weapon. Find the Ultra Sword and take out huge chunks of rock, altering the landscape of the stage. Smash the right section and you’ll uncover and get sucked into a hidden vortex, where menacing dark matter fills the screen, chasing after you. These sections engender the feeling closest to “panic” the game can muster. After beating the main quest, I replayed a level to find a hidden token, collected to unlock bonus mini-games. I waddled too slowly, was caught by the oncoming blue-back swirl. But the shimmering mass merely pushed me ahead. Only if caught between the dark matter and a wall will Kirby be crushed and finally succumb to the sad, albeit bouncy, death sound effect. Even the void wants you to persist.

Again, that’s the point: to dull what many find to be games’ over-complicated, overly punishing systems to a soft, cushy nub. The success of the Wii and its motion control was a clarion call to all those confounded by mastering 12 buttons, or wielding dual-analog sticks. It’s an old dirge by now, replaced by newer arrangements. But the white baton still has a song or two left. Here, the Remote in your hand allows for a tactile, if shallow, engagement; shake the controller to open that gelatinous mouth even wider and inhale normally un-swallowable items. Hold off on gulping them down and take a moment to enjoy—Smile! Laugh!—the sight. Your plump pink ball is now more rotund, bulbous even, his nondescript legs barely visible beneath the bulk of expanded mass. Swipe that sleep-crust from your tear duct: you are no sculpted marine. You resemble less a muscled titan than a smiling glob of mucus.

If you haven’t played these games, or many others, you may well be smitten. Multiple people can join in and play at the same time. After the first three stages of the first world, my girlfriend submits her alternate review of Kirby’s Return to Dream Land: “A-ha! You hug each other to regain health? This is so fun. It’s my new favorite game.”

I just inhaled what looks like a flying eyeball and spat out a glowing star.

These are dark days, my friends. Oh, wait—I’m dreaming. My eyes must be closed.