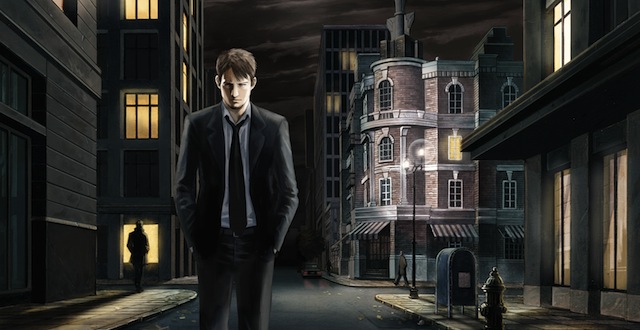 Playing Last Window: The Secret of Cape West makes me angry. Not because of the game: it is a game that tries, really genuinely tries. I’m angry that Cing, its developer, is gone. It’s an impotent rage, where I mutter under my breath and whenever somebody writes another op-ed about The Sorry State of Modern Gaming, I almost bite my tongue clean through and think, “Jesus, where the hell are you looking?”

I want to say, “Have you played Hotel Dusk? For the DS?”

And in my head this strawman says, “No, what is it?”

And I tell them you play a washed-up salesman, who’s actually a detective for a company that specializes in finding things. You’re in a motel in the middle of nowhere and you have to unravel this noir mystery and the puzzles are really interesting and neat and the characters are so well drawn, and the art style is like that A-Ha video for “Take on Me” and you should really try it.

“So it’s an adventure game for the DS?”

But it’s so much more! It’s easy to see why Cing closed down, why they weren’t able to move more copies of their games: their games parallel existing genres, but to smooth off Hotel Dusk: Room 215 and call it an adventure game takes away a lot of what’s special about it. It’s what an adventure game should be, not what the genre currently wallows in.

In the sequel Last Window, you play Kyle Hyde a year after the events of Hotel Dusk. It’s 1980 and Kyle is being evicted from his dingy bachelor apartment because the building’s been bought. He’s close to getting fired, too, and he’s gotten a mysterious order to find the “Scarlet Star.” Again, reducing the game to its plot does it a disservice.

Evidence Last Window is actually trying, Part 1: Unlike 99 percent of all adventure games you can’t just randomly pick stuff up and carry it with you. This form of kleptomania is so ingrained in the genre that at first I found this really annoying. “I know I’m going to need that hammer at some point!” When Kyle, later, mentions that he needs the hammer, I was angry because a) I told you so, and b) he had solved the “puzzle.” Then I thought: Would that have really been much of a puzzle? I started to realize that for years designers had been putting really obvious puzzles in these types of games to make me feel like I was doing something, when really I was stating the obvious, much like Hyde had done. That means that either developers of those games thought they would be challenging for me—they thought I was an idiot—or they thought they were legitimately difficult to figure out, which doesn’t bode well for their intelligence. What Cing does here is say, “Look, you’re not an idiot. We both know you need the hammer. Let’s be upfront about this.” A frighteningly sensible argument that doesn’t insult my intelligence. As to the previous crime of not carrying the hammer in the first place, that’s a case of keeping in character. I have never, in my day-to-day life, carried a hammer around with me unless it was part of my job. Hyde has no reason to just carry one around, so he doesn’t. That’s just the type of guy he is.

Evidence Last Window is actually trying, Part 2: Most of the puzzles, in the traditional adventure-game sense, rely on the unique capabilities of the Nintendo DS. What should I expect from a game that makes me hold it on its side like a book, making me consciously aware of the hardware I’m using? For example, one puzzle has you inserting a doorknob back into the door. The knob is on the touchscreen, the door on the other. Once you line them up, there’s that second where you think, “Now what?” Then the “Oh!” moment: I close the DS and open it again. The knob is reattached. These are lateral-thinking problems not bound by the strict in-game logic. You actually have to think of the game as something you’re playing on a DS, and consider the physical properties of the device itself.

Evidence Last Window is actually trying, Part 3: The real puzzles, however, unfold in conversation. Throughout the game you talk to other characters. A lot. At certain points in Hotel Dusk, when you were given a choice as to what to say, one option usually led down a dead end. The actual puzzle came in putting the case together. I, as the player, did not get the case spelled out for me. I was given the facts and had to read between the lines and make the connections myself.

This was fine, but Last Window adds the ability to ignore a line of questioning too. Conversations seem more fluid, more organic. You have to know these other characters. You have to know their relationships with Hyde, their subtle cues. I know that Dylan is a huge gossip and that conversations with him are a delicate tit-for-tat that can backfire. I know Tony is good-hearted, but really unreliable. Betty is bubbly, but lonely. I like Mrs. Patrice, but she is no-nonsense. I know that sometimes I have to ease up on questioning, lest she shut me down completely. This comes across in conversation and in the various things you do for these people.

I have never, in my day-to-day life, carried a hammer around with me unless it was part of my job.

This alone isn’t worth mentioning. If the game were only concerned with characters as ciphers, then it would simply be making its puzzles human-shaped. But the game spends half of the time developing these relationships just for the sake of developing them. Mid-game there’s a whole sequence where a friend comes to visit, and it’s only there as an emotional payoff for a relationship established in the first game.

There’s an infamous Hollywood legend that the screenwriters adapting Raymond Chandler’s The Big Sleep couldn’t figure out who murdered a particular character; and when they phoned up Chandler, he admitted that he didn’t know either. It’s still a classic. Last Window‘s mystery is the least interesting part. It’s an engine that drives the game; but when Hyde mentions his dead father early on, you know that will also be central to the mystery. Noir has never really been about the plots, but the feeling and the mood. What we take away are the characters, and how they inhabit the world and move through it.