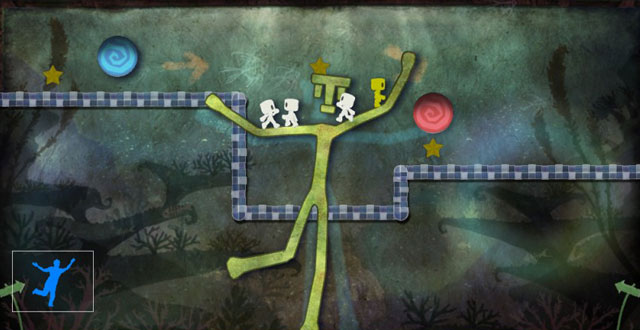 When I was a little boy, I was so frustrated at my parents for some perceived slight that I freaked out, ran screaming to my room, laid on my bed, and hoisted the soles of my feet to the wall. My typical spoiled, only-child temper tantrum involved kicking the wall repeatedly with my feet, an impotent but excessive display of rage and perceived injustice. In this instance, though, the drywall gave way under my feet, and I found myself thrusting my foot straight into the horizontal crater.

I stopped throwing a fit. I searched frantically for my Ren & Stimpy poster, pinned it up over the hole and, as far as I knew, my parents were left in the dark. I was sure they would discover what I’d done and that wrath would follow swift and fierce. But that punishment never came; we moved into another house, and the damage I’d done was never brought up.

In Leedmees, your role is that of a gentle giant. The Kinect superimposes your figure onto the screen, reanimating your posing and reaching with a twitchy but workable consistency. You act as bridge and transport for a group of Lemming-esque beings called Leedmees. These unthinking inhabitants walk blindly onto your arms as you balance them, helping them to avoid spikes, pits and other obstacles.

Two or three low-class Leedmees fall to their doom, are stepped on, or walk aimlessly so that one VIP can reach his goal.

Eventually, though, you get carried away: you grow impatient or anxious, eager to sweep these unknowing creatures through as quickly and efficiently into their goal. As you reach down to grab one Leedmee, you squash another. The first time this happens, it’s startling in its apparent irrelevance: he pops like a bubble, disappearing in a few fantastical sparks; the other Leedmees continue as if nothing ever happened. Most crucially, one dead Leedmee does little to alter your final evaluation in the game. Normally, in order to pass a level, you only need half of the Leedmees to make it to the goal, and achieving a high letter grade is more about acquiring stars than it is saving lives.

So Leedmees, in its training you to be a gentle and helpful giant for these beings, also trains you to make decisions about their worth in the heat of the moment. When one Leedmee walks through a star, he turns gold. If he makes it to the exit, he is worth quite a bit. And so, two or three low-class Leedmees fall to their doom, are stepped on, or walk aimlessly so that one VIP can reach his goal.

The first time you kill a Leedmee, it’s a mistake that comes from not knowing your own strength. As you lumber around the screen, merely touching the small creatures pops them like bubbles. Your impulse is to cover up the transgression with a quick restart. But you continue with your silly play, with your reaching and swaying and bending, and find it tainted with a sense of your own imposition and uncontrollable strength. Are you helping the helpless? Sure—but only at the expense of the even more unfortunate ones, who are stuck walking back and forth, waiting for your help until you find you have thrust your foot right through them in an attempt to save their friend.