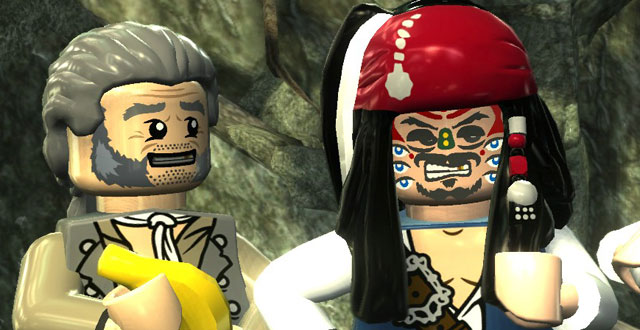 Title:
Lego Pirates of the Caribbean

A few years back I had the arguable misfortune to see Sahara in the theater. I spent the first hour or so in the state of minor distress probably experienced by most cinemaphiles when exposed to Matthew McConaughey, whose career can be distilled roughly in the phrase “charming abdominals.” But about halfway through the film, I realized this: any review of Sahara must include the word “romp.” Viewed through that lens, the film became much, much more enjoyable.

If you are looking for high art, Lego Pirates of the Caribbean: The Video Game is not the game for you. Not by a long shot. You should not come to Lego Pirates looking for challenging puzzles, a rich game world, or expert storytelling, although you might find those things anyway.

Ultimately, there is only one reason to play a Lego videogame: fun. Fun has been the stock-in-trade of the Lego games from the beginning, but in Lego Pirates, Traveller’s Tales has reached the apex of its goofy art.

In a way, the Pirates franchise is really a homecoming for the Lego games, both in fact and in spirit. Lego was making pirate Minifigures for more than a decade before it started making Star Wars figures, so Lego Pirates is really the first videogame to come from Lego’s pre-videogame past. The “of the Caribbean” part is new, to be sure, but piracy and Legos go back more than two decades.

Jack Sparrow was riding a pig, and I, as Will Turner, was running about slapping everyone I could find with a large fish.

More importantly, though, the Lego videogames have always been fundamentally piratical in spirit. The core gameplay mechanic of every Lego game has always centered on a few key elements:

This may as well be the job description for a pirate. It’s only when you’re actually playing as a pirate that you realize how odd it’s been in the previous games. Since when has plundering thousands of the local currency been the defining characteristic for a “True Jedi?” Or a “True Wizard?” Could destruction of property and acquisition of money be a less desirable characteristic in a “Super Hero?” But a “True Pirate?” Absolutely. More than any other environs that have been rendered blockily by Traveller’s Tales, the Pirates universe aligns with the Lego universe in a way that is simply perfect.

By the second level of Lego Pirates, I was running around Tortuga with a swashbuckling woman, a midget with a blunderbuss, and a drunken blacksmith. Jack Sparrow was riding a pig, and I, as Will Turner, was running about slapping everyone I could find with a large fish. I do not think there is an upper limit to how much I could do this.

The puzzle elements of the game, too, benefit from this wild enthusiasm. Instead of the previously common “lug a box to a platform” puzzles, we get Davy Jones running in place on a barrel to open a door. Or Jack following his magic compass to a critically important fried egg. We get zip-lines. We get swords. Cannons. Fireworks. Fun. Never has random smashing felt more natural than in Tortuga.

The less-appealing corollary of this, though, is the fact that many of the Lego series’ limitations are magnified here, as well. Because Lego Minifigs can’t speak, the storytelling in Lego games has always been a little like charades. But given the wacky complexities of the Pirates mythos, and the goofiness of its character, the storytelling in Lego Pirates ends up something like Harpo Marx pantomiming the Iliad. The game is full of cut scenes, which are almost entirely incomprehensible, even if you already are well acquainted with the Pirates movies (which, I must admit, I am).

Lego Pirates, in short, is excellent at being exactly what it is. If you expect you would enjoy a game wherein the main protagonist is a small yellow statue acting out Johnny Depp’s impersonation of Keith Richards, then you will find Lego Pirates to be everything you could ask for, and well past worth your time. If you would not, then quite frankly you have no business playing a Lego game anyway.