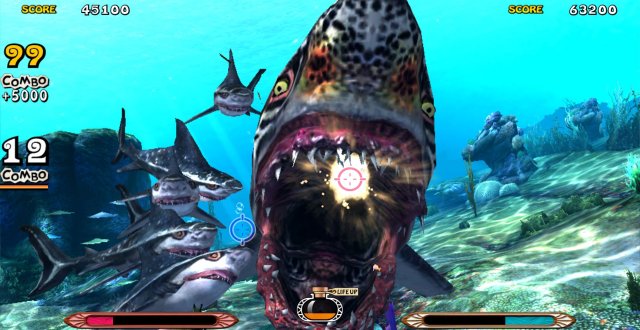 Fittingly, Let’s Go Island stood alone. Sandwiched between multiple kiosks of Terminator Salvation and The House of the Dead 4, its two-seated, boat-shaped arcade cabinet pointed at a screen filled with the wonderfully saturated blue skies and green trees that Sega is known for. In this setting the colors were so compelling they practically reeled me in on their own. I stepped in with my date, started the motor, and sailed away.

Very quickly you realize it’s not just the colors that are saturated, as the characters’ vacation goes wrong almost instantly. For seemingly no reason at all, swarms of great white sharks suddenly chase down your boat, leaping into the air as they try to land a bite of your Hawaiian shirt. Of course, as they leap you fill their mouths with infinite amounts of ammunition. Simply pivot your light-gun turrets and shoot with abandon. Reloading is unnecessary; in fact, it’s against the very nature of this experience. The boat-shaped cabinet swerves back and forth, jerking up and down, all the while the stereotypical tourist couple intermittently screams phrases like “Shiver me timbers!” in hilariously over-acted voices and accents.

“Why?” any of this is happening is never a question that Let’s Go Island entertains. It’s too busy throwing the next curveball at you and your partner. Fend off giant, mutant insects by hitting them with golf balls and soda bottles. Point your turrets in the correct direction to avoid crashing your boat into a giant octopus. Time your button presses correctly to avoid taking damage as you fall off a cliff. The entire adventure is drenched in this kind of ridiculousness, and the game’s complete indifference toward explaining any of it manages to work in its favor.

The question, then, isn’t really about what this kind of game can teach us about love, but about what it can do for the two people it attracts.

Of course, by the end of the first level you know why: love. Let’s Go Island keeps track of how often you and your partner lock on to the same targets and stay in sync with each other as you shoot your way through this disaster of a vacation. It uses this information to rate your compatibility and love, then proceeds to offer simple yet nevertheless unsolicited relationship advice for low scorers. Since nothing here is ever taken seriously, though, this rating exists mostly to be laughed at after completing a stage. The question, then, isn’t really about what this kind of game can teach us about love, but about what it can do for the two people it attracts.

The arcade scene in Japan has been undergoing a transformation these past few years. I can’t speak for American arcades, but here in South Korea, too, the focus is shifting from hardcore attractions like Tekken to more casual fare where novelty is king. More titles are being geared toward couples who’ll play once or twice for 10 to 15 minutes, rather than those who’d return over and over again to hone their skills. The more outlandish something is, the more appealing it’ll be to those out together. Let’s Go Island, whose popularity has spread overseas and which will see the inclusion of a glasses-free 3D display this summer, follows in this tradition.

This is probably why, even as your love for your partner is called into question, it never stings to receive an abysmal compatibility score. It doesn’t compel you two to get better next time, or explore the intricacies of the adventure. While Let’s Go Island is made for and enhanced with two people, it’s never quite a collection of thoughts between those people. Ultimately, this is because the game doesn’t really ask you to think. For a simple night out, that’s perfectly good. It asks you to sit back, take in the colors, shout, smile, look at your partner, and laugh while the cabinet sways on the ocean and tropical setting ahead of you. All that arcade noise slips away for a brief moment in time.

By the end of Let’s Go Island’s final level, after all our teamwork and everything we managed to overcome, my girlfriend and I were awarded a compatibility score of 36 percent. It couldn’t have been more wrong. And it couldn’t have mattered less.