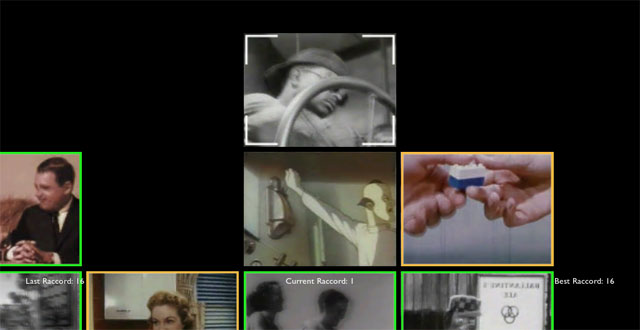 At first glance, Loop Raccord could be a John Cage composition in videogame form. The game stitches together footage from the public domain, such as cigarette commercials and black-and-white cartoons, to make disorienting sounds. One clip shows a redhead from a ’50s-era television show enthusiastically answering the phone. “Hello, Yes!” she repeats, like a broken record. Beside her, in a different clip, a gray-bearded man is slamming the tailgate of his truck. The game turns ordinary noise into its soundtrack. In this way, it shares an affinity with Cage, whose composition Water Walk calls for the performer to crush ice cubes in an electric mixer, blow on a goose whistle, and squeeze a yellow rubber duck.
If Loop Raccord doesn’t sound like a conventional game, that’s because it isn’t. Creator Nicolai Troshinsky disavows that he is a game developer. Although Loop Raccord is subtitled as “a video-editing game,” the emphasis is clearly on the editing. The idea is to arrange looping video into a chain reaction, so that one triggers the next. As a game, it’s tedious and somewhat frustrating. But as a montage of ice-skating penguins, randomly generated noise, and game elements like a scoring system and multiplayer, it’s irresistibly modern.

It is also challenging, but not in the same sense as playing Gears of War on the highest difficulty. The experience is abrasive and chaotic, like listening to noise music. As squares of video are dealt onto the screen, their sound effects loop, slowly constructing a wall of noise. A blow of the 5 o’clock whistle is layered on top of muffled voices, cartoon sound effects, and a distant percussion that almost sounds like a free-jazz drummer. Though not in the same league as noise produced by bands like Black Dice and Boredoms, the results are similar.

Comparisons to musical acts ultimately fall short, however, because Loop Raccord isn’t trying to make music. Nor is it trying to be video art. It isn’t even trying to be a game. It exists as an intersection between the three. I found the most compelling moments in Infinite Loop mode, where your ability to concentrate is pitted against your tolerance for singing ballerinas and the clang of boots stomping on metal stairs. As a kaleidoscope of arbitrary sounds and moving images, Loop Raccord is inevitably amoral. But it does acknowledge the burden of living in a world where we are constantly tuned in. The game whirls into a confusing mass.

While a piece of experimental music such as Water Walk treats everyday objects as instruments in an orchestra, Loop Raccord’s recordings and sound bites are fiendish devices that drive us toward madness. At first, the rhythms are offbeat and interesting, but soon expose their jagged edge. The videos appear to sync up, but lack any reason to do so, other than the underlying system. It’s as if YouTube is taunting you. A sequence of momentary distractions swells into a hair-pulling crescendo. Around the 15-minute mark, I needed fresh air. I walked outside and listened to cars swoosh by, and air-conditioners humming in the distance, and my cell phone dinged.