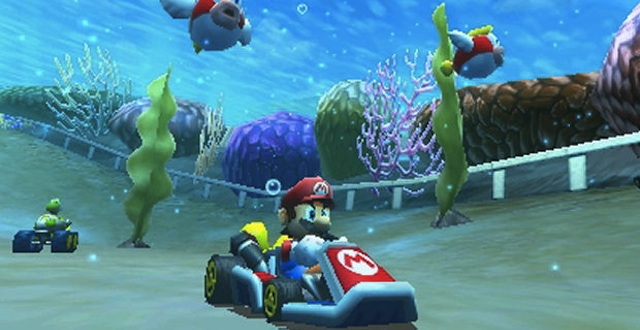 Nintendo’s hugely popular mascot racing series has a following that approaches some small religions. And like the hesitant zealot, Mario Kart is often tweaked but rarely transformed. To go unchanged can also mean to go unspoiled; Mario Kart 7 was the Nintendo 3DS’s highest-selling game over the pivotal holiday period, and with good reason. The game’s a crackerjack, a soothing reminder of all that fans have loved before.

But it does buck one trend, and that is in its name. Previous entries suffixed the corresponding game system and that was that. Creative or artistic specificity were not priorities. Thus we played Mario Kart 64, Mario Kart DS, Mario Kart Wii. To start numbering a series only after six unnumbered attempts smacks of a subtle voodoo: What are they doing over there?

The seventh book of the Bible is Judges. In layman’s terms, the book describes those men acting as prophets to the people of Israel, who allegedly spoke to their God and made decisions for the public based on proclamations from on high. I can think of no greater analogy for how the computer plays at the highest difficulty levels of Mario Kart 7.

Not all comparisons are useful: surely no one wants a product aligned with the seventh planet, sadly relegated to playground jabs and immature chortling.

Nor should the prospect of sinfulness appeal to the wily marketer of family-friendly goods (though Kart’s phenomenal sales numbers surely point the way to Greed, if not Envy).

The most likely scenario is the numeral “7” having a lucky connotation, especially in Nintendo’s home country of Japan, where the Shichi Fukujin, or the Seven Gods of Luck, come bearing such Nintendo franchise iconography as a lucky mallet, a sword, or Kart‘s very own lucky feather (from the original Super Nintendo game).

And so we will move on to speak about the game proper, in this, the review’s seventh paragraph.

Mario Kart takes the familiar inhabitants of the Mushroom Kingdom and places them behind the wheels of go-karts armed with Koopa shells and banana peels. It’s an odd choice that should have been a one-off experiment back in 1992. And yet risk has given way to formula; Kart is now one of Nintendo’s most venerable series, regularly outselling the established trinity of Mario, Zelda, and Metroid games. With success comes imitation. Many have tried to reproduce what should be a fairly easy recipe, but nearly all fail. So what makes these games, and this seventh in particular, so darn compelling?

Few games produce in me the same level of unrequited zeal. While playing Mario Kart 7 in my apartment, with no one else around, I hoot and holler aloud as if to a captive audience. Even racing the computer, I’ve cursed the ancestral line of more than a few Shyguys for their programmed attempts at pushing me off the track into a starry abyss. Today, the game taps into the same frothy rage whipped up years ago during after-school play sessions against buddies. That such intensity is derived from a world evoking harmless joviality, its primary color hues masking the deep red in your bloodshot eyes, creates something of a dissonance that elevates the game beyond its surface description. You don’t play Mario Kart. You swallow it up, drinking from its vital spring like a parched beggar laps up sidewalk puddles after a storm.

The game’s a crackerjack, a soothing reminder of all that fans have loved before.

But of course this feeling, of losing time to a fictional pursuit, isn’t ingestion but immersion. It is we that are inside the game, not the other way around. The Nintendo 3DS version makes this clear in a way previous sequels do not. The system’s three-dimensional visuals, though subtle, give each race a fuller, more robust sense of perspective. Old weapons feel new: witness the Squid Ink squirted into your driver’s eyes, covering the screen while the background action is barely visible beyond the smear. (You can even choose to race as your personal Mii avatar, a holdover feature from the Wii game that literally puts you behind the wheel.)

You can also choose to race in the first-person. This enables steering with the device’s built-in gyroscope, meaning you physically turn the entire 3DS in order to steer. More than anything, the option provides a level of self-appointed challenge: Can you win with such a blatant handicap? I guess you could do that with any game. Play with your eyes closed! Play one-handed! But having the option built in allows Mario Kart 7 to react accordingly. If a player steers during an online race, their results show a tiny wheel icon—a twist of the proverbial knife to the rest of the field, knowing they lost to someone tilting their device like a resistant Etch A Sketch.

Some will point to the inclusion of Gliders (giant wings that sprout from your kart in mid-air), Propellers (underwater motors), or customizable karts as this version’s most ambitious upgrades. But the game’s use of the 3DS StreetPass provides the more resonant change. Walk around with your 3DS in your bag and it will track those who you pass, physically, in real life. The system passively transmits basic info, including data from specific games. For Mario Kart 7, it exchanges recorded ghost-versions of your best performances; you can now play with fellow commuters, sidewalk joggers, and next-door neighbors without ever meeting them in person. Nintendo doesn’t just want to capture you within the game—now even passers-by are subject to your save file’s Gluttony.

You don’t play Mario Kart. You swallow it up, drinking from its vital spring like a parched beggar laps up sidewalk puddles after a storm.

Sometimes, this provides unique opportunity. I teach at a nearby college. After class one day I passed a former student. Later that day, I raced his best effort in the privacy of my home. (I totally smoked him.) In all likelihood, I never would have challenged him to a race. The feature makes possible interaction that otherwise would never take place.

Other times, it allows our worst tendencies to blossom: when a fake connection replaces all those missed along the way.

On the subway, a girl was playing her 3DS right in front of me. I leaned over and peered at her bottom screen: Mario Kart 7. She had pulled-back sandy hair and wore a beige coat. Around her neck hung a silver necklace, the pendant a lowercase “a.” Next to her, an open seat. My 3DS was in my bag. I could sit next to her, pull out my system, challenge her to a quick match. But I didn’t. My cowardice prevented me, along with the East Coast Law of Avoidance that had solidified around my more amiable, Midwestern heart. Surely it would’ve been a joy: strangers colliding like a well-aimed green shell. Instead, I stood there and scrawled notes on my hand-“silver necklace, beige coat”-and glanced at her, this potential Player 2. I consoled myself with the knowledge that later, I’ll be able to bring up her StreetPass profile and challenge a transparent stand-in that will drive her best time on a given track. This is undeniably cool. But also sad, because this false race will be a reminder of my own ineptitude. The game allows me this way to relate to a stranger I could have spoken with, but didn’t.

That this data comes in the form of a specter is quite apt. The game has finally eaten me up; I’m but skin and bones, or less—reliant on the whims of code to form connections I never tried to make. All these people we see, on sidewalks and trains, in line for coffee, in that dismal room awaiting our test results/teeth-cleaning/renewed license, in silent stasis while the elevator goes down—so close to so many, all the time, but rarely together, like souls on one side of a soundproof barrier, separated from the living. And no one ever bangs on the glass. Every day we pass one another, the reciprocal ignorance too easy, too common. Now we’re in range, now we’re gone. Another missed opportunity. We might as well all be ghosts.