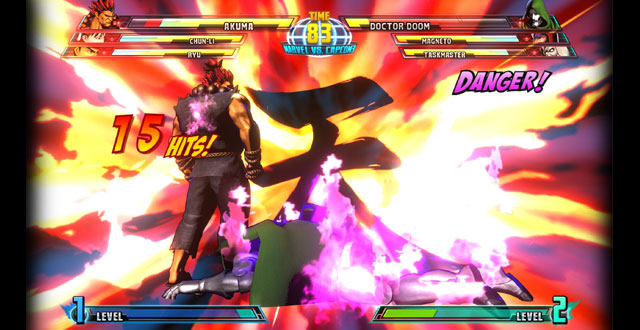 It’s not a blur simply because of how fast it is, although it is fast. As someone more accustomed to Street Fighter‘s seemingly more deliberate movement, I was vastly unprepared for the frenzied pace of Marvel vs. Capcom 3. Matches had barely begun before they were lost, and frequently I could only sit back in awe as chaos and color rained down upon me.

Lasers. Rockets. Double jumps. Triple jumps. Air dashing. Teleportation. Magic. Any combination of these can be happening at any time, so that simply comprehending the action feels like a significant achievement. Characters from wildly disconnected universes are thrown together: The Shinto wolf goddess Amaterasu, assisted by a pirate-operated, flame-throwing robot, conjures up her powers to battle with a spider-bitten, web-slinging New Yorker. It’s a wonder that Capcom managed to put all these characters on the same stage in a way that makes sense stylistically.

The dazzle lures you in, but the feeling of energy is what makes you linger. Your onscreen character can move with such agility, and your fingers need to react not only with quickness, but also with rhythm. Attack high and hard, tap low with another finger, tap light with a third, then launch your opponent into the air. Follow them into the air—pause—tap, tap—pause—tap. Knock them to the ground—double-tap to unleash a devastating special, then cancel, pause, and double-tap again. It’s an aggressive yet meticulous sequence to be sure, a physical performance through the controller.

I’m not a martial artist, and I’m certainly not a superhero, but Marvel vs. Capcom 3 somehow lets me feel what it may be like to put on a performance and move like one. David Foster Wallace once described this type of feeling, in relation to sport, as a “kinetic beauty.” It’s a kind of awe at what the body can do in spite of its fragility and imperfection; and the fighting genre seems uniquely suited to the digital expression of this form. Fighting games offer players the most extensive control over a character’s actions, but they’ll always have to contend with the fact that replicating the physical movement of the body is not something a few buttons and a joystick can do. The best we can hope for is an abstraction, and so the most successful fighting games transcend these limitations. Those of us who cannot be great athletes are given a chance to experience the feeling of athleticism. Or, at least, what certain developers think it feels like.

Marvel vs. Capcom 3, what with its superheroes and robots, takes exhilaration, visual splendor, and physical power to the extreme end of the spectrum. But its greatest achievement, and its most notable letdown, is how believable and unbelievable it makes this feeling of kinetic beauty.

The game is accessible and satisfying enough to allow anyone to perform moves and specials. Slowly mastering its secrets is thrilling, and one successful combo attempt was enough for me to feel like I had to do it again, better, and explore other possibilities. But strangely, even though the screen-filling attacks and mesmerizing visuals constantly reinforce the idea that the actions performed are of immense power, it doesn’t always feel that way. Thirty-hit combos strung together with special attacks are often unbelievable, in both senses of the word, and at times the action is a little too distant to be visceral. The feeling of kinetic beauty is sometimes lost amidst all the projectiles and explosions.

This puts Marvel vs. Capcom 3 in an interesting position. Its considered controls and unique tempo want you to feel something beyond the abstract, but its aesthetics can be overpowering. The illusion of chaos is strong, but the game’s movement is definitely not chaotic. In fact, it’s just as deliberate as Street Fighter‘s. It’s just not as intimate. That’s okay, though. This game knows how to put on one hell of a light show.