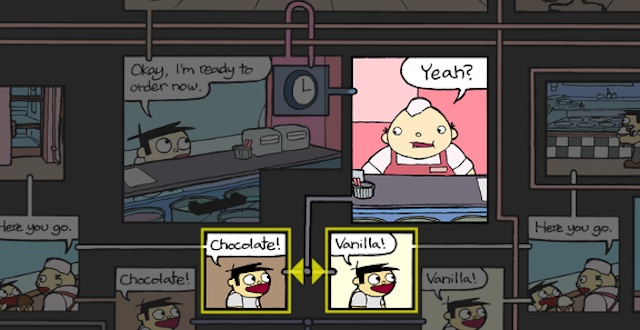 Of the many choices faced in Meanwhile the most significant one seems like the most meaningless one: Chocolate or vanilla ice cream? Tapping on vanilla leads me to a panel where I eat the ice cream and go home to live happily ever after. I start again. From chocolate ice cream I somehow arrive at a mad scientist’s lab and the choice of three inventions to play with: the time machine, the doomsday device, or a mind reader. From then on, the choices get a lot weirder.

Meanwhile is adapted from a choose-your-own-adventure comic book by Jason Shiga. Shiga says his inspiration was the “infinite canvas” that Scott McCloud proposed in his book Reinventing Comics. The idea is that comics, no longer bound by book form thanks to the internet, could tell more inventive stories in different ways. Meanwhile started as a series of flowcharts, and Shiga tried using computer algorithms to try to transfer it into book form. The “problem” ended up being cracked after a few fruitless attempts. This origin story reveals what’s interesting about the book. Its physicality itself is a big draw for the experiment: the limitations brought on by the nature of the medium, and how Shiga overcame them. It is both a testament to McCloud’s idea, and a subversion of it.

The game doesn’t suffer from that restriction. Just tap on a panel and the game leads you to the next part of the story. Going back to your last decision is an easy button tap away. While playing it, I kept wanting to read the actual book again. I wanted to see how the book managed to turn these disparate paths into one, and make all these panels coherently connect. I liked seeing panels from several different paths exist on the same page, hinting at other stories I had yet to see.

The idea is that comics, no longer bound by book form thanks to the internet, could tell more inventive stories in different ways. Meanwhile started as a series of flowcharts, and Shiga tried using computer algorithms to try to transfer it into book form.

As advertisement, Meanwhile is effective. The original Meanwhile‘s most impressive features are the tabs and the way the book’s paths weave in and out of each other. After making a choice in the book, you follow the lines coming off a panel to a tab on the side that leads to another page, where the story continues. Going back, however, isn’t easily possible. Because the game allows for easy undoing of choices, it doesn’t encourage exploring the text as fully as it deserves.

You follow Jimmy, an 8-year-old boy, and the color and style mirror that of a children’s cartoon. The science-fiction story is pretty light, with introductory lessons on quantum physics and alternate realities, which conveniently explains and justifies its branching path structure. It twists in on itself, via time travel and other methods, and you’re rewarded with new insights through subsequent readings or playthroughs. Information from one session can help in future sessions. Meanwhile is a faithful adaptation—Shiga only revamped a few panels. It seems like a cliche, but it’s true: The book is better.