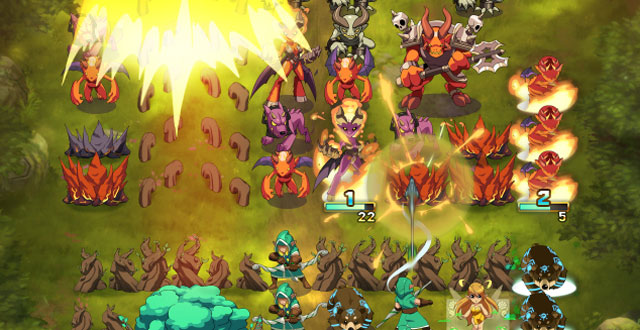 Might & Magic: Clash of Heroes HD has a slightly complicated parentage. The Nintendo DS game took the fantasy world of the PC series and wedged it into two opposing grids. Clash of Heroes leveraged puzzle mechanics, requiring players to create columns and rows of like-colored units to attack and defend.

This console version has rebalanced the game, adjusting unit strengths and charge times, and reworking abilities that threw matches on the DS out of whack. The game feels less dependent on luck. Capybara has replaced the 16-bit artwork of the DS game with hand-drawn animations (and the snappy transitions of the cartridge with frequent, drawn-out loading screens).

Where the DS only supported 1v1 local competitive multiplayer, the HD version allows for both 1v1 and 2v2 across Xbox Live and PlayStation Network. Which is why I am swearing at this beautiful game like an angry sports fan.

You have to get out of your head from the very beginning, and coordinate every move. The strategy game’s ego-commander, with its iron will and focus, only gets in the way here.

In 2v2, your partner and you share a bigger grid of units and a 100-point life bar. The units on each side are divided into two groups, purple and green, corresponding to each player’s control. You each make up to three moves in the same turn. There’s no hierarchy—you are equal commanders. The nature of the puzzle grid seriously limits your individual options.

Strategy games are all about control. There’s no role to play, no character motivation beyond winning. Even if there is a cooperative mode, you usually have a sphere of independent influence—you do your things first, and work with your partner later. In Clash of Heroes 2v2, working with your partner isn’t just beneficial; it’s absolutely necessary. Communication is very important.

But my headset was recently the victim of a hungry cat, and my partner (a random Xbox Live user) also has no headset. We’re having a bit of a failure to communicate. We’re in a 2v2 match against a pair named something like “HolyAlliancee” and “UnHolyAlliance.” I have a hunch they’re not running into the same communication problems we are.

Why won’t my partner pick up his Gremlin and drop it behind the Titan, one of our Champions? When it attacks, the Titan will damage all the enemy Elves’ contiguous walls, which would be really helpful, because their walls regenerate health every round, and make up almost the entirety of their first two rows. Our opponents have used their three allotted moves per turn skillfully, judging from the way they managed to turn a poor starting board into a mass of walls and attacking units.

Clash of Heroes‘ strategy is not immediately apparent. Planning ahead allows you to create multiple walls and attacks with one move, which awards you extra moves in the turn. Extra moves mean you can chain more attacks to deal more damage. Each move affects the present and sets up the future. When you’re playing solo, you can shape the field as you see fit.

But teamwork in 2v2 is a matter of blending futures. In theory, your partner and you have the same goal—to defeat your opponents. But you see different paths to that goal.

My partner and I have improvised a communication method. We can see each others’ cursors, and the units we pick up. I flick over to my partner’s Gremlin and hit the B button—I can’t interact with it directly, so a red X appears and a chime sounds. I hit the button a few more times for good measure; then, hoping I’ve got my partner’s attention, move my arrow over to the Titan’s column. He picks up the Gremlin and moves behind the Titan. I’m pleased; we’re going to be able to coordinate, and maybe make a comeback!

Then my partner drops the Gremlin behind two other Gremlins—next to the empty spot that would have activated the Titan—and all my maneuvering in the past two turns to set up a massive attack on the Elves’ walls is sacrificed by my partner.

He is dinging a pink Golem in the middle of a column. He wants me to delete it, and I’ve one move left. Three dings. Now four. I end the turn instead—the Golem undeleted and my impotent Titan avenged. After the Titan incident, we’re not likely to defeat the Elves. But damn it, we’re going to lose my way. I‘ve begun to take control of our field.

Or I’ve just rationalized being an Xbox Live troll.

No unit in this game can do anything on its own, and that philosophy carries the 2v2. That’s why acting solo is so destructive to your cause. You have to get out of your head from the very beginning, and coordinate every move. The strategy game’s ego-commander, with its iron will and focus, only gets in the way here. Mastery of Clash of Heroes is no longer about seeing and arranging the patterns. You have to break years of training from games that have told you that you are the most important person in their world, that everything is there to react to you.

If one Clash of Heroes player does dominate the decision making, it requires the other player to all but disappear from play, providing an extra set of moves for the lead player.

Later, we’ve once again got a Champion unit almost ready to attack, with three of the four necessary units behind him. My moves are gone, but my partner still has his three. All he needs to do is pick up one of his Gremlins and drop it behind the Champion.

Instead, my partner moves two of the units away from the Champion, and drops them into nearby rows. I am shouting. Then my partner deletes another unit—and the resulting cascade creates three rows of walls for us, right in front of the enemy Champion preparing to take us out. The walls stop the attack, and we live to fight another round. Maybe I needed to pay more attention to my partner. Maybe his strategy was superior to mine the entire time. Maybe, instead of shouting at the screen, I should have typed him an Xbox Live message.