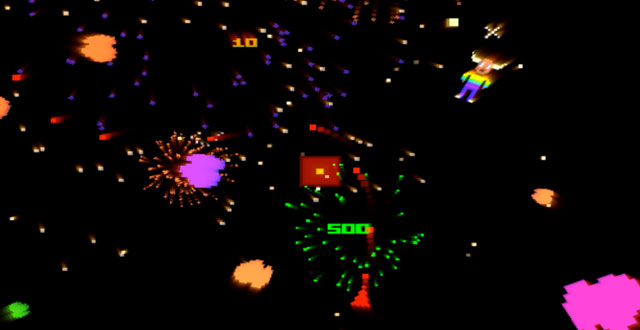 Does it matter why these minotaurs insist on riding asteroids straight into the sun? Maybe they are the victims of a tragic intergalactic mining accident. Or perhaps, long ago, Hercules banished them from their home on Crete by tossing them into space. And why have we, the players, been condemned to die along with the stupid beasts, throwing away the last moments of our lives in a farcical attempt to delay their extinction? The answer seems to be that these situations exist so that things might explode, thus incrementally advancing a cosmic scoreboard that gives pleasure to some cruel god.

Minotaur Rescue is the first game in Llamasoft’s new Ataurus project, an effort to capitalize on our collective—perhaps largely false—nostalgia for chunky sprites. It’s a game that will feel familiar to many, focusing on one spaceship’s plight to survive as long as possible inside an asteroid barrage.

There are four different scored modes: “Solar Minotaur Rescue Frenzy” and “Deep Space Minotaur Madness,” and Survival variants on each. These are packaged with locally competitive (two-player or against an AI) tank and jet matches, whose seemingly odd inclusion will make slightly more sense to anyone who remembers Combat‘s 27 modes. The art assets for the score, the ship, and the asteroids look almost indistinguishable from those of the Atari 2600 port of Asteroids.

So is Minotaur Rescue just an iOS version of 2600’s Asteroids? The license that Llamasoft takes with older titles is, essentially, what you’re paying for: the obnoxious sound effects, omnipresent score multipliers, crowded screens, fuzzy visual obfuscation, and quickened action. It’s better to think of it as a mod, and an extensive mod at that—one that freely plays with the coherent diegetic space of the original.

For instance, Minotaur Rescue features screen wrap for your ship and its bullets, so that when you move off one side of the screen, you appear on the other side—just like in the original. But the other objects on-screen don’t wrap. This may cause some cognitive dissonance, but it’s a fair workaround for the simple exploit that made Asteroids so easy to game: the practice of hanging around the edges of the play field in relative safety, always knowing when asteroids would creep onto the screen near your ship and fooling hostile UFOs into shooting in the wrong direction.

While “Deep Space” mostly resembles the original Asteroids, “Solar” borrows the center-screen gravity well used in some versions of Spacewar!—a sun that exerts a pulling force. Asteroids ignore the sun’s pull, but they often appear on a collision course for the center of the screen. Whenever an asteroid or a minotaur collides with the sun, it expands slightly. This rule is what prevents players from sitting back and killing UFOs for points, like one could in the original Asteroids.

Once the sun’s size reaches a critical point, it disappears into a violent vortex that quickly sucks all objects on the screen into a black hole. It’s possible, though difficult, to survive this. The threat of the sun’s growth is a really effective way for the game to focus the player’s attention, given its frantic nature. The player can slingshot bullets around the gravity well—a highly satisfying tactic when asteroids crowd near the sun—but this comes at the price of dangerously piloting against the sun’s pull. A collision between ship and sun results in a lost life.

Minotaur Rescue demands a gentle touch, and it might draw some ire from those who avoid imprecise controls on principle. You’ll also be disappointed if you’re one of those masochists with a taste for accurately complicated space-flight controls. Finger swipes control directional motion and speed, and bullets always fire straight from the ship’s nose. The problem is that, if you’re used to the kind of broad swiping called for by your average iOS game, you’re going to end up careening across the screen toward your death. (I’d suggest watching this video of Jeff Minter playing the game to learn how to make the tiny thumb movements that seem best suited for play.)

Once you’ve got the basics of survival down, you’re ready to get into the scoring system. In Minotaur Rescue, the minotaurs that sometimes emerge from a cracked asteroid grant significant boons to score, and they amplify the speed with which the player’s ship spits bullets. Minotaurs are worth more points the closer they are to the sun, which provides an intriguing bit of risk and reward to the otherwise rote ask of collecting them.

Just as in Asteroids, UFOs can be the key to a new high score. But it’s not UFO kills that count the most: They periodically drop mines that can be farmed for points. This is easy in the beginning, but these mines become more and more dangerous as the game progresses. Somewhere around the 100,000-point mark they become homing bombs that can instantly destroy your ship, and some UFOs spawn them ridiculously rapidly (as in, 20 within a five-second span).

Points rewarded for destroyed asteroids steadily increase the longer one stays alive. Dying resets the ship’s attack speed and the asteroid score counter. While it’s possible to rack up quite a number of extra lives, it’s somewhat disappointing how quickly the experience deflates once you suffer that first death. All of a sudden, you’ve got a measly attack speed and your scoring potential goes through the floor. You also don’t get a tiny period of invulnerability after a collision or death—meaning you can rapidly lose all of your lives within a matter of seconds. It’s kind of needlessly brutal and self-defeating—perhaps a fatal flaw; or maybe the apotheosis of the importance of that first life in any scored game.

Nothing entirely makes sense about Minotaur Rescue—the highly selective screen wrap; the variable pull of the sun on different objects with no relation to real-world physics; the fiction. But none of this matters, because it is one of only a few truly great score-chasing iOS exclusives. If you’re looking for a game that will tell you a story, or provide insights into the human condition (whatever the hell that is), look elsewhere. If you want to master a well-designed system and humiliate your Game Center friends with a fat, juicy number, welcome home.