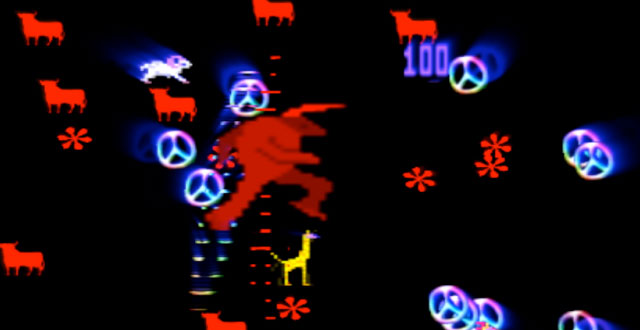 Jeff Minter may very well be an evil genius. Among a certain circle of game journalists, developers, and enthusiasts, he is revered as one who manages to produce games with his own voice, concerned only with his own motivations—at the expense of the average consumer. When you play a game by Jeff Minter, you are, in a very real sense, playing Jeff Minter.

Jeff and I first “met” when I downloaded the first entry in his iOS-based Minotaur Project, Minotaur Rescue. I loved it. All of Jeff’s choices made sense to me, from the sparse retro sound effects to the blurry neon graphics and even the unorthodox control scheme. They coalesced into something truly special.

Minotron: 2112, though, is confusing. A throwback to the 1982 arcade classic, Robotron: 2084, the game has you controlling a minotaur shooting hordes of surrounding enemies from an overhead perspective. The controls are a thoughtful modification of the standard virtual joysticks used by many iPhone and iPad games, allowing you to touch any portion of the screen to run or shoot. But the titular minotaur seems to move and turn rather sluggishly, a sensation that feels oddly imprecise in a game about avoiding enemies. Meanwhile, firing is limited to eight static directions, so the concept of accurate aim is mostly absent. This unfortunate carryover from the original Robotron causes you to spend most of your time avoiding rather than actively shooting enemies, an activity that quickly becomes repetitive. You are forced to strafe across the screen, hoping that a power-up will allow you to bypass shooting altogether. The deeper you get into Minotron, the more it becomes a simple waiting game for an invincibility power-up or bomb.

It’s hard to understand why Minotron embraces the limited nature of Robotron’s control scheme when Minter was unable to limit himself to traditional bleeps and bloops for the audio design. The muffled, robotic sound at the start of each level, the distorted power-up samples lifted from movies and other cultural artifacts, and worst of all, that awful minotaur death yell, all drive me away.

I like the look. I really do. The enemies—an absurd mix of corporate logos, food items, household appliances, and other found objects—add a surprising aspect of discovery to a game like Minotron. This over-the-top absurdity works because it adds variety as we progress through the game. But when I turn up the sound, Minter’s repetitive and generally unpleasant audio flourishes start to feel like part of a conspiracy to make me clinically insane.

In his previous game, Minotaur Rescue, a central gravity-inducing sun threw all the elements off-balance. This chaos was pleasurable  because it disrupted the overly familiar mechanics of Asteroids with something that felt logical and manageable. But with Minotron, the chaos is purely aesthetic, and as a result it feels forced. At the 48th level of 100, I’m starting to think that Jeff Minter doesn’t want to hang out with me anymore.

I know Jeff Minter is an evil genius—because in spite of all of these confounding aesthetic choices, I keep playing. I am determined to beat Minotron: 2112, even if it doesn’t happen until I’m 85, when I’m certain I will have a very similar reaction to the games that my kids will play. Maybe, like other evil geniuses, Jeff Minter is just ahead of his time.