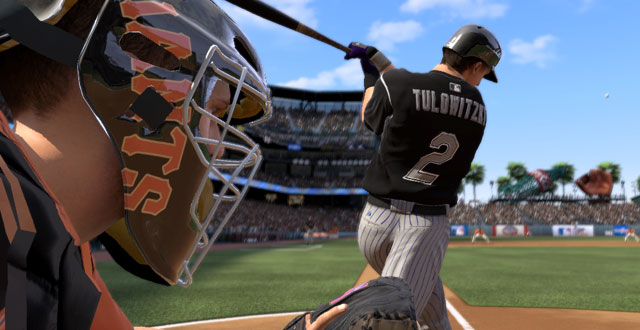 It’s a Triple-A game in June between the two worst teams in the Pacific Coast League and, yet, I’m facing Casey Kotchman with a one-run lead in the seventh inning and it scares the living shit out of me. I vaguely remember Kotchman as a serviceable, possibly power-hitting major leaguer, but I can’t even remember the last team he played for. That his mug shows up at the bottom of my screen with a generic “MLB” cap isn’t helping. But, after a couple of seasons of experience in the minors, the pitcher I created in Road to the Show knows damn well there’s hell to pay for just one lazy toss—especially once you’re past your pitch count and haven’t given the manager a reason to pull you yet. You learn that after being taken deep by castaways such as Jeff Borgeouis, Eric Young, Jr., and DAVID FUCKING ECKSTEIN. Long story short, pitching has never been this exciting in a baseball videogame.

It’s undoubtedly what makes MLB 11: The Show a vast improvement over years past. Yeah, yeah … Season Mode, Exhibition. They’re MLB 10 with updated rosters; and the new analog controls are a huge upgrade in batting and pitching (not so much on defense). But the meat of the series is Road to the Show, a genius innovation that finally acknowledges how baseball is probably the least team-oriented sport. Or, to put it another way, Road to the Show capitalizes on the selfishness of the gamer who is interested in a career mode, as long as it only involves his own career.

MLB 11 makes a major upgrade in Road to the Show: it’s way easier. Life’s too short to spend $60 on an experience where getting the occasional at-bat for the Las Vegas 51’s while sporting a .280 OBP for three years straight appears to be the ceiling. Here, you can collect points for things that go beyond the box score—put-outs, taking pitches, and the like. But more importantly, MLB 11 does something so ridiculously obvious, you wonder how we’ve gone nearly 20 years without it. The game makes pitching something other than a spectator sport.

And that is what makes this Road to the Show an unusually absorbing experience: Every pitch feels like there’s something truly at stake. Without putting your rotator cuff at risk with Wii-like movements, pitching introduces an honest-to-goodness physical aspect to MLB that’s deceptively, and appropriately, taxing. Each pitch requires minute hold-and-release movements for each thumb. If you slip up, you grit your teeth for a few seconds at what missing the mark hath wrought.

Then again, it can feel fairly arbitrary—my created player undoubtedly has the highest BABIP in Triple-A, and I’m fairly certain he gives up 95 percent of his runs when there are two outs. Simply put, this is a horrible game to play while drunk, and especially while hungover.

Thanks to legendary and now-defunct blogs in the manner of Chauncey Billups and FreeDarko, it was my understanding for a good while that the NBA was, on the sly, the league of choice for the sort of hardcore, statistic- and aesthetic-obsessed type that naturally crosses over into music criticism. Well, I won’t name names, but I had the pleasure of participating in a fantasy baseball league administered by a popular music publication primarily associated with indie rock, and it completely blew my theory. The white-hot intensity of my competitors resulted in my ass being handed to me, and I checked out after about a month.

What does this have to do with gaming? Pretty much everything. Particularly in sports, there’s an uneasy balance between the desire for a true simulation and a more action-packed experience. The “fantasy” version of baseball is almost completely at odds with the traditionalist values of the “eye test” and grit. While baseball has spawned all kinds of strictly managerial sims, how does one incorporate the physical aspects of baseball, as well as the theoretical—without making it too arcade-like and unrealistic or, alternatively, as plodding as the real thing?

But for all its conceptual differences from other sports in videogames, MLB 11 ends up being every bit like NBA 2K11—it’s got you by the balls if you absolutely need that sport to be available to you on PS3. The learning curve might be a bit steep if you want to get the most out of Road to the Show, but it’s not like there’s much else going on in sports during the summer. After all, Madden doesn’t come out until August.