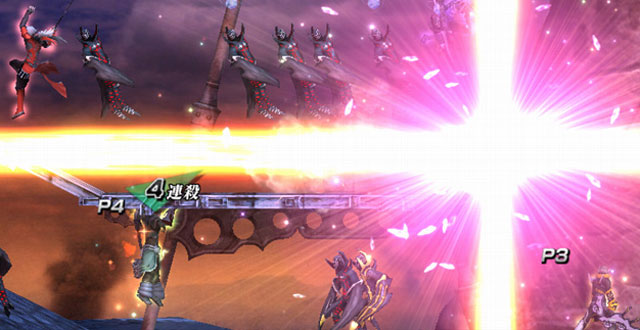 Perfectly competent videogames come along every day, faster and on more platforms, to the point where someone who has played them for more than five or 10 years yearns for more than the solid framework beneath a good action game. Moon Diver is built upon years of established console game design. But if a title like Moon Diver is so steeped in the lore of great games, why does it feel so average-at-best? Playability isn’t enough anymore.

Moon Diver’s modus operandi is locked into old 8- and 16-bit era action games like Ninja Gaiden, Strider, and other dash-n-slashers. If it was 1989 and I only had access to three games, and Moon Diver was the one I hadn’t quite beaten or mastered, I would be shuffling dutifully through. This one isn’t exactly terrible, but neither is it great.

The setup: A demon-man has emerged from the ocean, or space, or the space-ocean; it’s not exactly clear. You and your primary-colored super-ninja compatriots have been training for years to take him down. There’s little explanation beyond the game’s barely comprehensible surrealist avant-poetry cut scenes. Whatever the reason, now that humanity is almost wiped out, it’s time for you to swing weapons and collect magic while running across the screen.

I want to say that Moon Diver is unplayable, but it’s not. The game hits the appropriate notes with regard to running, cutting enemies, finding collectibles, branching paths, etc. It’s a rock-solid formula that’s been working for years. Of course, following a recipe will yield merely serviceable results, so Moon Diver adds a pinch of the role-playing spice of “grinding.” You are cheated out of a dynamic gameplay experience where you figure out enemy weaknesses and perfect the timing of jumps and dodges, and instead get a more powerful sword swing in exchange for hours spent slaughtering standard enemies. If the boss’ moves are too tough to analyze, just level up until you can stand there and slash without sweating.

No one is going to talk about Moon Diver on the playground in the morning.

The larger crime here is everything around the game. It looks like a bargain-bin PlayStation disc, as most 3D-rendered side-scrollers do (contrast with the charm of the Super Nintendo’s Mega Man X). Any flair is lost in muddy tones and indistinct character shapes flying around bleak urban wastelands. The music is equally obstructive. I get that Japan is into hyper-compressed electro-metal, and sometimes that is cool! But does it have to be twice as loud as everything else? The volume was fine when I turned on the Xbox 360, but every level’s theme sent tiny clashing insects to burrow eggs into my ears. The sound effects are just as grating—if your game requires the pressing of one button many thousands of times in a single stage, do me a favor and don’t have the character say anything when pressing said button. Those first few grunts were convincing, but the last billion aggravate an already over-stimulating score.

I feel actively repulsed, rather than invited, into the world of Moon Diver, as if it’s too badass for your eyes and your ears. Maybe 8-bit sound design forced early designers to contain their expansive power-rock whims within the limitations of the hardware.

What is the worth of all this effort? Twenty years ago, faults could be construed as challenges and story was a secondary (or tertiary) concern. While going through Moon Diver I’m constantly thinking of older titles like Athena or Trojan, the kind of thing one would master on sheer will. Both Ninja Gaiden and Moon Diver force repetition on the player, but while Ninja Gaiden teaches the player how to play, Moon Diver demands that you kill drones until the game has decided you’re worthy of a harder swing and more hit points.

Beyond that, Moon Diver is the definition of generic. No one is going to talk about Moon Diver on the playground in the morning.