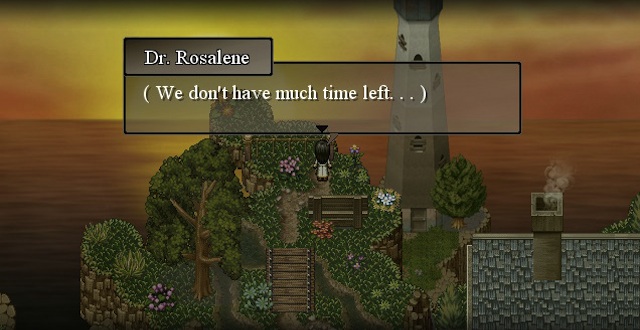 Title:
To the Moon

What a strange experience, playing a game about a man on his deathbed, as someone close to me awaits his death in real life. To the Moon is barely interactive, a barebones graphic adventure that puts all of its focus on telling a very specific story. Control amounts to walking around a static landscape and pressing the space bar. Sometimes text boxes appear and conversations happen. You press the space bar some more.

But how else would you play a game about a dying man, anyway? There’s no real control in this situation—there’s no action for you to take. The interesting parts of an imminent death take place entirely in the minds of the observers, in the hearts of the family, and in the life of the dying.

When someone you love is dying, you evaluate your options only to find that you have none. When it’s too late to save them, all that’s left to do is appreciate them. If you’re lucky, you get to sit with them and listen. You get to say your piece and allow them to say theirs. You pause. You leave space. You wait.

But in To the Moon, John can’t talk. He has no living relatives who will sit and listen even if he could. He merely has memories. The conceit of the game is that he wants these memories to reflect his life’s ambition: to go to the moon. John never speaks directly to the two scientists who travel through and attempt to change his memories. The player alternates between the partners and ultimately arrives at John’s childhood to redirect him to a life in space. As it happens, though, there’s very little to do at first besides simply observing John’s life. The scientists explore his memories in a mode of discovery. Like family members visiting their loved ones during the last days, we spend less time considering strategy than considering the history of this one man’s life.

Even though it masquerades as one, To the Moon is not exactly a feel-good story.

The memories span a multitude of times and places, always flowing backward, farther and farther into John’s past. The player forages through his mind, desperate to discover who he really was, what motivated him to make the decisions he did, and why he wants to change them. As we move backward, we discover with each stop something new that illuminates John’s character: his choices, his passions, his relationships.

We find that John is a timid boy who grows into a timid man. We find that he gives himself to his wife in ways that those around him can’t understand, and that at times even he doesn’t understand. We grow to love this videogame character because of the sacrifices he makes for others in his life, and because of the way he persists in those sacrifices without complaint.

There are numerous, undeniably boring times when we’re forced to walk around searching for artifacts that are important to John: a dead rabbit, a soccer ball, a backpack, or a stuffed platypus.  Hunting down the objects themselves isn’t what is interesting—it’s finding out what infuses those objects with meaning. What is it about the soccer ball or the backpack that causes them to mean so much to John?

Those in-between moments, where you wait for something to happen. Explore.

I sit down on the couch at my parents’ home, waiting to see what this visit is going to be like. My dad has visibly changed because of the cancer. Spacebarspacebarspacebar get on with it, dammit.

So time passes and the dialogue continues, as I sit there doing very little except observing and considering. I remember him as my dad when I was a young boy, a heedless teenager, an idealistic college student. I remember his memories from my perspective—when I was too young to appreciate the moments that he made sacrifices and worked diligently to be a good dad. We eat Thanksgiving dinner. I visit with him outside on the porch. I consider the times I passed up an opportunity for conversation, all the wasted moments and lost opportunities; and I feel like I need to tell him things, like I want to blurt out a checklist of things every son should one day tell his dad. But these attempts to proactively “solve” some problem do nothing but crowd the moments. I ask questions and listen. I sit there, press space bar, and back in time we go.

And it’s like this: There’s a side of him that I’ve never seen, that I never let unveil itself before me. There’s sincerity, a dark sense of humor, a satisfaction with his life, and a surprising amount of wisdom. In this context, I’m suddenly able to appreciate these things in a concrete way, just an admiring fan taking it all in, wanting to hear every story.

On its face, To the Moon is a lovely story about a dying man’s wish and how he is redeemed by it in the end: the player succeeds in changing his memories, providing the man with a sense of total, uncomplicated satisfaction just at the moment that he dies. But below the surface is the reality that those changed memories are confined to John’s imagination. They don’t change history, or improve his relationships in any concrete way. What really matters in this story is what the player discovers even in the midst of their attempts to change it: John’s selfless love for those close to him, even in the face of bitter heartache.

Even though it masquerades as one, To the Moon is not exactly a feel-good story. No story about death should be, anyway. In A Grief Observed, while writing of the recent death of his wife, C. S. Lewis explained:

It is hard to have patience with people who say, ‘There is no death’ or ‘Death doesn’t matter.’ There is death. And whatever is matters. And whatever happens has consequences, and it and they are irrevocable and irreversible. You might as well say that birth doesn’t matter. I look up at the night sky. Is anything more certain than that in all those vast times and spaces, if I were allowed to search them, I should nowhere find her face, her voice, her touch? She died. She is dead. Is the word so difficult to learn?

In John’s case, even though he may feel better about his past, the player must acknowledge the obvious: that he succeeded at some things, but he also failed at some things. That he lived, but then, eventually, he died.

There is a moment in To the Moon when the two scientists you control finally have the opportunity to redirect the course of this man’s life. The two debate whether this is such a good idea, because it requires removing a key source of his happiness from his childhood: his future wife. She was holding him back. The tension in that moment is appropriately thick, and I never could bring myself to make peace with the decision to move her “elsewhere” during his childhood.

It’s at that point that the game leaves reality and relevance and shows us “what could be” if such a technology existed. It presents us with a final, joyous memory: a perfect love story, framed by a perfect life with nothing but fulfilled ambitions—a memory of something that never happened. John’s relationship with his wife in this new reality is seamless and easy. Obstacles are conveniently removed and goals are met without any real friction.

Below the surface is the reality that those changed memories are confined to John’s imagination. They don’t change history, or improve his relationships in any concrete way.

But let’s rewind again, to the original memories. The difficulties John faced trying to please, care for, and understand his wife. The ways his friends misunderstood the things he did for her. How living in the shadow of his dead brother and under the authority of a shattered mother prepared him for a life of admirable empathy and sacrifice. And let’s marvel at the ways he persisted. Let’s listen again to the doubts he had, the ways he overcame them, and the things he still struggles with now.

To the Moon demonstrates the value of investigating a man’s dying wish—of walking around in his motivations, his regrets, his proudest and weakest moments. But it also demonstrates the ways that a fleeting wish or regret can undermine a life of true nobility and honorable pursuit. The famous Antarctic explorer Roald Amundsen said, “Adventure is just bad planning.” To the Moon demonstrates the flipside: it’s a story about a man who had the chance to plan his own adventure, but lost all the best bits in the process.

When the death of a loved one doesn’t come suddenly—when it lingers instead in the air, threatening to crash at any moment with a thud, you stop fighting imperfections and start caring about how they’re met. It’s a constant struggle for the player to allow To the Moon to set the direction and tone for the majority of the game—if we can play it, we expect to be able to play with it. But To the Moon pares down the interactivity until it’s barely there, leaving the player with little more than a chance to get to know a dying man. It’s a gift, and an opportunity to acknowledge his truth. It’s an occasion to explore, to forget the need to seize control, and to simply offer yourself up.

Always on the space bar, ready to move forward, when you’re ready; when he’s ready.