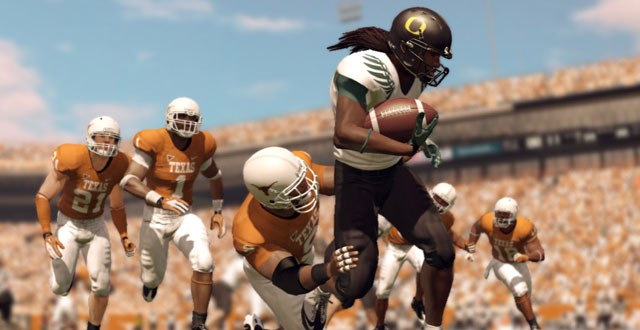 Upon tearing open the shrink-wrap of my copy of NCAA Football 12 like a grizzled and starving prospector, three possibilities arose:

1. I had received a faulty, improperly packaged version;
2. Electronic Arts’ concern for the environment is far more intense than I ever expected;
3. Electronic Arts knows damn well you’ve bought NCAA Football every year since 2003.

Those aren’t mutually exclusive outcomes, but No. 3 seems like the most likely result of the “instruction manual” being a four-panel foldout with no actual gameplay instructions. And I suppose that’s understandable. It’s a strange thing to absolve a videogame maker of almost wholly shunning innovation, but seriously: in 2011, what could EA Sports feasibly add to this game and still have it be a college football simulation? Was it really worth your $60 in the past for the practice mode where you could run the Oklahoma Drill to your heart’s content, or the mascot game that revealed whether Sparty’s cartoonish musculature gave him an advantage in the trenches against, say, Aubie the Tiger?

Or, to put it differently, as much as it might enrich your life, engaging with NCAA Football 12 is an incremental and unsteady process similar to breaking in a high-quality pair of headphones, a cast-iron skillet or, um, a new romantic partner (this will make sense if you give me some room). You’ve been down this road before, but there’s a feeling-out process that’s not just advised; it’s mandatory before you really get committed. Get in too deep immediately, and you’ll end up seriously dissatisfied.

And that’s a pain in the ass, since the Dynasty mode is pretty much the totality of the game, and subject only to the kind of minor but immeasurably important tweaks that you start to appreciate after months. Which is not to say this Dynasty is simply last year’s model with updated player numbers, uniforms, and pre-game celebrations. In actuality, the most notable adjustment to Dynasty mode is the ability to start out as an offensive or defensive coordinator, and the attendant Coaching Carousel that revolves at the end of each year and allows a much more natural progression in your career than in years past.

This is crucial not only in setting up new barriers to taking pretty much whatever coaching job you want; but much like Road to the Show in the MLB: The Show series, it drastically reduces the actual time it takes to play a game by jettisoning all of the dull and custodian concerns of defense while still maintaining the identity of a sim.

You’ve been down this road before, but there’s a feeling-out process that’s not just advised; it’s mandatory before you really get committed.

Once you get used to the idiosyncrasies, you can customize your schedule to A+ difficulty with the brio of prime Fresno State. (Back-to-back away games against Florida State and USC? Sure!) A huge draw for NCAA Football 12 is that you really do need that home opener against Middle Tennessee State, not just for the win, but to determine by just how much you should win—the equivalent of sticking a meat thermometer into a pork tenderloin. It’s back to the kitchen if you can only eke out a seven-point victory.

And almost all of the fiddling will be done in the passing game, even if the new tackling and running engines were labored over the most. The strangest and most prominent flaw is that the slant pass is, was, and seemingly forever will be unstoppable. It’s damn near the equivalent of shady business happening in the recruiting game—something you basically just have to live with. If this past year is any indication, the EA and NCAA are alike in combating both by severe overreaction.

Besides being possibly the weirdest Super Bowl ever played, the 2003 match between the Buccaneers and Raiders was sullied by the claim of Tampa Bay’s defense that their head coach’s intimate knowledge of the opposition meant they basically knew every play Oakland was going to run and was thus able to jump every route. Regardless of what team you’re playing in NCAA Football 12, nearly every defensive back is on their Larry Brown shit while your receivers robotically stay in their lane if they don’t get manhandled at the line. And though Duke’s pass defense is laughable in real life, its front seven have all been blessed with vertical leaps that its basketball team would envy. Besides each defensive backfield resembling an archipelago of Revis Islands, you will get sacked with astounding frequency if you don’t release the pass two seconds before a rusher comes into contact with him. And in terms of leading receivers on deep routes or zipping it in there, your quarterback will have the nuanced touch of Meg White.

Paradoxically, the things that make NCAA Football 12 ridiculously frustrating just might make it the most entertaining (told you I wasn’t that far off with the bf/gf talk). Worse, you come to actually anticipate them, and stew in your resentment. Were you stopped just shy on a third and short? Your defense will give up a touchdown on the ensuing drive. Did you leave a half to a full minute on the clock before the end of the second or fourth quarter? Your defense will give up some kind of score on the ensuing drive (likely a touchdown). One thing you find out the hard way is that if you’re the offensive coordinator, you can’t control your special teams. Pull off an inspired two-minute drill to position yourself perfectly around the 25-yard line? Your kicker will miss that field goal.

The flipside is that pretty much every single game during the season will be more meaningful and hotly contested than it has any right to be—my first go resembled the improbable and liver-decimating Virginia season of 2007 that won an NCAA record five games by two points or fewer, right down to the 8-4 record and demoralizing bowl loss.

Which I guess explains why NCAA Football 12 can have so many nettlesome control issues and still get my stamp of approval. But in a weird way, all these foibles allow NCAA Football 12 to be interpreted as a misanthropic treatise on our social contract—throughout Dynasty and especially the RPG-style Road to Glory, the lesson is that your fellow man will fail you and be wholly unaware, let alone remorseful.

I mean, just try being a skill player in Road to Glory, where your future depends on the AI of the other 10 guys on the field—I run my routes perfectly, but apparently, my musket-arm quarterback has no idea I’m trying to score offers from the likes of Vanderbilt, SMU, and Baylor. Can’t blame him, since I’m still a Jewish kid from Pennsylvania, but damn it, I figure Videogame Me has no pro aspirations as a 5’7” possession receiver, so he might as well go to an expensive private school with insanely attractive women.

Instead, I spend most of my time blocking for a typical high-school offense that runs sweep plays 95 percent of the time; and three catches and 45 yards later, I’ve got Akron and Army sniffing around. That the realization of best-laid plans is left tantalizingly out of reach feels like NCAA Football 12 in miniature. Which I guess makes it the realest sports game ever made.