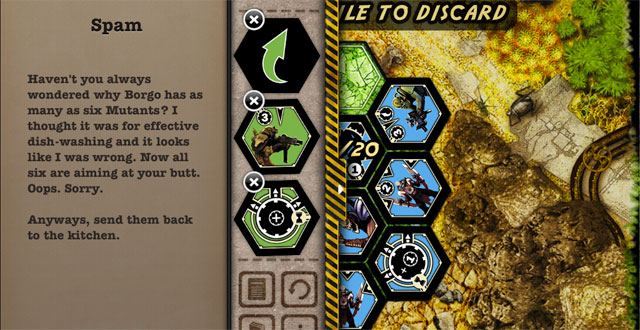 Picture the moment in Reservoir Dogs when people start pointing guns at each other, until tensions boil over and just about everyone gets shot. Over the course of a typical game of Neuroshima Hex!, you will set up and resolve that scene a half-dozen times. You are trying to line things up so that more of your guys are standing when the dust settles, and the other player’s outpost is out of health.

Neuroshima Hex Puzzle is Magic: the Puzzling for Neuroshima Hex!. The puzzles, called Hex-Aches, depict the last turn of a game of Neuroshima Hex!. You are presented some fiendish board situation and three tiles to play, and then the battle will be resolved.

The puzzles start out pretty easy, and could almost stand in for the (until recently) missing tutorial for Neuroshima Hex!. They very quickly escalate into fun tests of your ability to think through cascading sequences of attacks. If you like staring at a board position for several minutes, while working out complex chains of causation, then Neuroshima Hex Puzzle and Neuroshima Hex! are the games for you.

If you like polished user experiences, this may not be the game for you. It’s not that Neuroshima Hex Puzzle is full of bugs—but it is a game built on several layers of old construction, and that’s beginning to show.

We pause now, for a moment, to consider the role of writing in a puzzle game (based on a strategy game, based on a board game, based on an RPG). Writing can be useful for conveying instructions, offering hints to stuck players, or providing a little set decoration.

Each puzzle in the game comes with a snippet of text that mashes all three of those functions together. This is a bad thing. Instructions are for people learning to play a game. Hints are for people who are already playing, but are stuck. Offering a hint after I’ve been staring at the game board for an hour is an act of mercy. But offering the hint before I’ve even started makes me feel like a four-year-old.

There is a higher enforced-text-per-minute density here than in Myst, which, you may recall, is a puzzle game about being stuck inside books.

The story aspect is weaker, still. Given the existence of the RPG, there is a rich backstory to each of the factions. The game feels like it is torn between wanting to honor that setting, and its need for mechanical expediency. There is some attempt to convey the flavor of the different teams, but you jump between factions from puzzle to puzzle, and this doesn’t work out. I still can’t tell you the names of the four sides without looking them up. I can tell you that the briefing text for the final puzzle is of the “it was all a dream” variety.

And this is a game that has determined you should be reading the text. Every level’s snippet is shown on the puzzle-select screen, and then again as an unavoidable pop-over when you start the puzzle. It is shown to you again if you fail and restart a puzzle. In case you get lonely, there is a button in the main game mode that lets you re-read the snippet at any time.

You want the interface to get out of the way, too. Why do I have to tap on a level and then on the PLAY button, instead of double-tapping the level name to get started? Why does one button switch between OK and PAUSE (instead of OK and CONTINUE), and why does PAUSE not pause the level, but instead reset it entirely? Why does the big “SELECT TILE TO DISCARD” text obscure part of the board, so that you can’t see the situation before making a decision?

When you can manage to ignore the game’s text and interface, all of these annoyances fade. You spend most of your time just staring at the board, trying to peer into the future. Finally, you make a decision, place your tiles, hit GO, and watch your murderous Rube Goldberg machine play itself out. I want Big Daddy’s Creations to update Neuroshima Hex Puzzle and polish away the annoyances. But more than that, I want them to make more puzzles.