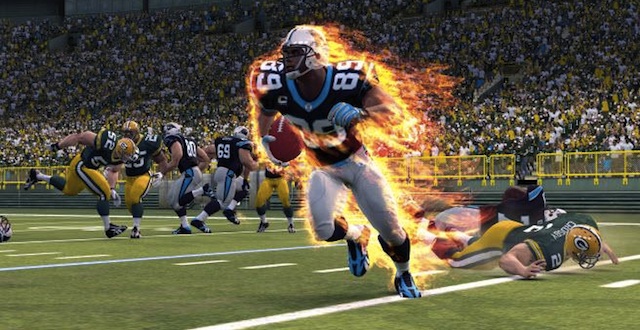 I don’t like football. You can blame that, like many things, on the fact that I’m Canadian. Toronto has a team in the Canadian Football League, but because the NFL snags the best players, we’ve been left with the has-beens and the never-rans.

There’s also the fact that football looks so complex at the onset. It does not have the fluidity of hockey, the athleticism of basketball, or the leisurely pace of baseball as a gateway. To the outsider, it is a game that looks thoroughly brutal and grotesque, and above all, needlessly complex. Players assemble like chess pieces, the ball snaps, something happens, and then it’s over. Football is frequently compared to war, perhaps because it is seemingly senseless.

But I keep watching games. Football asks for a certain perseverance. I watch and football starts to open up: a little ground gained on every play, new knowledge helping me decipher the sport and how it’s played. I’ve started to understand why sports videogames like Madden are popular with fans and players alike. They are football pop quizzes: a way to test and apply that hard-earned knowledge. Basic Football Problem No. 6: 4th and 7 at their 20-yard line. You’re down, 14-20, with three minutes on the clock. What do you do—and show your work.

The game floats in limbo between an arcade game and a simulation of real football. It’s like a racing videogame that makes you obey the speed limit.

In the late 1990s, around the time Madden was establishing itself as a videogame cornerstone—how many times have we heard a cousin or friend say that their two videogames are Call of Duty and Madden?—Midway released NFL Blitz into arcades and home consoles. The original version of Blitz positioned itself near its spiritual cousin NBA Jam, a heightened abstraction of the sport’s best elements. For NBA Jam, that meant capturing the velocity and back-and-forth of basketball. Five players became two players; players could push and shove; over-the-top dunking theatrics were encouraged. That’s why people watch basketball, even if it’s not why they truly appreciate the game. It’s the spectacle of basketball that Midway was able to tap into and that Jam embodies: basketball’s speed, fluidity, and style. NFL Blitz, meanwhile, went with over-the-top violence. Players could perform German suplexes; pass interference via tackling was allowed; hits could be performed after the whistle. The game was also sped up. More time was spent inflicting pain on the receiver than running the play.

What is the essence of football? It’s a hard-hitting game, but its sense of violence comes from its intensity. What used to look like chaos after the snap now strikes me as a military operation being executed, an intricate plan coming together. To every player on the field and to every fan at home, each tackle, shove, and hit seems decisive and immediate. Many of the old Blitz games, with their Keystone Kops speed, likewise felt like high-pressure situations, even if you weren’t a football fan. You were under a constant pressure, and when that ball soared 40 yards into the hands of your receiver, you were rewarded for not cracking under the pressure. Take away that speed and you get something less immediate. You get something that feels like the new NFL Blitz.

The series slowly withered to irrelevance when the NFL, not a fan of the videogame’s portrayal of football as a gridiron wrestling league, refused to renew its license in 2003. When Midway went bankrupt, EA Sports, the exclusive holder of the NFL rights for videogames, snatched it up. This Blitz remake is supposed to be a homecoming, of sorts. Yet it feels like a calmer, gentler game, which is a weird thing to say about a football game where you can climb onto somebody’s back. There is still roughhousing, plays can be interfered with, and impossible passes can be made (and will have to be made: first down comes with every 30 yards, not 10). But Blitz rejects the cartoon exaggeration of its predecessors. It’s been slowed down, and the trademark over-the-top violence is absent, with nothing in its place. The game floats in limbo between an arcade game and a simulation of real football. It’s like a racing videogame that makes you obey the speed limit.

There are other modes of play, which highlight the game’s identity crisis. Gauntlet Mode is a single-player tournament mode that unlocks novelty teams like the zombies and (non-Dallas) cowboys. It’s framed as a diversion but still plods. Another mode allows you to use “Blitz Bucks,” won at the end of every online game, to buy packs of cards and assemble your own team. Collect all of a team’s cards, and unlock a rare card. Each card has a finite number of uses, more incentive to keep playing and earning that cash. The game’s stab at simulation falls flat. All this is to say that Blitz is not a Madden waiting in the wings.

NFL Blitz is a team without a coach. It lacks clear direction, and the team doesn’t know its plays. The game’s faux aggression is transparent, a front that barely makes its presence felt. I don’t think they’ll get very far this year. Their past achievements will live on, but now they might as well be a CFL team.?