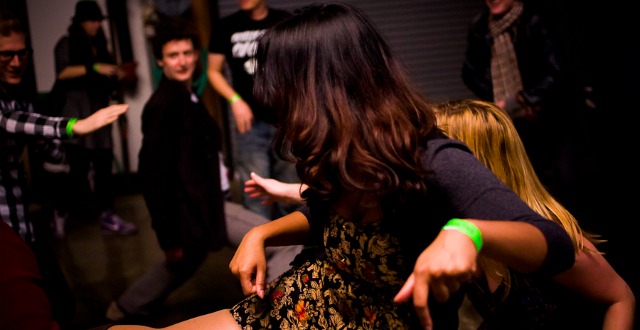 In a back-alley street, surrounded by warehouses and mesh fences, Richard Lemarchand, lead game designer at Naughty Dog Studios, stands posed under the single, buzzing streetlight. He is surrounded by fifteen assailants, their details hidden in the dim glow. All stand perfectly still; the only motion is the moth circling uncaringly around the overhead light. The figures attack Lemarchand one by one, but he pivots, spins, and parries the blows, striking back and taking out one more every turn until he stands alone.

And so ended my introduction to Ninja.

At the risk of pigeonholing it, Ninja is a live-action, free-for-all, turn-based, multiplayer, performative, combat-simulation game. Players stand in a circle at arm’s length. On the count of three (“1… 2… 3… Ninja!”), everyone strikes their best ninja pose and the game commences. Players take turns around the circle to make their attack—one fluid movement in an attempt to hit another ninja’s hands and knock them out of the game.

Crucially, when it is not your turn, you must stand perfectly still in the pose your last turn left you in—though you may move your upper body to parry an attack. Lashing out at another player won’t just leave you exposed to incoming attacks, but also risks leaving you in an awkwardly embarrassing pose until your next turn.

The idea of Ninja, of standing in a circle and trying to karate-chop each other, may at first seem trite, something you do for a laugh. But it quickly consumes all your senses. The action is swift, and the possibility space created by the rules is vast. Intensity grows as the circle breaks down. Players grow edgy, straining to focus on whose turn is next, where the next attack might come from, and where to place their next move. An attacker may pounce and miss, only to be struck back a split-second later by the very player they were attacking. A ninja must be aware at all times.

Beyond the thrill of competition, Ninja taps into an undercurrent of sheer, unadulterated play that adults rarely get a chance to explore. You are in public, in the middle of the street. People are staring at you because you are standing perfectly still in a pose you have not struck since you were on the playground in elementary school, but you don’t care, because this is deadly serious. To treat it as anything less would mean death.

A game of five players may attract ten curious onlookers, but they don’t laugh, point, or mock. They ask for an explanation of the rules and join the next game because, deep down, who doesn’t miss being a ninja?

Ninja is appropriate for all ages and can be played by as few as four players, though more are recommended. It can be played in any space, but is best experienced, in this reviewer’s opinion, in the middle of a San Francisco street at 1 a.m. after stumbling out of a warehouse party. More hardcore players may want to consider adding a Richard Lemarchand for the extra challenge.