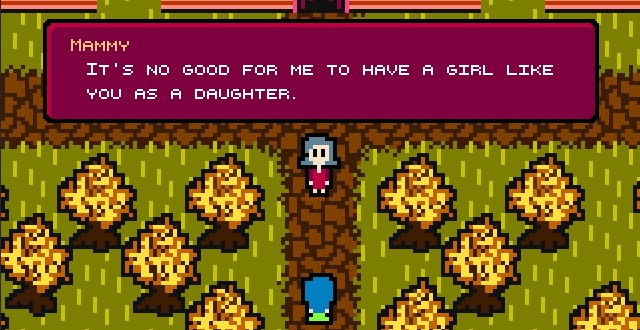 It means “good night” in Irish. The short Flash game, brought to us jointly by Terry Cavanagh and increpare, is rather cleverly named. Because it might give you nightmares.

You play Eimear, an innocent little girl with reprehensible parents. Within the first few minutes of the game, she has generalized and gendered insults hurled at her, orders barked at her, and all of her good intentions and affections dismissed by both parents.

Your mother asks you to set the table. You mess up the placement of the cutlery, to the chagrin of your mother who threatens you with the prospect of your father beating you for an honest mistake. You offer to fix it. She doesn’t let you, she’d rather you were beaten, and you don’t know why.

Even your absent brother’s dog, Buttercup, seems to want nothing to do with you. All she ever does is cry.

So when you’re ordered, you go to bed. There’s not much else to do anyway. You speak to your doll, Babby, because there’s no one else to speak to. And you hurl the same insults at her, because you don’t know how else to interact. You go to bed.

You awake to the sound of a gunshot. Eventually, you enter the master bedroom, and there they are. Your father has shot your mother and the dog, and finally himself. You’ve decided you need to bring them back to life. You think you need these people.

Oíche Mhaith is a heavily scripted, top-down, 8-bit game, not dissimilar in tone or in style to Cavanagh’s creepy and poignant Hero’s Adventure. Aside from navigating the protagonist from room to room, this moment where Eimear decides to revive her family is the only one where input is asked of the player.

Eimear is as dead as her parents.

Eimear wishes to resurrect her family using some sort of computer program. You must match four personality types—each represented by a different shape—to her mother, father, Buttercup, and Babby. Getting the order wrong is compelling, because each mistake reveals something about this family’s true values. Eimear’s parents cannot possibly be configured as kind. That wouldn’t be who they are. Who are these people?

The answer is that Eimear’s family is a patriarchal one, aside from being a cold and abusive one. There is a reason why Eimear is kicked around like a dusty pebble: She was the undervalued of two children. The deceased son is more than just absent—and for that reason, Eimear’s family will always reject her. They ultimately choose death, a second time, over her. In doing so they abandon her to a life of eternal confusion, self-loathing, and anguish. That’s what they were trying to do when they killed themselves the first time.

Oíche Mhaith seems to set up a gender dynamic as a way to convey themes spanning the effects of child abuse, the power of death to implode a family, and the need for a child to be reassured by support and parental love. Yet while Eimear’s situation pertains to her gender and the specifics of her personal tragedy, the player develops a sense of empathy for her. You internalize the role of this child, and feel the yearning she has for her family’s affection, and the confusion and sadness of its denial. Maybe you could retry the game, to get them to choose to live this time. That would be nice, but it’s a delusion. Looking at Eimear is looking into the face of rejection, abandonment, neglect, and abuse. That she is simply portrayed as a young, damaged human being in need of love makes her diminished status in the family seem that much more tragic and absurd.

It might be tempting to ask why she doesn’t allow the incorrect personality configurations to remain as they are. She could have a happy dog, a loving mother, and a thankfully quiet father who doesn’t shush her when she tries to say things like “I love you.” Why must things be restored to exactly as they were? Why can’t things be made better?

There is a kind old man, a neighbor, who comes to the aid of the orphaned Eimear, providing a small glimmer of hope. But Eimear already wants the only thing her parents allowed her to understand. The bile she spews to Babby is already profoundly a part of her worldview. Eimear is as dead as her parents.