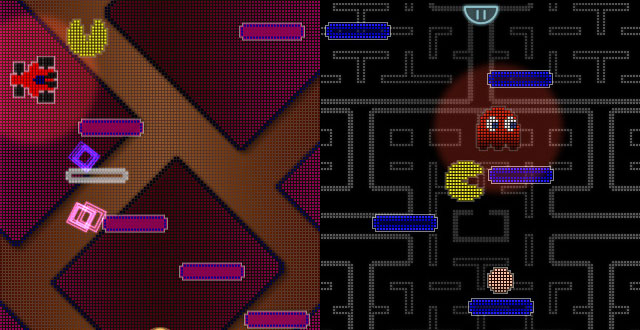 Pac-Man’s appearance is no longer something that causes us to stop and take notice. Namco has exploited his popularity in so many disjointed and unfortunate ways that we no longer have any real expectations for a Pac-Man game. He serves as a cautionary tale for other videogame characters: be careful what games you take part in. Even when Pac-Man manages a legendary comeback, like last year’s Pac-Man Championship Edition DX, the fanfare is minimal.

Pac’N-Jump is for those who have forgotten. For those who don’t play games, who don’t have an Xbox 360 or PlayStation 3, and for those who played Pac-Man when he was still relegated to the arcades, Pac ’N-Jump is lying in wait on their phones—for those willing to pay the two dollars to play it. Pac-Man, this is your big chance. Don’t blow it.

The game is essentially a Doodle Jump clone with some key modifications. The player tilts his phone in order to help Pac-Man climb ever higher by bouncing off of platforms and avoiding ghosts, who pace back and forth. When Pac-Man eats dots, he climbs higher. When he eats pellets, he is able to eat ghosts. When he finds fruit, he blasts skyward, often connecting with more fruit on the way up. This sensation—of rocketing skyward and collecting a chain of fruit, ghosts, and dots on the way—is immensely satisfying.

The game rewards your high scores by unlocking another level just as you’ve started to master the current one. Each new level thrusts Pac-Man into the world of one of Namco’s other classic games: Dig Dug, Rally X, and Galaga. Unlike that most-successful platform-jumping iPhone game, Doodle Jump, these alternate levels are not merely re-skins of the same gameplay. They are abstract representations of their respective games, utilizing the tools at Pac ’N-Jump‘s disposal. The Dig Dug level unleashes fire-breathing dragons. In the Rally X level Pac-Man must dodge cars that are perpetually driving across the screen. Galaga has him literally reaching for the stars as he dodges alien ships that swoop down and attack. Still, in a screen-climbing game, it’s all about the score. Beating finite “levels” seems oddly limiting in this genre—I vastly prefer the sensation that there is no limit to my flight. To track this progression through scoring provides a way to recognize success without limiting it. You can always move onto one of the other four levels, but you’re never prevented from getting even better on the current one.

I’m not impressed that Namco dreamed up the idea of a Pac-Man-branded Doodle Jump clone. It’s the sort of frustrating choice that makes you want to give up on Pac-Man altogether. I am impressed, though, that Namco managed to iterate on the genre in a way that justified the game’s existence.

When playing Pac’N-Jump for the first time, I immediately noticed that Pac-Man felt oddly heavy in comparison to the protagonists in other platform-jumping games. At first, this frustrated me. It was this weightiness, though, that made those few moments of uninhibited flight, spurred on by chains of fruit, so incredibly satisfying. Fighting against the inevitability of gravity, always on the cusp of blowing it, Pac-Man manages to find the fruit that saves him; then another and then another. Eventually he will fall, but for now I am savoring his flight.