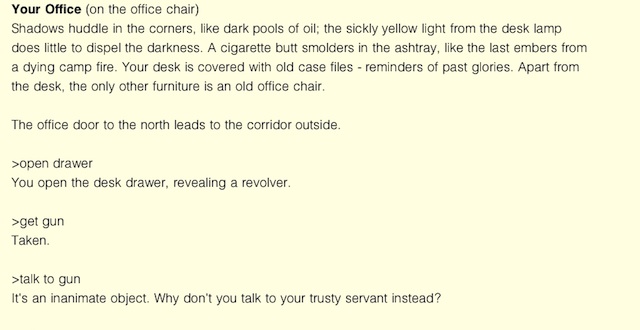 >look at graphics
That does not exist, or isn’t needed at the moment.

>look at story
At first glance, PataNoir seems par for the course. You are a private dick who is retained to locate a missing person. However, you have issues.

>examine issues
Your issues are of the mental sort. While not dangerous, you nonetheless should be taking heavy psychiatric drugs. You have difficulty discerning between what’s real and what’s not.

>examine sanity
You have a peculiar condition, in which you mistake metaphors and similes for the real thing. Your mind is falling apart like a creaky old house.

>enter old house
You open the door and go inside. Any time you come across a metaphor, you can treat it literally. This gives the illusion that you are breaking away from reality, lending PataNoir a metafictional quality. At one point, your client is withholding information from you. To get him to talk, you have to take advantage of the narrator’s fondness for labored metaphors. When he mentions that the client’s eyes look like two large lakes, that is your cue to take a swim in them. You dive to the bottom where a puzzle awaits. At times, PataNoir gives the sensation that you are falling down the rabbit hole.

>leave house
You leave the house. If only going in and out of dementia were as simple as that in real life. Once you know what to look for, solving meta-puzzles is no more confusing than any ordinary puzzle found in interactive fiction, which boils down to using item X on object Y.

>ask about confusion
Interactive fiction can be confusing. Playing requires that you know the syntax. You have to type in commands in a specific way. But the worst part can be the puzzles.

At times, PataNoir gives the sensation that you are falling down the rabbit hole.

>ask about puzzles
The puzzles can feel like looking for a needle in a haystack. A good technique for solving puzzles is to look at every object in a room. Look out the window. Look at the dresser. Look in the dresser. Look at the bed. Look at the lampshade. Occasionally, the game will throw you an incredibly arbitrary puzzle that won’t make much sense, even after you find out the answer. However, you have something in your inventory that can help.

>inventory
Your inventory is filled with one or two real items, and a great many “figurative” ones, including:
some oil you’ve collected from oily shadows
a snakeskin you got from killing a path that twisted like a snake
a white cocoon that was taken from a lamp that looked like a cocoon
a revolver

>look at revolver
This is no ordinary gun. It is also your partner, dubiously named Wesson. Yes, you have an imaginary friend. Far more than a cheap firearm that would fetch $50 at a pawnshop, he is the game’s built-in hint system. Whenever you are stuck, you can ask him what to do, and he’ll usually point you in the right direction. Though the idea was likely cribbed from Deadly Premonition, Wesson is infinitely more useful than Zach, that game’s make-believe sidekick who was best suited for discussing the finer points of B-movies. Too bad he’s not nearly as fun.

>ask about Wesson
Wesson calls you “sir.” He is usually concerned with the problem at hand.

>look at the problem at hand
PataNoir is one long string of puzzles—each leading into the next. This logic bleeds into the fiction, and it makes teetering on the edge of sanity seem like a well-practiced balancing act. You would think a crazy person—with a talking gun, no less—would have less logical delusions. Yet Wesson is overly rational, and seldom diverges into the bizarre ramblings that you think he would.

>examine being overly rational
While the clever use of metaphors opens up surreal pockets in the narrative, you begin to anticipate them. They become nothing more than a signpost pointing you to the next puzzle that needs to be solved. The fiction is kept on a tight leash.

>examine fiction
You would think an insane person—with a talking gun, no less—would be more interesting, but it is hard to remember anything about him. At least he is more personable than a text parser.

>examine text parser
A text parser takes sentences and compresses them into a logic that a PC can comprehend.

>examine text
The story is reduced in this way too—written as if to conform to an outdated system.