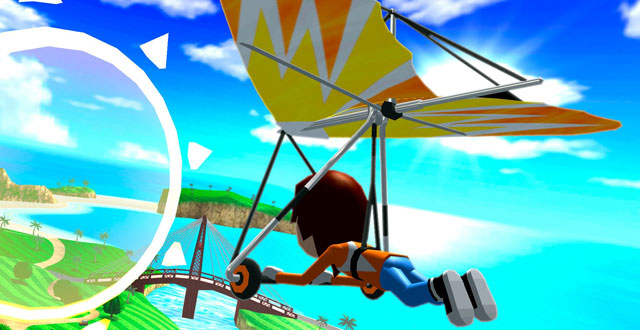 In the videogame biz, “demo” is a dirty word. Reviewers use it as shorthand for games that feel undercooked, undeveloped. But when did “demonstration” become synonymous with raw? All games are demonstrations of some sort. Risk shows us what the globe might look like if run by a stable of over-caffeinated power-mongers in jeans; American football is sanitized gladiator combat, where a quarterback sack is one region’s champion slaying the other (minus the decapitation). Even 1962’s Spacewar!, what many consider the ur-videogame, was approximating something else, larger and more impactful than what was possible on a glowing monitor.

Pilotwings Resort for the Nintendo 3DS is a demo. You fly a number of vehicles around a tropical island, completing goals and finding collectibles. Challenges might consist of shooting down balloons attached to moving vehicles, jet-packing across platforms floating above the island, or plunging your glider into the mouth of a volcano. After ten hours of playtime, I earned the final gold star and the credits rolled. But such progress was never the point.

In the real world, people demonstrate when they have something to prove. The original Pilotwings in 1991 gave Super Nintendo owners the unprecedented vision of a real-time rotational playfield. In 1996, that other launch title for the Nintendo 64 showed off beautiful polygonal landscapes and true analog control. But the experience remained grounded, confined to the flat screen. Play Pilotwings Resort for ten minutes and you’ll realize the limits of flying in two dimensions.

This is what the 3DS can do: make you nauseous. You are soaring above the island, about to plummet over a cliff’s edge toward the coursing sea below. There is a single moment when the ground falls away and the blue waves are crashing in the distance at the base of this island, their white crests barely visible. You have gone from Balloon-Held-By-Girl-At-Fair height to Dirigible-Stalking-a-Football-Stadium height in the span of a pop. And the sudden drop makes you suck in your breath and tighten muscles in your stomach you were, until just recently, unaware existed. Some might label this a detriment, a flaw in the system’s display. I say: Soaring hundreds of feet above the earth damn well better make you queasy. This is the first flying game that simulates not the pilot’s instrument panel, but his nervous system.

In-game options give you ample opportunity to test your resolve. You select one of two separate modes: Mission or Free Flight. After a successful mission, you have the choice to view a replay. This is a common feature of racing games, enabling the developers to show off their nifty command of canted angles for dramatic effect. But here it is your chance to absorb a moment, to appreciate the sheer, unthinkable geometry of floating. Toggle the music “off” and listen to the wind catch in your glider’s wings. Face the camera at your avatar-pilot and watch yourself slip through rocky archways, the narrow passage receding into the parallax distance. Pilotwings Resort is an experiment in controlled vertigo. Playing becomes meditation 100 feet above sea level.

The game is not without problems. Its single island is a borrowed asset from 2009’s Wii Sports Resort; I yearn for new locales to explore. In-flight you can nudge the camera in the four cardinal directions, approximating a crane of the neck; but you do so with the d-pad, located below the new analog pad. The awkward thumb work often tilts the system out of the 3D sweet spot: a shame, since the feeling of depth makes flying through an orchard of trees an event to savor.

Soaring hundreds of feet above the earth damn well better make you queasy. This is the first flying game that simulates not the pilot’s instrument panel, but his nervous system.

This is the beauty of a game-cum-demo: It provides opportunity for wonder. You’ve never flown around an environment in autostereoscopic 3D before. In other games, if I’ve botched the level I’ll restart immediately. In this newest iteration of Pilotwings, there are greater rewards than dangled carrots. Missed popping that balloon? Oh well—swerve left, head toward the suspension bridge, and see if you can fly between the coiled wire. Or fly straight up for three minutes, then level out and look below you at the island now a tiny speck on—or rather, in—your screen.

There have been opportunities for sandbox flight since the first computer simulators, but the addition of 3D makes simple movement feel new again. Flying in Pilotwings Resort creates the same rush that running and jumping did in Super Mario 64 back in 1996, when completing basic tasks set the adrenal juices pumping in a way normally reserved for aerobatics amateurs trying their first Cuban Eight. Does the added depth affect gameplay? Do 3D visuals change, for the better, the sensation of digital flight? You bet your sweet tush it does.

My girlfriend’s father is a pilot. He’s been flying since he was 14 years old, eventually working as a crop duster in western Pennsylvania. He no longer flies, but he remembers the feeling of taking the skies solo for the first time. “It wasn’t anything earth-shattering,” he told me over the phone. “We’d trained, [so] we knew what was coming up … it was a little bit anti-climatic.”

Will logging enough hours in Pilotwings Resort earn you such steely calm in the face of lift-off? Well, no. But at least you’ll recognize that slight, sickly pinch deep down in your gut.