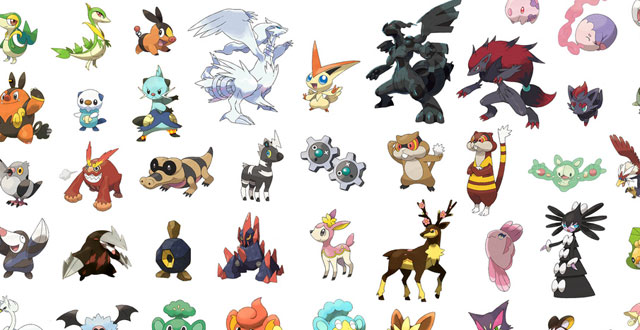 I remember the day Chris Pereira brought the copy of Nintendo Power to the playground. He showed me an enthusiastic preview for a cute role-playing game about collecting monsters and pitting them against each other. It was for the Game Boy, and it was called Pokémon.

Neither of us even knew what a Pokémon was, but Chris skillfully sold me on the game before dropping the hammer that to catch ’em all, you had to play both games: He wanted to ensure that his investment wasn’t going to be a waste. But a year later, when everybody on the playground was swapping Pokémon at recess, or playing Pokémon cards, I’d be thoroughly done with the series. I thought I’d grown up.

To be frank, I didn’t think Pokémon Black and White was aimed at me—but, I realized, it is aimed at people exactly like me. These days Nintendo is in the nostalgia business.

Pokémon has made concessions to fresh ideas. There are 150 new Pokémon, new types of battles, better animations, and a whole new setting. But you are still just walking around, attacking and catching other Pokémon. (But really, is that so bad? Have we forgotten how Pokémon turned the random battle, the most annoying component of role-playing games, into a source of potential joy at discovering a new Pokémon? And why tempt fate by altering the genius of that moment when you capture a Pokémon? Almost every other animation can be skipped during a battle, except for that moment that comes after throwing a Pokéball and watching, tensely, thinking, Have I weakened the Pokémon enough to capture it? as the ball rocks back and forth once … twice … three times. It’s a bit of suspense that never gets old. Neither does the joy that comes when the final lock clamps down.)

As a card-carrying member of the games-are-art brigade, who’s willing to verbally box anybody who dismisses games as playthings, I have a tinge of shame at playing something that’s meant to comfort instead of confront.

The game’s most radical innovation is the C-Gear, which turns the bottom screen of the DS into an online portal. It’s a crucial change—the ability to trade with other players via wireless or infrared—though simply an extension of the core idea of trading monsters and battling with others, which was at best an ordeal with 1998’s technology. Occasionally, on my commute to work, the game will tell me that somebody nearby is playing. With a few presses of a button, I can find out where in the game world the other player is. If they are ahead of me, I wonder what it’s like there: what Pokémon they’ve encountered, what wonders they’ve seen, what hard won battles it took to get there. If they’re behind me, I experience nostalgia: Oh, I remember that gym. Good luck!

Why do I always feel guilty playing Pokémon? Why do I always dismiss it in conversation when, really, I enjoy it more than most games I’m playing? Is it because I feel ashamed of playing a game that is most like a fairy tale? Pokémon traffics in playfulness and naked anticipation. It may remind me of being a child, but it feels really close to feeling childish. As a card-carrying member of the games-are-art brigade, who’s willing to verbally box anybody who dismisses games as playthings, I have a tinge of shame at playing something that’s meant to comfort instead of confront.

Pokémon Black and White‘s primary fault is that it does try to confront. Instead of the simplicity of the young child finding their way to happiness, there’s a story about Pokémon rights. At first, I was impressed, expecting a deconstruction of the relationship between the main character and his or her Pokémon. The game, however, quickly showed that it wasn’t interested in a fable on animal rights. The activists were quickly revealed as villains with straw-man arguments and sinister agendas instead of ideals. The game doesn’t really want to tackle these issues, despite bringing them up. It’s a small blemish—who’s playing Pokémon for the plot, anyway?—but it stains the whimsical nature of the game.

Role-playing games are about the illusion of power. The more battles fought, the stronger you get. Here, while your Pokémon grow and (sometimes physically) evolve, you never do. There’s a scene in this game where you enter the big city, so big that you get a bit lost. It is a far cry from the little hamlet you started in. The Pokémon games pay lip service to the idea that we travel into the world and grow up, but the world of Pokémon is static. It is meant to be more than a gateway to the past; it is meant to be timeless, and in that it succeeds wonderfully. As far as you go from your little town, you can always go back home; and no matter how much the new Pokémon changes, it still feels like going home.