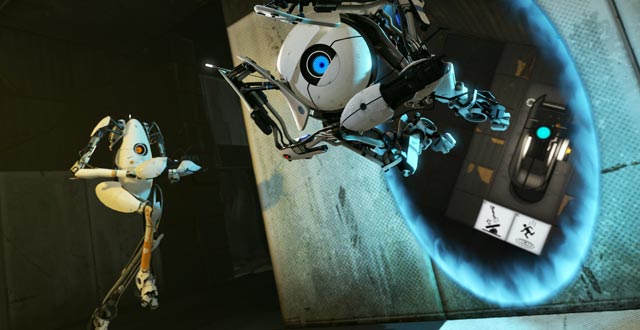 There was a point when I realized Portal 2 was no mere sequel. I had been thoroughly enjoying the game alone when I decided to give the cooperative mode a shot. Somewhere in between coaxing my editor Ryan Kuo onto a platform, only to drop him into a pool of water below and kill him—a favor he returned at the earliest convenience—and leading my girlfriend around the sterile, albeit asunder, laboratories of Aperture Science, I was convinced. Portal 2 does all the things that sequels do, but unlike ordinary sequels, the emphasis in Portal 2 isn’t on Portal, but the “2.”

Portal 2 is still Portal, the sleeper hit that began life as an extra in The Orange Box. It’s still a game about using portals, pairs of doors that connect distant places, to navigate through a level. There is simply more Portal than ever. The campaign is longer. Robotic voices make even more slightly amusing quips. The puzzles, best described as Being John Malkovich with guns, have plenty of new metaphysical twists. But Portal 2 isn’t distinctly bigger, harder, or more extreme. All game sequels do that. What makes Portal 2 worth playing is how two-player co-op alters and enhances the genetics of the game.

At one point, I was bouncing through portals on a series of catapults, being launched around the room while my girlfriend attempted to lob a block to me in midair. Another time, we stood side-by-side and dove several stories down into our respective portals, which spat us into the air, one behind the other, to perform similar acrobatics. It was tough, but having our Pixar-esque robot avatars dance together when we finally pulled off these seemingly impossible feats was well worth the effort.

The Portal mythos is quite literal about the motivations for the actions you perform. Chell, the game’s heroine, and the two robotic avatars used in co-op mode, are being forced to complete a series of scientific tests administered by a rogue AI. While the characters may be at the mercy of a malfunctioning computer, the player can walk away at any time. What keeps us playing is the satisfaction of piecing together the perfect solution, like a lab rat scurrying through the many branches of thought to find the cheese at the end of a maze. The feeling is intensified when two players solve a puzzle together. They race through each others’ minds. There’s a greater chance that they will get lost. But the feeling of joy that comes from syncing up with a partner to place a gray-toned block on a red switch is unparalleled.

Had Valve been content with making Portal 2 a bigger and better version of Portal, the game would have been just fine—excellent, even. Yet, co-op play elevates a thoughtful, well-made game into a collection of thoughts shared between two people: sitting on the couch and planning out how to solve a particularly vexing puzzle; operating a series of gates while a colleague navigates through them; performing incredible synchronous aerial moves; and glancing through each others’ split-screen windows.

It’s in these moments that Portal 2 is more than a clever game about jumping through holes and pushing around blocks. It becomes a portal that connects two minds, which both players must move in and out of.