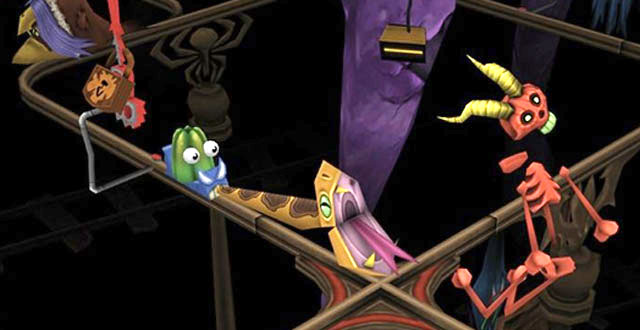 Whenever I hear the name Margo, I imagine a chubby girl with braces. It’s a peculiar cruelty of the universe that names, an identifier almost always chosen by the one not being identified, ascribe so much power to their antecedent. In theory, they mean nothing: an arbitrary collection of graphemes pronounced in a certain way. That wooden thing with leaves on top could be called anything—salamander, saccharine, shopping cart—but it was named Tree, so that is what it is.

In the gaming world, a litany of titles are launched or announced every week, and the first piece of information transmitted to potential players is often a name. Browse the App Store and a title’s importance becomes clear. In the world of mobile downloads, where dozens if not hundreds of new applications arrive daily, one game’s release is like the brokenhearted mourning in a kayak: to the ocean, your tears are just more salt water. Names differentiate a single object from its surrounding environment. The impact of a game’s name is almost as essential as the actual content.

So when I heard of a new iOS title called The Great Jitters: Pudding Panic, by German developer kunst-stoff, I knew I had to have it, sight unseen. I could be slinging handfuls of chocolatey sludge at diabetic zombies in some deranged version of Burger Time; I might be mixing ingredients in a bowl and plating desserts in a resource management game like Diner Dash. It didn’t matter. Then, the coup de grâce: I learned you play as a jiggling mold of gelatin on an out-of-control ghost-train. (No pudding, you ask? Wackelpudding, in Germany, is the name of a gelatin dessert, often lime, shaped like a bundt cake.) Your task: lay down track pieces and use power-ups to escape a ride haunted by skeletons, witches, and other creepy crawlies. The icon alone, of a green mold with googly eyes, would be worth my 99 cents.

(Of course, sometimes a nice sneeze is worth 99 cents. This is my problem with this generation’s race-to-the-bottom pricing model: the risk is so little, you feel less compelled to get your money’s worth. Because you’re predisposed to expect a dollar of content, your notion of value contorts into unreliable shapes. But this is a discussion for another venue.)

Pudding Panic is more than just a neat alliterative mashup of food and carnival rides. There is a game in here, too, an isometric action-puzzler with roots in Mark Cerny’s classic Marble Madness. The graphical design takes notes from mid-’90s Rare games, where anything became a character by sticking a pair of eyes on it, but also from the surreal illustration of Mark Kazaleh on Ren & Stimpy and Harry Moore’s work on Spongebob Squarepants, with a pinch of Edvard Munch. Each level begins with a sketch drawing and a clue, hinting at the coming track layout and possible solutions. When the level loads, the camera immediately hovers to important spots on the track, careening and pausing at gaps or levers. Soon your jiggling mold is sent cruising down an elevated track; it’s your job to survey the obstacle course of monsters and get to the other side, where a large demon mouth opens and swallows you up.

Ghost-train rides succeed because you have no control. They are an authored experience, on rails and without choice.

The main play mechanic involves tapping and dragging one of three track pieces onto an intersection to change your train’s path. You also accrue coins lying on the track, allowing you to use certain powers. Noisemakers, complete with attached snake-head, knock off troublesome monsters. Wearing a paper bag with a scary face on it sends most enemies scurrying in fright the other way. Meanwhile, grim reapers drop from the ceiling in typical haunted-train fashion, spooking you to distraction and perhaps to missing that turn. Wooden signs spring up with warnings or tongue-in-cheek requests: “Bring more friends!” The entire production is fun, polished, quirky and challenging.

Why, then, do I feel compelled to say I didn’t enjoy it half as much as I’d hoped?

Ghost-train rides succeed because you have no control. They are an authored experience, on rails and without choice. Pudding Panic ultimately fails because in order to progress you need to decide how best to get from one side to the other. Without this player interaction, of course, there would be no game. But the mechanical task of designing this ride yourself—touch, drag, drop—impedes the fluid and unexpected nature of traveling these spooky rails. That clash in expectation—between the vision in my head borne from a name’s inherent charms, and what reality offers—dooms the game as an imperfect echo of a personalized, impossible ideal.

In an interview with DIY Gamer, Patrick Rau, founder and creative director of kunst-stoff, examines the wordplay of his company’s name. The word “’kunst’ means art, ‘stoff’ means something like material. But ‘kunststoff’ means plastic, which is something artificial.”

Sometimes a name gets it just right. As a piece of material art, Pudding Panic is lovely and worth digesting. As an interactive experience, the game feels a tad artificial.