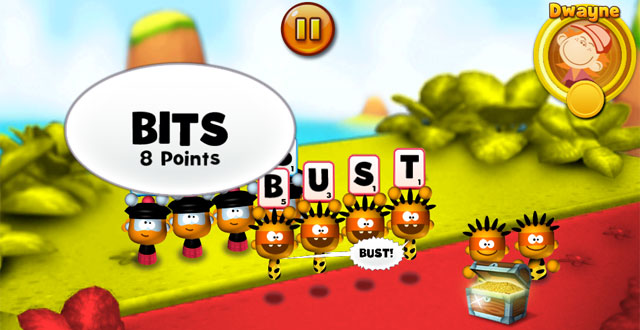 Games like Risk and WarLight may technically be strategy games, but they’re based on the premise that the stronger overwhelm the weak. Even though players may be locked in a battle of wits, the individual battles come down to a simple question of who is stronger and, in some cases, luckier. This rift between game mechanic and loose narrative theme is something we’ve grown used to over the years. Even the art of war itself contains this inherent contradiction: one cannot win without strategic prowess, but in order to carry out such prowess one must also possess a measure of strength. After that, it’s all up to fate.

The greater context of every Quarrel battle is a Risk-style free-for-all, wherein each competitor attempts to take over every plot of land available. Divide-and-conquer is still a part of the overall package, but you’ll be spending most of your time in individual word-battles with another party. Quarrel puts fate in our hands by making our weapon set a selection of letters. Damage is done by spelling out words with those letters. Length is good, but more important is the worth (rarity) of the letters used.

Both players are presented with the same eight letters, the only difference being the number of soldiers, and thus usable letters, each player entered the battle with. In Risk, having fewer soldiers—and dice—means fate is less likely to be on your side. Quarrel cuts the dice out of the equation, meaning you must be smarter than your opponent to make up for a deficiency—by spelling a higher-scoring word with fewer available letters. It’s not likely, but it’s possible. And if you don’t pull off the upset, you only have yourself to blame.

Once the inevitable multiplayer update arrives, this game will serve as a hopeful portrayal of a world where battles are fought with words and cleverness.

The game avoids almost any semblance of war. The settings of the various game-boards are colorful; the opponents are friendly and simple personalities representing several nationalities and age groups; and every action is accompanied by brassy fanfare. Your soldiers gleefully bob their heads along with the game soundtrack; they seem excited, not hesitant to go to war. When they lose their battle, they must endure an onslaught of giant letters, but soon after become angels and float up to heaven. In the vein of Mario Party, you get a sense that you’re playing a game in which the characters are playing a game themselves. Even they aren’t taking this seriously. This isn’t war; it’s wordplay.

Quarrel has the potential to become a fluid, dynamic battle of wits and vocabulary filled with upsets and victories that wax and wane based on our varied knowledge of the English dictionary. Unfortunately, you can only play this ingenious game against the computer—forcing you to somehow convince yourself that you’re playing against characters with their own dynamic knowledge sets, and not computer-controlled enemies masquerading as people. This fact is uncomfortably obvious when the smarter ones seem to beat you at the game relentlessly, never making oversights or suffering from blind spots. Of course the computer will have a better vocabulary then me, and will be better at finding words in a pool of letters. After all, isn’t that the same thing people use to cheat at Words With Friends?

It’s hard to shake the feeling that your loss in Quarrel is somehow representative of the entire human race’s failure to keep up with its creation; and losing becomes an increasingly bitter affair the more it happens. Once the inevitable multiplayer update arrives, this game will serve as a hopeful portrayal of a world where battles are fought with words and cleverness. In the meantime, it’s a dystopian affair, wherein the computers we can beat are patronizing us and the ones we can’t have no interest in backing down, even if it means we’ll enjoy ourselves more.