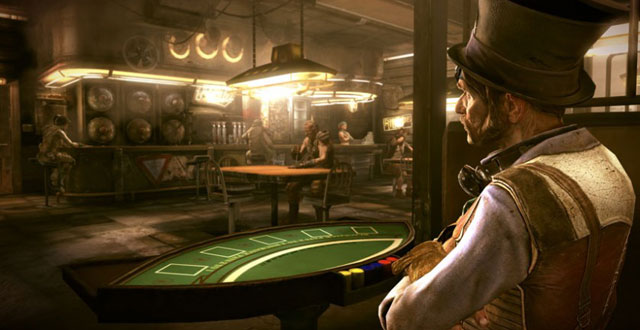 When I first started playing Rage, something felt missing. The story felt shallow, meaningless—a lesser copy of previous apocalyptic games, every task was a simple fetch quest populated with evil mutants to shoot and kill on the way. Meanwhile, I ached for some sort of player progression. It had been nearly two hours and I had yet to hear any Pavlovian bells or see anything notifying me that I had leveled up. The question that kept popping into my mind: What’s the point?

That is the question we’ve been asking ourselves since the invention of play itself. If no one is gleaning an obvious benefit from this, isn’t it a waste of time? Shouldn’t we abandon these activities for those with direct relevance to our current cultural needs? Maybe we should spend our time enhancing our intellect, learning team-building skills, or having empathy for those less fortunate than us.

In other words: Do we need a game that offers us only the chance to shoot dudes? Wouldn’t we be better off building relationships with our friends in Left 4 Dead or becoming smarter by playing SpaceChem?

Rage‘s setting places it in direct competition with two first-person juggernauts: Fallout 3 and Borderlands. On its face, Rage borrows quite a bit from those two games. As in Borderlands, cars are used to drive across vast distances in the wasteland. As in Fallout 3, the primary enemies are mutants. The game takes place in a giant post-apocalyptic wasteland. As a result, Rage can feel like an alternate-reality version of the other two.

But this ignores the profound impact that an entirely different design philosophy can lend to a game. The plot and characters seem cribbed, but Rage doesn’t value plot and characters. The center of its universe isn’t the setting, any non-player character, or even you. It’s your gun.

It’s an entirely different reality we’re dealing with. id Software has abandoned some of the most taken-for-granted videogame innovations from recent years. Without rewarding every kill with experience points and leveling up, they have made the wasteland their own—placing focus on the things that matter to those looking for a carefree way to unleash their pent-up frustrations: player skill and guns. Instead of collecting random items and new skills, you learn to use your items more skillfully. You master an unambiguous system.

The wingstick, for instance, is the quintessential stealth weapon—a low-cost way to decapitate an enemy from a distance without causing a sound. However, you quickly learn that the wingstick lacks a really good ability to find its way back to the player, as it ought. As a result, it bounds across the room, into corners, and onto the floor. If there are multiple enemies in a room, you can count on being found out by friends of the now-headless and deceased. It quickly becomes obvious that wingsticks ought to be treated as a means of making your presence known. As the wingstick soars through the air, a quick switch to shotgun, a thrown grenade, or maybe an assault rifle finds its place.

What if the kind of rest we need most is from self-examination and awareness?

This is the focus of Rage, a focus that harks back to id Software’s Doom. In that game, the protagonist was the weapon in your hand. Switching from pistol to shotgun to chainsaw to BFG were events in themselves. There were no self-important set pieces—just opportunities to inflict your own chaos onto the environment. Rage is defined by weapons. Climaxes in this game aren’t narrative; they are shooting galleries.

The story encountered along your journey is secondary, and that’s by design. Characters admit to being unhelpful, and allude to the barrenness of the setting. A quest is offered up with little explanation except that it must be done. Rage knows full well that it is meant not to be read, pondered, or explored, but played. Its simple, thematic sandboxes provide opportunities rather than limitations: take revenge, get out alive, survive the onslaught, save our town.

Rage’s own dismissal of its narrative aspect is such a crucial guiding principle that walking around town and asking people for your marching orders can become tiresome. After a while, I started to skip talking to get straight into the action. I found myself overcome with stereotypical misanthropic rage. Shut up, get out of my way, and just let me shoot dudes!

Rage provides a unique opportunity for the modern player to dive headfirst into first-person combat for the sake of it. There’s no need to justify or to ponder. We play these games all of the time, explaining the activity with digressions about how it leads us to consider this truth and feel that emotion. But what if the kind of rest we need most is from self-examination and awareness? Maybe simply playing is worth the time.