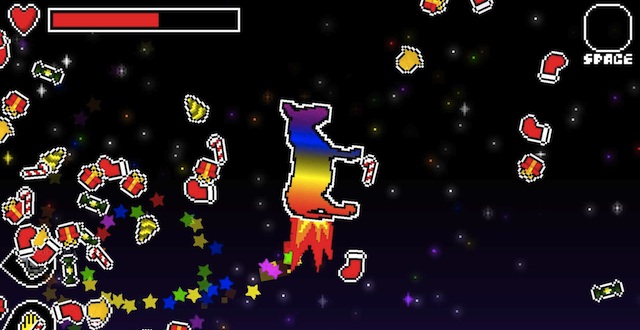 A game of Niall Moody’s freely downloadable Rainbow Space Donkey Escape takes about five minutes to play, but will have the gears inside your brain turning for days. Normally I welcome any game that leaves room for reflection, but this Newtonian-physics-based oddball of a shooter mostly has me wondering what the hell I’ve just been replaying for the last half-hour.

Well, I use the term “shooter” loosely here. The ostensibly Christmas-themed game involves a rainbow-colored, donkey-shaped cutout who has separated from its herd and is now lost in the vacuum of space. The game, however, is as much a shooter as it is a Christmas game: to make finding your rainbow space donkey herd more difficult, evil Santa Clauses of various sizes (“Santers”) appear along your path as you play with your momentum. But here’s your secret weapon: the rocket-like combustion that shoots out of your backside. Yes, you have a boost that allows you to explode nearby Santers while you power forward. And yes, it fires straight out of your ass. Figuring out how to turn in a gravity-free environment allows you to give those pesky Santas a taste of your incensed behind.

Santas explode in harmless fireworks of presents and Christmas cheer against a black backdrop pointed with white 8-bit stars. For a few minutes, it’s kind of beautiful, and you want to find more Santas to blow up just because you can. Meanwhile, you find health-replenishing food, as well as weapons and items, which you attract as though rainbow donkeys have a planetary pull. The Emperor Santa is no match for me, now that I have this shield. But oh, is that…? It is!

I pick up the wrecking ball, which swings from my donkey’s body like a ceiling fan. It’s powerful but dangerous, capable of pushing me off my forward path and pulling me into an infinite loop, continuously turning on one point. I need a Santa to bump me out of my circular inertia. I may need to take a hit for it.

This is not a game made for long stretches.

But I’m tired of this now. I just want to find the compass that points my way to the herd. Without that, or the homing pigeon, navigating the theoretical infinity of virtual outer space is, well, somewhat exasperating. I just want to go home. I just want the lights to turn off and the music to stop.

Like so much holiday feasting, the seemingly Jeff Minter-inspired Rainbow Space Donkey Escape can only be consumed in small indulgences. The tinny, repetitive chiptune music, the internet-meme-based writing, the absurdity of the premise—and good god, the vibrant color scheme—is migraine-inducing when it isn’t delicious. This is not a game made for long stretches. It’s the Christmas tree that needs to be dismantled, the icicle-shaped lights that need to be turned off, the annoying remixed carols that need to disappear from retailer soundtracks, only to return next winter.

Once in a while, for five minutes, it’s fun to float in a carefree reverie. But gravity must pull us down to Earth. Those dishes aren’t going to clean themselves.