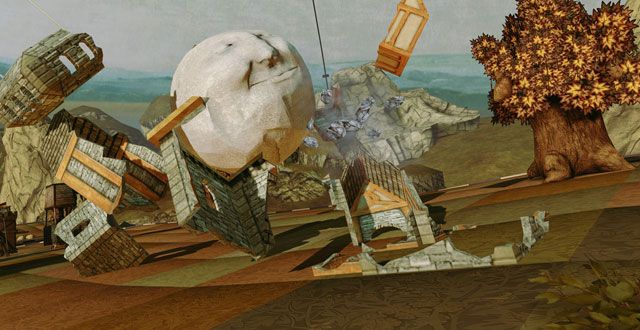 I flung King Leonidas off a cliff at the Battle of Thermopylae. I brought down Vlad Tepes in Wallachia with a herd of well-trained cows. I flattened the zombie Plato and Aristotle, his undead cohort. And I completely bowled over Marie Antoinette.

Revel and be awed by my glorious exploits.

This is Rock of Ages, a genre-bending downloadable title in which I must roll a giant boulder down a winding, treacherous path, gaining enough momentum to thwack into my enemy’s gate. To make things a little more interesting, I must accomplish this before my opponent rolls his or her boulder into mine—naturally, the course is peppered with defensive units that we must both avoid. Ballistas, bombs, airships, mammoths—these I must purchase and place on the enemy course cleverly before the start of each round. Likewise, computer enemy units generate seemingly at random onto my own course.

Beyond the most mechanical of explanations and Super Monkey Ball comparisons, this game is hard to pin down. Rock of Ages is an irreverent mottle of art styles, game genres, and historical-cultural backdrops. Ace Team’s tower-defense-strategy-action-physics-racing game, though short (the Story Mode is a mere 23 levels), is essentially a clown car of cultural pastiche.

In a way, Rock of Ages is about everything. And because of that, it’s really about nothing.

The game is a loose—if not completely fractured—retelling of the Sisyphean myth, stylized with a heavy dose of Terry Gilliam-esque animation and humor. The story begins with me, a black-and-gold Greek pottery painting of Sisyphus, rolling that nefarious rock up a hill over and over while the god Cronus, otherwise known as Saturn, goads me on…

In being about nothing in particular, Rock of Ages accomplishes the somewhat nihilist, post-structuralist, post-modernist task of so much contemporary art: it actually makes us feel less empowered, less sublime.

…until I jump the Hell out of Hades—and straight through the space-time continuum. From this point forward, Rock of Ages becomes a tongue-in-cheek exploration of five art styles: Ancient Greek, Byzantine, Renaissance, Rococo, and Romanticism (represented stylistically through Goya’s “Black Paintings”).

I travel a patchwork of a map, which intersects chronology and geography in such a way as only a videogame creator—or master surrealist—can sew together. Each “art style” pertains to two or more maps, every one pitting Sisyphus and his troll-faced boulder against an often-infamous historical figure of the period.

In the Sparta map, I relive 300, both the legend and the film. The cut scene leading to the Porto map hilariously combines Charles III’s affinity for hunting with Doom, id Software’s famous 1993 first-person shooter. The embellished Dijon map pits me against a goofy depiction of Rubens’ Bacchus.

In each case, I steer my boulder down a perilous path into their gate, gaining enough momentum to smack it with an adequate level of force—portrayed by a damage meter. Generally, I can shatter the gate in three rounds, avoiding traps laid for me throughout the map. The game affords me an eclectic variety of units and boulder types, allowing for interesting defensive and offensive play.

But after repeated rolls down increasingly complex—yet principally the same—terrain, balance issues within this hodgepodge of racing, physics, tower-defense, and action mechanics begin to stand out. Cheaper units may, theoretically, offer creative placement ideas, but—despite the existence of mining units—my chances of building something worthwhile will likely be dashed by, among other things, lack of funds. I’m better off sticking some high-level projectiles and towers, mammoths (who will butt and roll my opponent’s boulder off the edge of the map), and bombs on the right spots. From a defensive point of view, this is the basic recipe for success in Rock of Ages. What matters much more is that I maintain the sharpest boulder-rolling skills.

In fact, despite the humor,  attention to visual detail, and tactical cleverness of many of the units, I found that the easiest route to success rested in simply knowing and navigating the map. I can choose to spend my money on a boulder with some special ability—fire, spikes, wings. But these aren’t necessary as long as you have opposable thumbs and depth perception. With a simple jerk out of the way, my enemy’s units are often very easy to avoid. At this point all I need to do is find the fastest shortcut on the map, gain enough momentum at just the right time, aim, and fire—and then repeat the process once or twice without losing my lead.

Of course I must also collect Golden Keys, three in each map. But most are easy to attain—and few are needed to progress to the game’s end. This seems like a half-hearted attempt to combine achievement with in-game progression. The few keys which are difficult to attain are certainly frustrating, but superfluous. They serve only to reassure my gamer’s ego. And that’s that.

Suddenly, I think I understand. Rock of Ages is not only mechanically, thematically, and aesthetically consistent, but seemingly self-aware.

By far the most interesting map is Florence, in which I face Leonardo Da Vinci during the Renaissance. Somewhere in the middle of the story, Sisyphus enters a semi-circular room covered wall-to-wall with a tiled backdrop of the Mona Lisa. I approach an enthroned, villainously posed Da Vinci—“the architect”— who graciously explains to me that yes, my avatar’s existence is a lie. That Sisyphus only exists in an artificial, computer-generated matrix, battling enemy after enemy for the sole purpose of my entertainment. He only exists in a “videogame,” Da Vinci explains, insofar as I want him to.

It could not have happened more aptly: videogames, Western art, and The Matrix finally clash in an instant to scare us with the reminder that our individual lives are probably not as inherently meaningful as our eons of artistic exaltation suggest them to be. The pith, the majesty of the game’s subject matter, is immediately undermined by Da Vinci’s breaking of the fourth wall. Sisyphus is no longer embroiled in an epic struggle: he is performing inanities for my amusement. And somehow, this is disempowering to me as a player. There’s a kind of absurdity to human hubris, to an overestimation of the nobility of our actions. Greek mythology taught these lessons well. So, perhaps, can videogames.

Don’t revel or be awed by my exploits, because I haven’t really accomplished anything.

But it is not necessarily a bad thing that Rock of Ages is about “nothing.” This is one of the reasons Seinfeld is so beloved. In being about nothing in particular, Rock of Ages accomplishes the somewhat nihilist, post-structuralist, post-modernist task of so much contemporary art: it actually makes us feel less empowered, less sublime. Perhaps we are not masters of our domain. Perhaps our endless routines, serial dating, and lunch with the same four friends every damn day are symptomatic of some need to find for ourselves the easiest, most mindless, most comfortable path. But it’s meaningless, perhaps ignoble. We don’t really improve; we just sort of go through the motions of daily life. And it’s a farce.

How would this game treat the modern era?

Rock of Ages parallels the chaos, absurdity, and malaise of modern times; of having so much information, genre, variety, and so-called agency thrown at you—without a clue on how to navigate that sea of noise. This game—consciously or not—flips the idea of the immersive “videogame” on its head, forcing you to be aware of the mechanics, the artificiality of it all. Where do we find meaning in a world so noisy, so constructed, so fake? It seems a Sisyphean task.

I finally face Saturn, depicted as Goya’s famous Saturn Devouring His Son. This final boss is like the others—simple, yet briefly amusing. I roll up a spiralling bridge, meeting checkpoints along the way, until I can smack Saturn in his ferociously ugly mug. Saturn is the Roman moniker for Cronus, the Titan god of the sky and time. Time is trying to devour me, make me another afterthought in the cavernous annals of history. Jason Rohrer’s game Passage illustrated beautifully what happens to the blur of one’s memory. Imagine now the blurry memory of an entire culture, saddled constantly with new things to forget. Time makes terrible things acceptably funny because it strips them of their resonance. That’s why we can mock the French Revolution without thinking too hard about the massive economic gap that inspired it. That’s why the events depicted in Rock of Ages don’t offend, but make us laugh.

A part of me wishes that the game could have gone further than Romanticism—that it could have been extended to the 20th century—and not just because I become giddy at the thought of building spaceship and heat-seeking missile units. As it is, Rock of Ages feels truncated, unsatisfying. How would this game treat the modern era? Abstract art? Futurism? Dadaism?

How would we be depicted? Would we find it so funny?