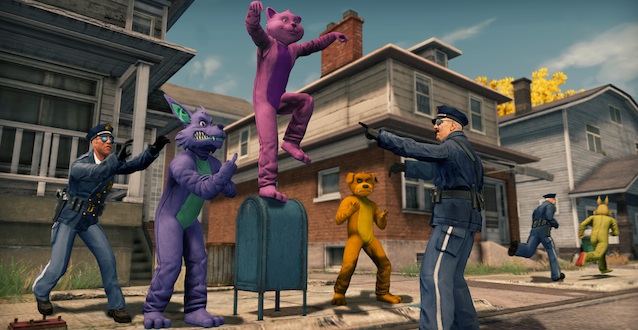 You take a breath. You were just free-falling at terminal velocity and have managed to catch your parachute-less friend. Then you see it, heading toward you. Your mission changes: you now have to take down a plane that is trying to ram you. Before she can get a disapproving word out, you let go of your friend and aim for the plane headfirst, shoot the cockpit window, and dive through the plane out the back (grabbing another parachute along the way), all the while ensuring the plane crashes. You then regroup with your friend with time to spare. This moment is played as a joke. We know that we’re not supposed to think of this as a James Bond-level moment of finesse, but rather as a surrender to Saints Row: The Third‘s absurd logic: This is a plan that shouldn’t work, but will.

Grand Theft Auto couldn’t pull this off. It has tried, in the past, to trade in its self-serious dramatics for something out of left field. The young kid from the ‘hood, who struggles to survive in the world despite systemic corruption and gang warfare, tries to clear his brother’s name. But this, at one point, involves donning a jetpack-stolen from a top-secret military base in an earlier mission-and trying to liberate possibly alien cargo from a military-guarded train.

The lineage from Grand Theft Auto is clear—they both provide open worlds to drive and shoot in, the justification loosely tied into the idea that you’re a criminal. Saints Row: The Third has no allusions, no dramatic center to give it a false sense of gravity. The jetpack mission would fit perfectly into the Saints Row universe. So does one involving a zombie infestation in the industrial part of Steelport (partially caused by you in the previous mission), and an extended boss fight with a demon in a Tron-like virtual-reality simulation.

Saints Row: The Third works and it works well when it’s entertaining these possibilities. It takes the idea of its open city and asks, on a lark, what it’d be like to, even for just a mission, indulge in the idea of zombies. It’s a kitchen-sink approach, one that the developer Volition takes seriously. In the city there are roughly a dozen different “activities.” Insurance fraud, for example. Or buying property. There’s a mini-game that involves streaking. Any idea is entertained, if only briefly.

In a lot of ways Saints Row: The Third reminds me on the classic Al Lowe games, like Leisure Suit Larry, or something by Ron Gilbert, creator of Monkey Island. In those adventures everything’s fair game. No gag passed up, no joke left behind. The characters in this game rob the bank wearing masks of themselves. The character creator has a sex-appeal option that, depending on gender, increases bust or bulge size. A character carries a microphone with him to speak in Auto-Tune at all times. The game starts with a Star Wars text crawl, with a dash of Strauss’ “Thus Spoke Zarathustra” used in 2001: A Space Odyssey, to give it a (purposely overblown) sense of importance.

Isn’t this mostly Grand Theft Auto: San Andreas with everything palette-swapped to purple?

For all this absurdity, why do I spend a bulk of the game hearing tired, casual sexism? (Do I really have to explain why a mini-game about prostitution is just not going to be cool with me? And if I had the employment rates in front of me, I’d guess 90 percent of Steelport’s female workforce are strippers.) Why do most of the missions involve myself shooting a room full of enemies, going to a checkpoint, shooting more enemies, and occasionally driving somewhere? No matter how self-aware (“When’s the ‘copter coming?” “In about two more waves of SWAT guys.”), the game asks players to repeat the same set of actions. It tries cloaking them. It upscales the amount of action, but not the variety. Taking down one fighter jet can be interesting. Taking down five, a few missions later, isn’t. Even the last mission, which involves all hell breaking loose, doesn’t ask the player to do much other than kill scores of enemies. It starts to feel repetitive and redundant in those moments.

Saints Row can’t afford to be conventional. Haven’t there already been better responses to Grand Theft Auto? Wasn’t the anal attention to detail and linearity in Mafia or L.A. Noire the perfect solution to GTA‘s tonal dissonance? Wasn’t Grand Theft Auto: Vice City already a pitch-perfect portrait of excess using the ’80s as a takeoff point? Wasn’t Just Cause 2 a much better take on an overblown open world with destruction as its main goal? Heck, isn’t this mostly Grand Theft Auto: San Andreas with everything palette-swapped to purple? At its best Saints Row: The Third is funny and does go where these other series don’t go-but most of it feels redundant, something an open-world game can’t afford to be.