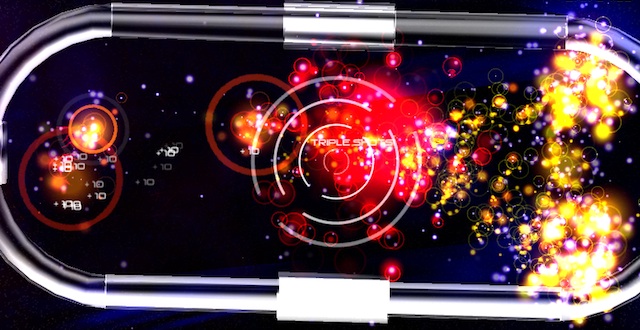 Few games can dazzle like shooters. Modern shooters have given up on the notion of fighting for humanity somewhere out in space or on judgment day, and instead have started looking inward. They have become sleek visualizations of the code running beneath them, expressing algorithms as stunning minimalist design. Scoregasm follows the pattern of modern shooters like Geometry Wars, Space Invaders: Infinity Gene, and the shooters of Radiangames and Kenta Cho. It is as much a treat to look at as it is to play.

Scoregasm is a twin-stick shooter with a touch of bullet-hell, but does that even matter? The eye candy is the motivating factor. All I want is an excuse to spazz out to mathematical equations as they unfurl across the screen. I respect the solid game design of twin-stick shooters, but let’s be honest. At this point, I have played enough of them to satisfy my craving to blow up throngs of glowing objects for the rest of my life. The reason I keep coming back is that they are so modern and abstract and cool-looking.

To this end, Scoregasm delivers. Mowing through swarms of space debris is satisfying from purely an aesthetic viewpoint. The developer Charlie’s Games must be aware of this, as it has positioned the camera as far back as possible, so that you can admire the entire canvas. The camera is too far back for the good of the game, but just the right distance for taking in the view. The ship, bullets and enemies are tiny, and the boundaries of the levels are simple geometric shapes, giving an impression that this war is raging on a cellular level––perhaps on a microscope slide, or in a drop of water.

The eye candy is the motivating factor.

Sprawling bullet patterns and plenty of glowing particles are the norm for this type of game, but what impresses me with Scoregasm are the circles, which look like ripples in a puddle of rain that is reflecting neon city lights. Enemies spawn from clusters of glowing red molecules, leaving a series of Saturn-like rings in their wake. Your own ship arrives in a circular arrangement that resembles a Buddhist mandala. Likewise, a special attack meter encircles your ship. And the special attack itself is a bomb deployed in a parhelic circle.

The visual design is completed by countless enemies flitting nervously as they attack, a constant beam of pink bullets ripping through them, and numbers like +100 or +200 written in a thin white font marking where they were killed. As for the game proper, it mainly serves as something to hold your attention while taking in the sights. It controls competently, has a ton of hidden content, and mixes things up enough that you forget you are playing yet another twin-stick shooter. But the bigger accomplishment is the way it uses the implied rules of the game to create beautiful graphics. It turns a routine, of shooting alien spaceships, into a sight to see.