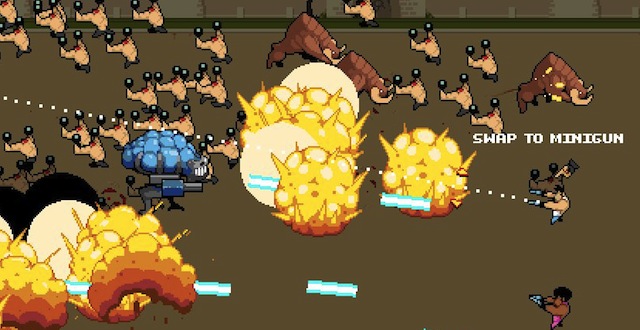 It’s taking all my strength of will not to make a “serious” pun somewhere in this review. This is difficult because anyone familiar with Serious Sam, Croteam’s first-person shooter series, knows to expect a litany of irony, absurdity, and self-referential humor. That person would also know to expect no less whimsy from the gameplay: hectic battle encounters, with enemies charging from every possible nook and cranny, making you gleefully anxious to round every corner; they would know the thrill of hearing the throaty unison bellow of a headless Kamikaze wave as they took a shot, setting off a volatile chain reaction of enemy explosions—kind of like dominoes. Except they blow up.

So how was Vlambeer’s reimagining of Serious Sam as an 8-bit, turn-based role-playing game supposed to capture the spirit of the original series? If you haven’t gotten the joke yet, Serious Sam is centered around encounters—it’s subtitled the First, Second, and now Third Encounter. Serious Sam: The Random Encounter is split into two sections: a world map and a battle arena. Walk over the world map, in a manner reminiscent of top-down RPGs like Dragon Quest IV or EarthBound, and you will find items and keys, and run into random encounters—see what they did there?

Enter the battle arena, and things start to get weird and wonderful: the turn-based portion of the combat allows me to designate a weapon and action to each individual member of my party, even going so far as to allow me to manually angle the trajectory of each weapon. When a turn is done, I’m responsible for moving my party up and down the screen as they run backwards from an approaching horde. To make life more interesting, I don’t know how many waves to expect per encounter, and I must coordinate my weapon type, angle, and possible item usage according to whatever enemies happen to spawn per encounter.

This is probably among the most innovative turn-based combat systems I’ve ever seen. And the encounters are fun, each one representing a strategic puzzle that allows for planning, dynamism, and spontaneity all at once. This makes sense—the combat has to be innovative in order to translate the hectic language of Croteam’s take on the FPS into a turn-based RPG. The random encounters do, for a time, trigger the feeling of excitement and panic as I progress through the maps, trying to unlock doors. The unusual hybrid battle sequences do, for a time, make me worry about every angle, every nook, and cranny—inasmuch as this can be accomplished on an isometric plane.

The writing in Serious Sam: The Random Encounter is rife with tongue-in-cheek self-awareness. Playing off the plot from The First Encounter, Sam Stone is sent to the future, rather than the past, using the trusty Time-Lock, in order to seek and destroy series super-villain Mental and his horde. As the player progresses through the world, Sam meets two “oddball mercenaries”—a Blaxploitation caricature named Bam and Bim, a broad-shouldered cross between Lemmy Kilmister and Johnny Bravo. The three characters deliver wisecracks in text boxes, paralleling the goofy one-liners of the three-dimensional Sam Stone.

And yet, as clever and intriguing as all this genre-shifting is, I’m not sure it holds up. The game only takes an hour or so to complete and I still found myself asking when I’d reach the final boss. The reason for this is very simple, and one I’m not sure Vlambeer is able to circumvent despite its ingenuity: Random encounters are damn annoying. In the original games, the encounters are what the player looks forward to, since everything else feels like a lull in the action. In The Random Encounter, the sudden transitions to the battle stage actually feel like they halt forward progression, particularly if one happens to use up their three lives, forcing them to restart at the beginning of that map.

The stages are admittedly small and the “puzzles” are simple and almost peripheral, but the battles are many, and offer sometimes unpredictable difficulty (although most aren’t terribly hard). They begin to feel like grinding, but with no real purpose. Sure, I unlock guns and items, but this takes fewer battles then I end up facing. I don’t level, so I don’t have any pragmatic rationale for battling. The game, then, feels like it’s pulling me in two different directions: one that demands that I complete some little puzzle to face the next boss, and one that demands that I stop and face waves of enemies every second step I take. I mean, seriously?