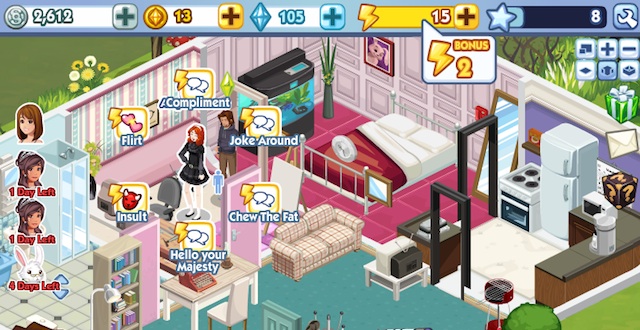 I started to understand why 28 million people are playing The Sims Social when I walked into my friend’s home. We’re all familiar with scoping somebody’s apartment for the first time, judging them by their posters, their DVD collections, the books they don’t own. I’ve practiced this casual voyeurism at house parties, on new friends and old lovers. What would my friend’s virtual home betray about her?

“Who is this person? Am I chasing that promotion just to get an solid oak table? Is my goal in life to get a home stereo system?”

But my first visit was out of necessity. In The Sims Social, the Facebook tangent of one of the bestselling games of all time, you control a glorified version of yourself and try to live out a middle-class existence. For the sake of my character’s morale, the game demanded that I say hi. My friend was “there,” but not actually playing—i.e., her avatar was there, but she herself wasn’t. The avatar’s presence is a subtle nod of approval. It makes the act somewhat less creepy, less like you’re breaking into someone’s home, and more like you’re at an open house with a dead-eyed but smiling real-estate agent. I strolled into the house and started to look around. Her place was cavernous compared to my modest starter home.

Will Wright, the creator of The Sims, SimCity, SimCopter, SimAnt, etc., has said The Sims is supposed to be a mirror of the player. How you play reflects your personal goals. I wonder if Wright honestly believes that. Every interaction in The Sims is centered on consumption and accumulation. Your goal in The Sims is to be happy—by making sure you’re fed, bathed, and social. But you want to be happy because you’ll do better at your job. Doing well at your job gets you a promotion, which in turn gets you more money. More money means you can buy more stuff, remodel your home, and add rooms to house your stuff. New stuff usually gives boosts to relaxing and bathing, which improve happiness. Happiness makes you better at your job. Players have done some interesting things within these bounds—but that is in spite of the rules governing this Marxist’s nightmare, not because of them.

A game of The Sims usually ends when I start to ask, “Who is this person? Am I chasing that promotion just to get an solid oak table? Is my goal in life to get a home stereo system?” When possessions become my goal, the game stops being a reflection of my values and becomes an extended Sunday walking through an IKEA catalogue (sans cheap breakfast).

In The Sims Social, I still have to govern what my Sim does and when. The difference is that the other Sims aren’t AI creations; they are my Facebook friends who are playing. I am free to visit and watch what they’ve done with their place.

Going from one home to another, I noticed similarities—the same paintings hanging on walls; that arcade machine I had definitely seen before; that high-definition TV on the wall, opposite the lime-green loveseat. The same furniture appearing over and over again. This is a far cry from the virtual world Second Life: nothing can be created, only bought and arranged. If The Sims let you wallow in your own private materialism, The Sims Social really drives home the idea of mass consumption.

That falls on the game’s shoulders, in part, because it has tried to get around the long-term boredom that set in with The Sims. Jobs in The Sims were passive events: the character would leave the house and come back several hours later. But The Sims Social replaces them with missions, little tasks that ask you to collect items or buy a piece of furniture or raise the value of your home, which means buying more stuff. They reward you, in turn, with money or more items.

Yet there is still nothing in The Sims Social that will quite match my slabs of department-store shelving on flower buckets. Or my friend’s custom wood-panel vaporizer that looks like it was made in a ’70s shop class. There are no personal idiosyncrasies, like the painting of the many roles of Bill Murray hanging in my girlfriend’s living room. The game asks us to turn these acres of virtual land into something uniquely ours, but it doesn’t provide nearly enough freedom.

How do I know this girl again? High school? Elementary school? Does it matter? What do I know about her now? She likes pink.

Back to the girl I know from high school, and whom I absolutely never speak with (even on her birthday, which is the only time everybody on Facebook feels obligated to say something). Her cavernous house is a deleted scene from Grey Gardens. Masses of furniture in rooms, Hoarders in the age of endless bandwidth.

How do I know this girl again? High school? Elementary school? Does it matter? What do I know about her now? She likes pink. According to her Facebook status she received a red KitchenAid stand mixer for Christmas and she is really excited about it. Might her hoarding in the game actually be an accurate reflection of who she is? Perhaps, but how much can be said about a person in a status update? How many “Likes” does it take to know someone?

I can “Get To Know Somebody” in The Sims Social. My Sim will speak gibberish to another Sim, and a small slider will indicate that we are inching toward being acquaintances, or maybe even friends. Messages from real human beings are usually requests—every day—for help in the game. “I need a MEMORY UPGRADE to complete my ART” (wait, what?), one says.

These relationships are, of course, about our own needs. They replace genuine interaction with features that simulate communication. Given the game’s venue, this is to be expected. I keep going back to The Sims Social’s isometric view: a home with missing wall, so we can peer in. Instead of talking to each other, we broadcast. We ask for help, or sympathy, or attention, or affirmation on Facebook. There is no intimacy in The Sims Social.

I leave my friend’s place and warp back home. The next time I load the game, it displays the slogan: “Build a home. Build a relationship. Build a life.” But like Facebook, the game frustrates these goals rather than furthering them. It barely allows for self-expression or real interactions with people. It’s an antisocial game.