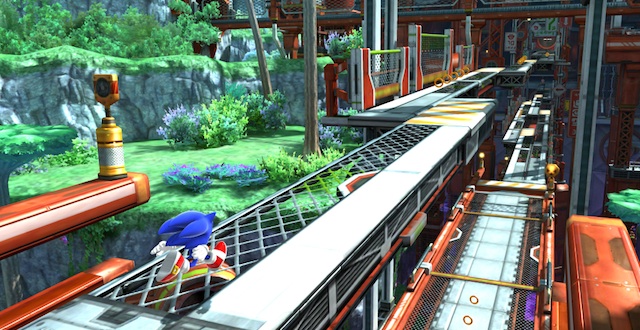 Think of your favorite roller coaster. If you don’t have one, any roller coaster will do. Now, imagine a videogame based on it. Think about all of the problems that would arise, basing a game on a coaster. How do you rework a ride—where the extent of your involvement is to throw your hands up and scream—into an interactive experience? How do you capture the rush of plummeting nearly straight down on a screen six feet in front of your couch in a dimly lit room? Now picture how exhilarating a roller coaster ride would be the moment before the car loses control, coming off the track around a sharp turn and crashing into the shrubbery below. That is the picture of Sonic Generations.

In Sonic Generations, the cheeky blue insectivore returns for his yearly loop-de-loop, this time blurring through familiar (and not-so-familiar) locations from the series’ checkered past. The “Generations” in the title is a nod to Sonic’s 20th anniversary. Not only is it an excuse to play as two different Sonics—the stubbier classic Sonic, and his lanky, womanizing, later incarnation—it also gives the team a reason to rehash scenery from older games. Generations begins as a reimagining of Green Hill Zone––the ground Sonic first set his lead foot upon in his initial outing on the Sega Genesis. But besides the blatant fan service, collecting gold rings and attacking computer monitors to gain extra lives are perhaps the only vestiges of Sonic’s past.

Generations dichotomizes Sonic’s evolution through the years. Each Zone on this reunion tour has two acts: one presenting the 2D side-scrolling Sonic of old, and the other utilizing the 3D perspective that became canon in Sonic Adventure for Dreamcast, in which Sonic zips along a track toward a vanishing point at the center of the screen. This division isn’t as cut-and-dried as it sounds, however, as the camera is dancing the lambada—spinning and switching positions throughout. Nor is it as simple to side with prevailing wisdom and say that 2D Sonic is good, and that 3D Sonic is the reason Sega isn’t allowed to make consoles anymore.

Whatever the perspective, the problem is this: When Generations looks like a roller coaster, it no longer feels like a game. It goes on cruise control when Sonic does anything spectacular. Whether you are twisting through a corkscrew that spirals into a double loop that skyrockets you atop a villa, or hitting a speed boost that catapults you onto a rail-grind, Tony Hawk-style, beneath a pod of airborne orcas, the only action that is required of you is to press forward—if even that. And when the reigns are handed back to you, you are going so fast that you will probably collide headfirst into a mechanical ladybug, or miss your exit, or skid into a bottomless lagoon.

Still, I hesitate to say that Generations is too fast for its own good, because the best moments to be had are the rare ones when the stars align—when the platform hopping, the 40-yard dashes, and the timing-based meta-game, which basically amounts to pressing the right button at the right time, fall into place. In those instances, it almost feels like you are riding in the front car of a roller coaster, thumbing a dual-analog controller to keep it on track—only without the wind blowing your hair, and the mild dizziness, and the nervous tension in your chest. More likely, however, you’ll need to play through a segment 25 times to master the flow. By then, the sensation will have been diminished by practice.