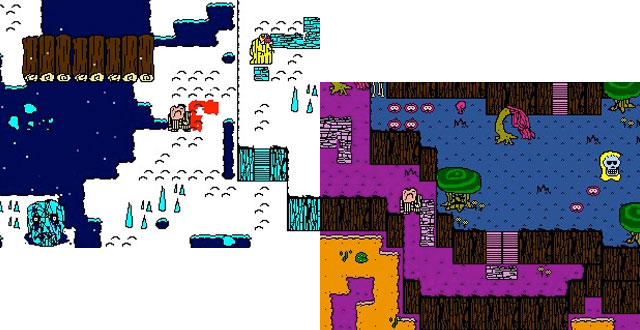 A few months ago I played a visual novel for the Nintendo DS. The particulars of the game are mostly unimportant. What stood out for me was the weird flavor some of the bad endings had. Stray bits of dialogue lingered in the air, opening avenues to unexpected twists in the plot. Replaying the game had the strange effect of amplifying the allusions made in previous trips. By my third play, the reverberations were haunting.

Then I came to the game’s true ending, and that all came crashing down. The narrative took pains to tie up every loose end. Every interesting avenue became a dead end. Every character was explained. Every enigma answered.

There’s a certain maddening need for everything to make a sort of sense. In games, narrative cohesion comes at the expense of abstract, emotional responses. Maybe it’s because games are rule-based systems. An underpinning of logic infects everything else, even to the detriment of the game. Any sort of messiness is avoided.

I love Space Funeral. I love how odd it is. I love the gaudy yellows and pinks. I love the surf-rock-of-the-dead tune “White Waking” that plays throughout. (I love the audacity of using Japanese ’70s noise rock in a game.) I love that the protagonist is in pajamas and perpetually sobbing. I love that it uses a song by Love as victory music. I love the Lynchian dialogue. I love that it’s free and was made with RPG Maker, which has probably churned out thousands of uninspired clones. I love that you start the game next to the dead body of the protagonist, and that everybody tells you it’s too late to do a damn thing about it.

But Space Funeral also pulls this skin onto a traditional role-playing skeleton. The systems are decades old. Battles are random and turn-based. Punches are exchanged. You gain experience points, grow, learn new abilities, move on.

This gives Space Funeral a sort of power—transporting basic gaming grammar into a weird and wonderful little world. There’s a baseline of logic. Even if the world doesn’t immediately make sense, anybody who’s picked up an RPG will get the rhythm of the game, even if the melody is foreign and alienating.

This also has the effect of neutering that very wonderful weirdness, where instead of dragons and princesses, there are headless horses and Squid Pirates. There is nothing fundamentally new in these turn-based battles. Yes, yes—I see that I can sob instead of fight, and that I use blood instead of potions; but aside from the new dog’s old tricks, what are we left with? The gameplay doesn’t function as metaphor, doesn’t enlighten the experience; though it’s the primary way you interact with the world. You have to fight to get through the game. I found myself repeatedly tapping my keyboard, fast-forwarding through the battles, which aren’t even challenging after a certain point.

If we dissect an RPG with a scalpel, we will find a dense framework of numbers arranged in spreadsheets. Even a game as fresh as Space Funeral is held together by numbers and logic. Nonetheless, it was one of my favorite games of 2010 because it manages to grow something out of these constrictions, instead of being confined by them. Space Funeral, with its proclamations that it is already too late for the hero, with the howling of ’70s psychedelia and the loudness of clashing colors, boldly declares that it’s different. How can I not be a little disappointed that while I’m compelled to explore, all the game wants to do is fight with numbers?