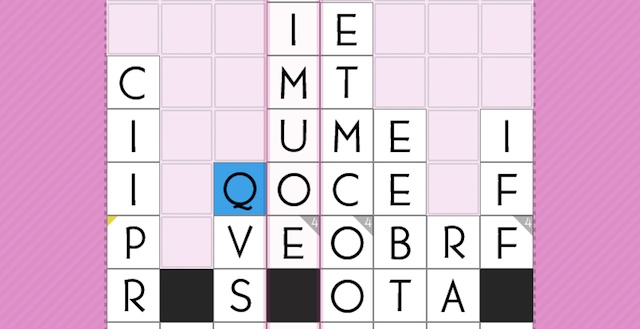 Coming up with anything to say about SpellTower is tricky. How do you even start to critique a word game? It’s funny that I had nothing to say about a game that is about words—and that I only got the ball rolling by thinking about something else. As I stared blankly at my computer, I noticed that the iPad game has a striking similarity to the keyboard. The tiles that are used in the game are a near-exact match for the flat, cleanly written keys of a Macbook. And just as the keys of my laptop are placed in QWERTY layout, an invention that rearranged the alphabet in order to make typewriters less likely to jam, the tiles in SpellTower are randomly stacked in a tower—scrambled with the intent of confusing my familiarity with words.

The idea is to find words randomly buried within a screen of mixed-up letters. You draw lines through the letters to spell words, moving up, down, left, right, and diagonally across them. This causes the letters to disappear. The other idea is that math will try to stop you. You must conform to a set of rules that has nothing to do with verbs and nouns and adjectives, making it hard to recognize words that are churned out randomly. Not only does it make for a brain-picking puzzler, it illustrates the challenge of talking about game systems, which are fundamentally different from the way people speak.

If we were having a conversation, I might say that SpellTower goes well with a cup of coffee, or while halfway-watching an episode of The Walking Dead. I might tell you that it is fun and well designed, but this says little about the game itself. Another option would be to go over the rules at length, describing how the tiles have a gravity, and how they drop to fill in the gap left by words you remove from the screen. I could talk about how the tower grows taller over time, as new rows of letters push old ones toward the top, as if Planet Puzzle League has been built out of a thesaurus. But this simply recites the facts. Another option is to do both: recite the facts while telling you about drinking coffee and watching TV; but that solution is neither here nor there.

Not only does it make for a brain-picking puzzler, it illustrates the challenge of talking about game systems, which are fundamentally different from the way people speak.

I was at a loss for words. First, while playing SpellTower, and, then, drafting this review. It is fairly hard shifting through a random batch of letters to find a highly prized word. It is even tougher to sort through my experiences with the game’s basic rules and find something readable to say about them—something that doesn’t wind up sounding like an instruction manual, or me telling you the story of the time I nearly read through the entire dictionary before petering out at the letter S. I’m either on a subjective whim, or boring you with facts. In my effort to make sense of SpellTower, I felt suspended between two things that seem similar, but are actually far apart: a game, and my own personal experience with it.

SpellTower needs to be approached from a different perspective. To score more than a paltry three- or four-letter word requires a lot of lateral thinking and a bit of luck. Many times, I could almost spell out long words, but as I traced my finger over the tiles, I would reach the end and find that the final letter was missing. It would be one too many rows over, or two rows above. Through a variety of moves, which had little to do with words, I could clear the tiles between them, and the letter I needed would tumble down in line with the rest. Then, I could complete the word. I can’t expect to play SpellTower by simply spelling things out. The same goes for writing about it. The best strategy is to attempt to work within the system and hope that words fall into place.