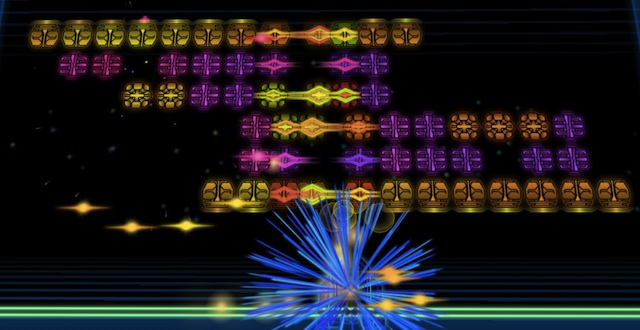 Early design docs for the Crossfire series were recently posted on the Radiangames blog. I was surprised to see how simple they were. The one that stuck with me was a sketch of a single rectangle on a piece of graph paper. Inside the triangle, along the bottom edge, the designer Luke Schneider had drawn a small cone that represented a gun. Above it, he had noted that he would like for the gun to move left and right, and have the ability to fire, warp, and use a special power. And that was it. While Super Crossfire has grown out of that small idea into a shooter that is loaded with bells and whistles, the drawing illustrates how simple the game truly is.

It is so simple that going into details seems overly exhaustive. You only need to pick it up for a second to understand how to play. You move side-to-side, like in an extremely slick envisioning of Space Invaders, shooting rows of spare robot parts that drift in the median. The twist is that you can flip to the other side of the screen so that you are on the ceiling, blasting the robots into scraps from overhead. The game takes the idea and runs with it, throwing in targets that have to be shot in their backside, as well as more bullets than you can count.

The advantage of simplicity is that it gets all of the pretense out of the way and cuts straight to what is important.

Super Crossfire doesn’t waste time with introductions, and neither should we. The advantage of simplicity is that it gets all of the pretense out of the way and cuts straight to what is important: hammering on space junk, narrowly dodging a curtain of bullets, and collecting little shiny purple things. The moment the game begins, your guns are already blazing. Nothing (aside from a momentary upgrade menu) steps in between you and the action. Super Crossfire has an immediacy that isn’t found in most games. It says go, and you go; and you don’t stop until you’ve drilled through 30 stages of levitating alien cubes—or die in the process.

While simple, Super Crossfire is incredibly fine-tuned, giving it a directness that makes you feel wired into the circuitry of the game. Slide your finger quickly and you zip immediately across the screen (though the controls retain the precision to weave between oncoming gunfire). Tap the screen and you warp instantly behind enemy lines, letting you run circles around the invaders. Tap the special-power button and you’ve burrowed a hole in the defenses before you have let go. When you lose a life, the screen shakes to let you know, but otherwise you keep right on gunning.

Super Crossfire sucks you in and holds you for the duration. It makes an immediate connection, which feels like mainlining source code. The enemies shoot at you. You warp and shoot them from behind. They readjust, blocking your shots and returning fire. You warp again, blow one up, and slide out of the way. They move, and you react. You move, and they react. What could be simpler than that?