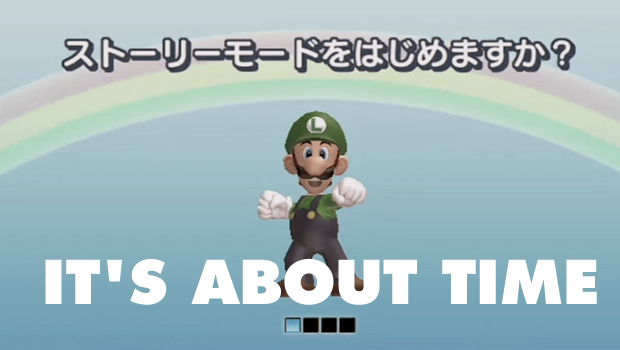 We need to talk about Luigi’s shoes.

The guy’s sneaks have no tread and it’s making me crazy. Nintendo went so far as to name 2013 “The Year of Luigi” and they’re still outfitting him with the no-grip slippers he’s been trotting around in since 1986.

They’re still outfitting him with the no-grip slippers he’s been trotting around in since 1986.

New Super Luigi U is in some ways a sequel to Super Mario Bros. 2, but not the one you’re thinking of. One year after Nintendo released their platforming bombshell, they released a diamond-hard sequel for the Famicom Disk System in Japan. It used the original’s assets and played on players’ expectations: a mushroom that looks almost the same as your favorite power-up is now poisoned; whereas certain games might unlock a bonus level after one successful playthrough, Super Mario Bros. 2 required eight. Nintendo of America disliked the cruelty and sameness of the sequel and requested an old Mario prototype, changed into the Japan-only Yume Kojo: Doki Doki Panic, be restored with the familiar characters and released in the west as Super Mario Bros. 2.

Eventually English-speakers would play the lost sequel on Super Mario All-Stars, an SNES collection of 8-bit classics that included the appropriately renamed Super Mario Bros. Lost Levels. Both versions of this original sequel include the option to play a ‘Mario Game’ or a ‘Luigi Game.’ Choose the latter and a hard game becomes even more treacherous; Luigi jumps higher and farther, yes, but he slips and slides like a banana-footed bipedal kitten. The traits showed up in the west’s Mario 2, but not until New Super Luigi U has an entire game been designed for the green younger brother. 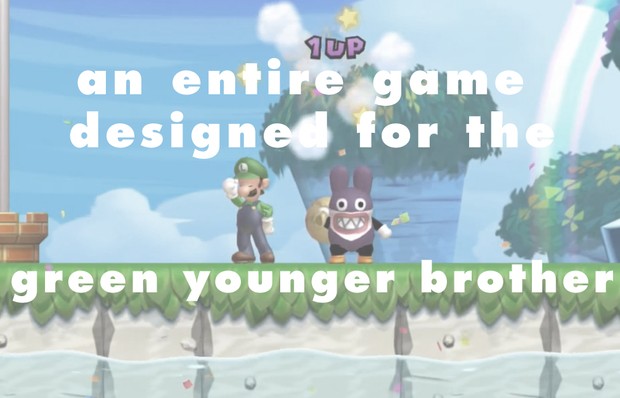 From the choice of your protagonist’s footwear onward, Luigi U is a return to Tezuka’s devious ways.

Takashi Tezuka directed that original sequel, deemed too frustrating for the western world. Now Tezuka is back, producing Nintendo’s first-ever large-scale DLC. Luigi U is an extension of last holiday’s New Super Mario Bros. U, a 2D platformer that never veers too far from the (very successful) formula etched out over decades. From the choice of your protagonist’s footwear onward, Luigi U is a return to Tezuka’s devious ways.

If anything, New Super Luigi U is proof that two-dimensional platforming has not yet been squeezed to a dry husk.  The influence of Japan’s Super Mario Bros. 2 is especially visible in the past few years. Super Meat Boy redesigned the classic platformer for an ADHD age. Upcoming Cloudberry Kingdom replaces a masochistic mind with satanic algorithms, its evil platform design the work of a processor nudged into being with evil intentions. New Super Luigi U returns the brunt of our blame onto flesh and blood, and one’s desire to have their own boil with rage as something so mild as a single block, placed purposefully, can invoke the kind of unhealthy squalor visible on shipwrecks with limited rations. 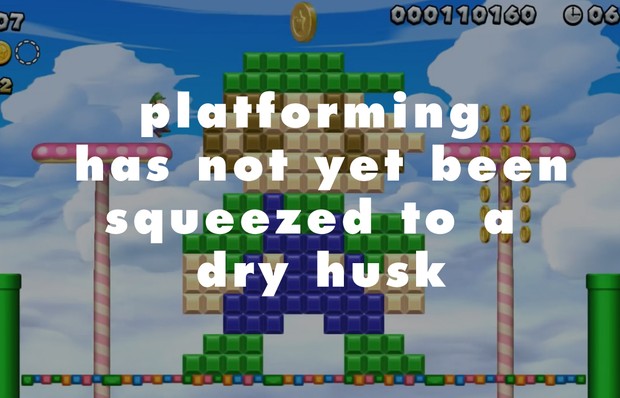 Something happened yesterday that hasn’t happened in twenty years while playing a traditional 2D Mario game. Having one life left, I fell into a pit and died. “Game Over,” my screen said, the chunky font a vibrant green. Game… over? Of course, this phrase is a misnomer by now; I could begin again from where I left off, but with one glaring difference. Before letting me loose into this gauntlet of moving platforms and flying turtles, a menu popped up, showing my Life Counter clicking up from zero to five. By the grace of Tezuka I have been given another chance.

And the game doesn’t let you forget. A previously absent detail pops up: “Continues: 1.” New Super Luigi U doesn’t stop at stopping you; it checks off each time you fail to complete the quest as expected, lodging an asterisk next to any future triumph. To the competitive or obsessive-compulsive sort, that “1” mocks your achievement, tainting it with the filmy scum of second-chances and do-overs. Nintendo’s layer of scorn is the worst kind: Given nonchalantly, with the shrug of a shoulder and a knowing smile. “Hey, you did it!” the game seems to say. “You only failed once. Good job!”

Roger Maris hit 61* home runs in a 162-game season. Avatar earned the highest all-time box office* gross in 2009 currency. But in the fairy tale of history, few loom larger than Babe Ruth or Gone with the Wind. Nothing erases like an exception.

I beat* New Super Luigi U using only one continue. History may not remember my valiant effort, imperfect as it was. But I won’t forget Luigi’s game, a balancing act on razored tightropes. If only he’d worn better shoes.