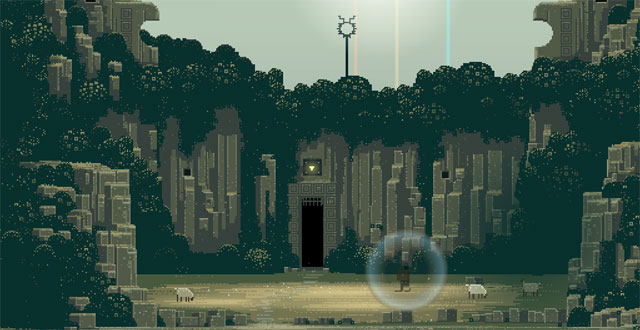 I want to hug everyone who had anything to do with this game, but I have to do that with words first. So, let’s get to it before you dismiss this review as fundamentally unserious and click over to a technical white paper on pathfinding algorithms.

Superbrothers: Sword & Sworcery EP is a transportive, cunningly woven adventure game that oozes confident work from every pixelated crenellation. It manages, with reverent deftness, to evoke and honor the influences of its creators, while simultaneously providing a multisensory experience that feels novel and groundbreaking today. A landmark achievement, it raises the bar for independent game design much as the Washington Monument did for independent obelisk design.

For all that, it’s not an easy game to pin down. Its story is a vividly strange stew of myth, pop psychology, and prog rock that merits immediate entry into the High Concept Hall of Fame, right between Laser Floyd and The Silmarillion. Its gameplay feels a bit like playing a traditional LucasArts adventure, but by swimming in a pool—fluid, with every touch generating a response from the environment. Inspired by this direct connection, the game’s stellar puzzles elide familar tropes by compelling players to bend and fold the land, manipulate the cosmos, and play waterfalls like harp strings. And it all feels natural, largely thanks to Sword & Sworcery’s talent for rewarding even the smallest interaction. Like a well-executed joke, the pleasure is in the experience more than it is in the retelling. You have to be there.

There’s a relevant moment in the original Secret of Monkey Island, or at least the spruced-up CD-ROM edition that was original to me as an eleven-year-old. It happens when you first guide Guybrush from the game’s introductory area: You see the entire VGA glory of Melee Island for the first time, this lush, fully realized place; and something in the swell of the calypso music whispers, “never mind that you only wear sweatsuits, this is yours to explore.”

Sword & Sworcery brims with such synesthetic concordances, engaging the reptile brain as fully as the waking mind. The first time I experienced the game’s initial chase sequence—you’ll know it when you see it—the aggregate effect of low light, forboding statuary, and ever-intensifying low-range audio cues had me primed to flee well before there was any pressing reason to do so. Playing Sworcery, I remembered this passage from George Sanger’s 2004 memoir, The Fat Man on Game Audio:

Nobody can really imagine, yet, what truly successful interactive music sounds like. They don’t know how the music would have to act in order to seem as though it was intentional and to feel as helpful to the game as a good film score is to the film…. that will only come with time.

This comes from the person who composed or arranged some of classic gaming’s most musically immersive titles: Loom, Ultima Underworld, and Wing Commander II, to name three. I have good news for the Fat Man: His prophesied game has arrived. The soundtrack of Superbrothers: Sword & Sworcery EP feels less like a feature than it does a collaborator, a backing band where everyone’s played together for ten years and one guy’s nickname is “Fingers.” It works in concert with your actions, both anticipating what you’re about to do and building on whatever you’ve just accomplished.

The result is something of a symbiotic relationship. Sworcery operates like an orchid, using your actions as a player to sprinkle themes and motifs around the game, in the process building melodies that culminate in tremendous crescendos. The tinkly faerie-xylophone motif triggered when a rabbit dashes into the woods, for example, reappears in the theme that plays on your first ascent of the dread mountain Mingi Taw, slowed down and rather more heroic, like it just beat The Legend of Zelda. The spare, repetitive sketch of a guitar riff early in the game pays off with a moment that caused me to stare dumbfounded at my iPad for five minutes. It could have been twenty! For all I knew I was going to walk away with a giant Rip van Winkle beard.

Part of Sword & Sworcery’s hypnotic appeal lies in its knack for conjuring longtime gamers’ remembered spaces. There are recognizable touches of Loom’s moody landscapes, Prince of Persia’s rotoscoped subtlety, and Myst’s puzzle-festooned set pieces, to say nothing of the combat system’s oft-mentioned resemblance to Punch-Out!!. Far from pastiche, however, the naturalistic ease of Superbrothers’ art creates an internally consistent sense of place, lending even its oddest denizens (say, a naked dancing bear) the gravity of something tangible.

Your protagonist, a female warrior-shaman known cryptically as “the Scythian,” perhaps best embodies the game’s expressive simplicity. By the physical markers of gender observed in most games, the Scythian is all but androgynous. The single pixel that makes up her face is to one of Lara Croft’s breasts what a basketball is to Jupiter. And yet—by a turn of the hair, something in her readiness posture after a clean sword hit, a tranquil empathy in her bearing when she sings songs of Sworcery—she is unmistakably female. The game also conveys that she is looked up to. The way one non-player character stands up every time you walk by—even when you don’t acknowledge her—establishes the Scythian as a respected female role model, right up there with the confident command of Mass Effect‘s Shepard. Even then, that was a whole game about saving a galaxy, and this is ten frames of animation.

Like a well-executed joke, the pleasure is in the experience more than it is in the retelling. You have to be there.

Sword & Sworcery‘s mercurial idée fixe—the moon—may also be its closest metaphorical analogue. The game literally changes with the moon’s phases, such that to “properly” play it means waiting a full lunar cycle for its story and mechanics to play out. At the same time, to properly review the game means finding ways to cheat that system, which I am pleased to report the game helpfully, if clandestinely, provides.

As with the moon, Sword & Sworcery has its blemishes. Your in-game actions generate bits of tweet-length meta-narration—you might’ve caught one or two thousand of them in your timeline over the last week—which generally feel like playing with a helpful little brother, but on occasion verge into the distracting with an ill-timed “amirite.” And there’s a fine line between easing the player into the game’s tactile language and having a few too many puzzles that boil down to touching features of the landscape in order.

All told, these are minor imperfections, and when the moon shines brightly enough they tend to disappear.

I consider Superbrothers: Sword & Sworcery EP to be something of a digital act of bravery. I have no doubt that to develop a game so rigorously steeped in its own, weird universe required a huge chunk of soul. And for the people who made it—Craig “Superbrothers” Adams, Jim Guthrie, and everyone at Capy Games—to have mined the depths of their most treasured gaming experiences in the bargain? Two or three chunks of soul on top of that.

But this is the dare of nostalgia. You grow into the person you could only guess at when you played your formative games, and suddenly it’s incumbent on you to make them yourself, for the next generation to shape themselves around. For me, this game will always be a totem: at once providing the kind of immersive escape I associate with my fabled middle-school basement days, while throwing down a gauntlet about what it means to design, ship, and sell videogames in the present.

Note: Score subject to change at next moon.