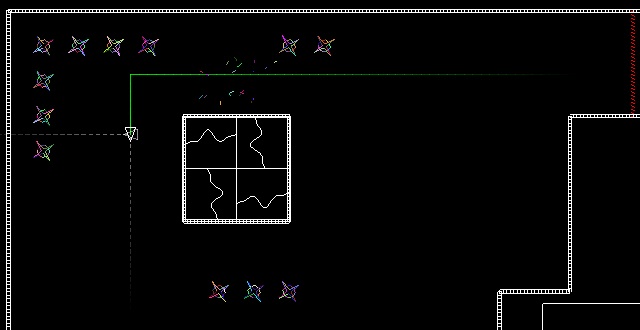 There’s a story I heard once. Maybe one out of the abridged Aesop. One day a caterpillar goes out for a walk. He passes by an ant, who in all her days has never seen a caterpillar.

But the caterpillar can’t stop thinking about it. He takes a step, very conscious of how he is doing it. But his legs aren’t working. They step out of sync, trip up on each other. Every time he tries to remember how he did it, the act of taking a step that was as automatic as breathing, he gets tangled and falls over.

Let me paraphrase the moral: How do we use a controller? Or a keyboard? Or a touchscreen?

If you were to describe Swift*Stitch, it wouldn’t sound like much at all. An arrow moves and you hold a button to make it move in a different direction. Get it to the finish line. Watching somebody play, the appeal is still invisible. You see the arrow glide in one direction effortlessly and turn on a dime. There might be some close calls and some particularly winding paths; but to really get it, you have to watch their hands.

It is easy to forget that doing nothing can be more helpful than doing something.

I’ve used controllers since the age of four. And, yeah, we’ve gone from a directional pad and two buttons to two analog sticks, four buttons and two triggers, but there is still some basic rhythm there that is fundamental. So fundamental, sometimes, that I can’t understand how it’s not intuitive. We are well versed in our own brand of marionette puppeteering. The golden rule: If we don’t press anything, our character doesn’t act.

So watch the hands of somebody playing Swift*Stitch and you realize that your arrow moves horizontally without their help, without any input. Watch how there are times when the urge to press something, out of habit, almost results in a crash. Watch how inaction becomes a verb for a split-second. The name of the game, Swift*Stitch, is a tongue twister and a warning: You will get tangled up.

Sophie Houlden’s design is based entirely on lack of control. Holding the button makes you go off on the vertical axis, but the actual direction is predetermined, and changes, in each stage. Some stages have you ricocheting between tripwires that change your direction, or force you to move in curves—which theoretically means you have more freedom of movement, but are yet another constraint in Houlden’s hands. The game calls for a careful awareness of the space you’re in, and knowledge of how to twist it to your own ends. It is a straitjacket, and perhaps that’s why the urge to press a button is so strong. It is easy to forget that doing nothing can be more helpful than doing something.

The game is also surprisingly generous. Pausing is allowed at any moment. The map can be zoomed in and out. There are speed settings. There is a button that slows the action for a few seconds and can be used an unlimited amount of times. The game is still difficult, without any cheap tricks, except for the central one: exploiting every gamer’s habit to press buttons. Swift*Stitch is like an ant, asking how I manage to keep track of what’s going on; and every time I play, I trip up.