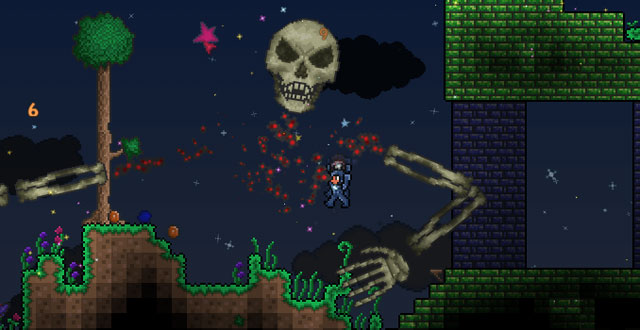 Terraria makes no attempt to hide its main influence. Why would it? Minecraft players will never exhaust the infinite experiences that game has to offer. Terraria’s similar focus on exploring, mining, and crafting in a randomly generated world is a sure way into the wallets of Minecraft’s fan base, but a risky way to construct a game. The line between flattery and mimicry is a tedious one at the best of times, but it is one that Terraria, for the most part, successfully traverses.

If Minecraft has the elegant structure of a haiku, Terraria is a washed-up Beat poet who hasn’t slept for three nights, scrawling on sheets of paper—eccentric, eclectic, but still able to enthrall. Minecraft boasts a Zen-like lack of objectives and worldly possessions, but Terraria is filled with gadgets, environments, grappling hooks, Rings of Regeneration, imps, Zelda-esque heart containers, short swords, zombies, rocket boots, magic missiles, giant sandworms, lightsabers, boss battles, non-player characters, and laser rifles. Everything Minecraft leaves out, Terraria throws in. This isn’t two-dimensional Minecraft; this is anti-Minecraft.

You start at dawn, plopped into a wild, untamed world with just the clothes on your back and a copper pick and sword. You have probably been here before. You know the drill: get some wood and build some shelter before nightfall. But unlike in Minecraft, you are not alone. A man is with you, and he is full of useful advice. He tells you that if you build houses, other characters such as a merchant, a nurse, or a gunsmith will move in to sell you items. If you obtain enough certain items or slay enough certain monsters, dauntingly huge bosses may appear, or entire armies of goblins might attack your base. From the start, Terraria has the faintest glimmer of goals, of something to aim for.

Exploring underground caverns and mining and gathering resources is, at first, very much the Minecraft experience. But a more varied array of resources and monsters in more defined areas gives Terraria a clearer shape. Certain areas of the map might be plagued by the corruption that turns the grass blue and the sky yellow. Deep underground (at about 3,500 feet) is, quite literally, a hell of fireball-throwing imps and giant skeletal worms.

Yet, for all its content, Terraria lacks polish. Its multitude of items comes at the price of elegance, worsened by a cluttered interface and a clumsy crafting system. Minecraft’s crafting system was never too intuitive to begin with, but it is simple, learnable, and rewarding. Putting wood and stone onto the crafting grid in the shape of a pick makes a stone pick. With minimal items and tools, Minecraft’s system is easily mastered. Terraria, on the other hand, simply jams a list of craftable tools in the bottom-left corner, forcing you to scroll through long lists to find the one you actually want.

For a game so reliant on the crafting of new, more powerful items, it is bewildering that nowhere in the game can you learn what items you are able to craft, or what ingredients are required to craft them. Instead, crafting is a guessing game of putting different items into your inventory and standing beside a workbench to scroll up and down through the entire list to see if any new options have appeared. Certainly, the same criticism could be levelled at Minecraft before its creator Notch added achievements to guide new players; but the Minecraft player only ever needs to master the most basic tools. The point of Terraria is to constantly craft more powerful, unique items, and this is lost when it is unclear what those items are.

However, there is a simple explanation for this: Terraria isn’t finished yet. The developers were forced to release after only a few months of development, due to the game’s source code leaking onto torrent sites. Many features are yet to be fully implemented, while others are still being tested and are not quite tweaked. Multiplayer, for instance, is currently only possible through self-hosting in a second instance of the game and not via Steam.

It’s hard not to see an uncanny resemblance to Minecraft’s own staggered release. In fact, it’s hard to discuss any aspect of Terraria without mentioning Minecraft. But that is far from a bad thing. To play Terraria is to play Minecraft’s antithesis. It is not “better” or “worse.” It has taken the fundamental concept and run with it in a completely different direction. Even lacking features and polish, Terraria stands out as a remarkable title.