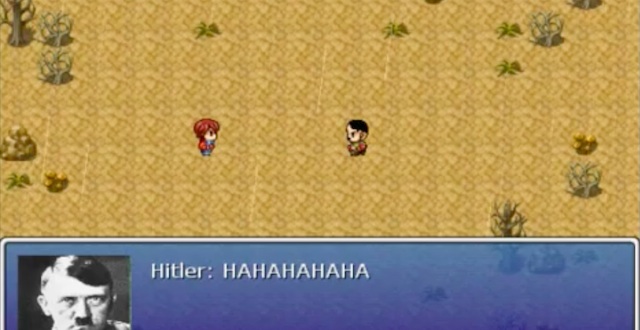 Title:
In the Time Machine Over the Sea

Wait, what the fuck? The first time you see Jeff Mangum’s name misspelled as “Jeff Magnum” in In the Time Machine Over the Sea, you will probably find it funny. I mean, it’s sort of a funny joke, especially in light of the sea of “Jeff Mangum condoms” puns that probably littered your Twitter timeline after his recent ATP comeback performance. So yeah. Jeff Mangum’s name is sort of close to Magnum. BroPortal, the person who made an 8-bit role-playing game about his life, happened to mess that up. BroPortal also spelled Thom Yorke’s name as “Tom Yorke.” So yeah. Attention to detail was not of paramount importance during the making of this game. Neither, evidently, was making a particularly enjoyable game.

“I know they buried her body with others / Her sister, her mother, and 500 families / And she will remember me 50 years later / I wished I could save her in some sort of time machine / Know all your enemies / We know who our enemies are.”

The above quote is pretty much the impetus for In the Time Machine Over the Sea, a game based on an album based on a singer-songwriter’s terrifying dreams about Anne Frank. The idea behind this game is that you, the (probably) bespectacled, erudite gamer who is into other things—namely, indie-rock music from the ’90s—have always wanted to act out five decontextualized lines of a Jeff Magnum—er, sorry, Mangum—song.

Judging from a few oblique references on Aeroplane and some interviews he gave around the time of the album, Jeff Mangum was more than probably obsessed with Anne Frank. He was not, however, in love with her. And only God and the J.D. Salinger of indie rock knows he if actually had plans on building a time machine to go back in time and hang out with Ms. Frank.

The game takes those “Oh Comely” lyrics very literally. You are Jeff Mangum. Anne Frank is your girlfriend. You are hanging out with her in a field, and then Hitler appears out of nowhere and kidnaps her. Understandably, you are pretty bummed about this, and you’re so bummed that you can’t write your next record. You give Tom Yorke a call, and he builds you and the rest of your band a time machine so you can go back and save her. You start out on Avery Island (get it?), and than you find a Spanish Boy (double get it?) who plays a fiery piano (OK, going to stop asking now), who helps you along your way. The whole affair positively reeks of half-assed, fill-in-the-blank fan fiction, and not even the type of fan fiction we read simply out of morbid curiosity, either—it’s just boring. By the time you actually reach Hitler, you’ve forgotten why you even liked Neutral Milk Hotel in the first place, let alone why you’re playing the game.

You are Jeff Mangum. Anne Frank is your girlfriend. You are hanging out with her in a field, and then Hitler appears out of nowhere and kidnaps her.

Anyway, if it’s actually worth it to you to download the game, you will not finish it. There are two reasons for this: the controls are really difficult (eventually, I figured out that as much as I wanted pressing the “alt” key to do something, it wouldn’t), and the game’s difficulty and the dedication it takes to beat the damn thing can’t even begin to correlate with the amount of fun you will have (it takes roughly 90 seconds for Jeff Mangum to fight one of the rats that randomly pop up from time to time, but it takes about three rounds of fighting one of these rats for it to feel rote).

As far as borderline-unplayable music games that have little to no understanding of their source material, this one stacks up with Wu-Tang: Shaolin Style, the little-loved Wu-Tang Clan fighting game that at least had the excuse of coming with a W-shaped controller that you couldn’t fit your hands around. In the Time Machine Over the Sea is not worth your time, your energy, or the ironic street cred that you might earn by beating the one indie-rock videogame in existence.