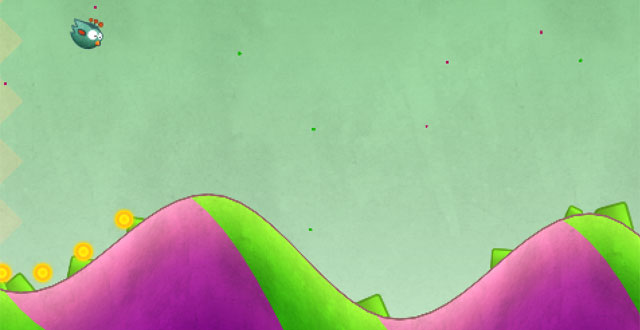 You’ve played Tiny Wings if you own an iDevice. Statistically speaking, it is harder to have not played it. You’re playing it right now, aren’t you?

I’m not offended. You heard its siren call. You blame Carl. He’s a good middle-management type: quiet, but generally friendly. He was playing in the lunchroom, and you, dreading social silence, asked him what he was playing, not really caring what he was playing, because it’s probably Angry Birds; and Ted in accounting already brings up the achievements he has every time he sees you, and, god, you really hate Ted.

Except Carl isn’t playing Angry Birds. He’s not playing Fruit Ninja, or Flight Control. He’s not even playing that Cut the Rope clone Ted (fucking Ted) always pesters you about. This is something new. And it isn’t half-bad. It is 99 cents.

It’s been three days now. You missed your stop today because you were immersed in guiding the bird from island to island, and had to walk three blocks in the snow. You didn’t mind. In between sessions of pretending you’re busy in your cubicle, you take out your phone and play a quick round. There is a sereneness to the rollicking hills Tiny Wings conjures anew every day. You enjoy how the little bird skirts the brightly colored landscape all by herself. Your boss catches you, and when he leaves you curse under your breath. You boot it up again.

You like the way the bird drops when you touch the screen. You like how simple that is. You like that a well-timed drop slides you perfectly into one of these little valleys and makes you soar through the countryside. You like that the game gives you little tasks to do while you play; you get much more satisfaction from touching three clouds in one game than from a spreadsheet. You like that you get a new nest after completing tasks. You like the bursts of confetti that trail behind you when you get enough perfect jumps. You feel it’s an inspirational metaphor for your life: With a bit of good timing you can fly far and fast through the clouds, and get tons of points. You tell Carl all about this at lunch. You think he’s starting to come out of his shell.

Two weeks pass, and you can sense the obsession starting. So can others. Your boss’ visits to your cubicle are more frequent. Carl walks out of the lunchroom whenever he sees you. You have this flash of fear that you’re going to turn into somebody who starves while playing videogames. You read about something like that happening in South Korea. They treat StarCraft like a sport.

It’s not concerned calls from your friends that make you stop playing. Nor is it a text from your ex saying that your work has been calling and she wants to be removed as your emergency contact. What eventually stops you is the race for nests. Upgrading was fun at first. Easy, even. Get three jumps! Make it to the fifth island! Get 100 coins! These tasks were intimately woven with what you love about Tiny Wings. They spurred you on a bit at first, but soon they started to get in the way. They started to feel unnatural.

Reach the fourth island without speed boosts? How arbitrary. You tried several times and failed and ignored it. You were just going to enjoy the game, no pressure. Except now you couldn’t. Every dip and jump was tainted with a sense of underachievement: A better nest means a higher score multiplier means more points, and you could always use more points.

The game started to make you anxious. You finally managed to complete that one quest, because, goddamn, you couldn’t just not do it; but then Tiny Wings threw more at you. Play the game upside-down? It was starting to feel less fun and more like … work. Oh shit, you think, I’m late for work.