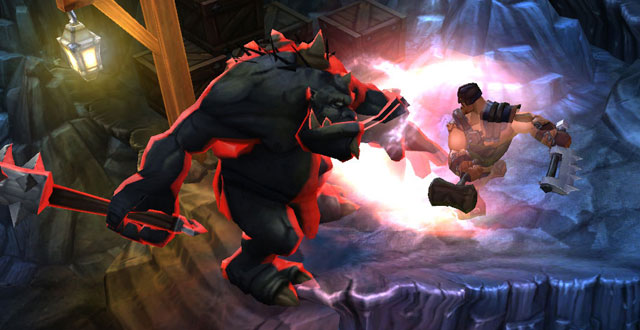 It’s 1:00 a.m., and I am starting to doze as I play. My wife Megan has been snoring contentedly on the couch for the last three hours, and in that time, I have accomplished almost nothing in Torchlight. At this point, I’m not at all sure why I’m still playing.

Torchlight is an old-fashioned dungeon crawl, in the style of Diablo. The town of Torchlight is located above not one, but two monster-filled underground labyrinths: the Ember Mines, the source of the town’s wealth and of its impending doom; and the Shadow Vault, a randomly-generated dungeon of infinite depth. (It seems a bit odd that the game is called Torchlight, like the fantasy epic Shire or the space western Tatooine.) The game’s progression focuses first on clearing out the 35 floors of the Ember Mines, and then delving into the unending pit of the Shadow Vault until, presumably, one gets bored. The pot is salted trivially by a few non-player characters in Torchlight who offer fetch quests and bounties for tasks players will complete without even noticing.

Before she fell asleep, Megan frowned at the screen. She has been insisting lately that I play games that make better movies, but tonight, it seems she resolved to attempt to understand Torchlight.

“So what is this game?” she asked.

“It’s a dungeon crawl,” I said. “You get a pet.” (This is usually vital game information for Megan.)

“But it seems like all you’re ever doing is flipping through windows.”

I have nothing to say to this criticism. I have lately been aware that the ratio of time spent in the dungeon to time spent in town has been steadily shifting toward parity. Torchlight is a game of randomly generated gewgaws, and so I end up spending a significant measure of time identifying and sorting equipment. The item system is so complex, with a staggering range of enchantments, that I am constantly making overwhelming comparisons. How do I decide between two items when they each have 11 different effects, spelled out in tiny blue writing, and all of them are beneficial to my character?

When I’m not wrangling gear, I’m wrangling ember, the gems that add customizable boosts to items. Either I’m transmuting gear to make gems, transmuting gems to make more powerful gems, or sorting gems. At my point in character development, I am encountering gems of nine different types at eight different quality levels, meaning I might have as many as 72 unique gems. Because there is no gear-sorting system, I spend considerable amounts of time manually sorting my gems, shuffling equipment item-by-item from my inventory to storage.

At first, this was a direct result of my work in the dungeons, but I have since discovered a gameplay hole resulting in infinite gold. So, for the last 90 minutes, I have been purchasing enchanted items from vendors, transmuting them to gems, and combining those gems. I have entered the dungeons only because that forces the vendors to refresh their inventories.

As I shut down my Xbox 360, I realize that at some point I have undergone a conceptual shift. Instead of thinking of inventory management as something I do to support my dungeon crawl, I think of dungeon crawling as something I do to support my inventory management. The premise of Torchlight has come true. Having eliminated the monsters beneath the town, the dungeon has reverted to a mine, serving resources to the town above. This running back and forth between my stash, the vendors, and the transmuter—this is the game. Torchlight is really about Torchlight.