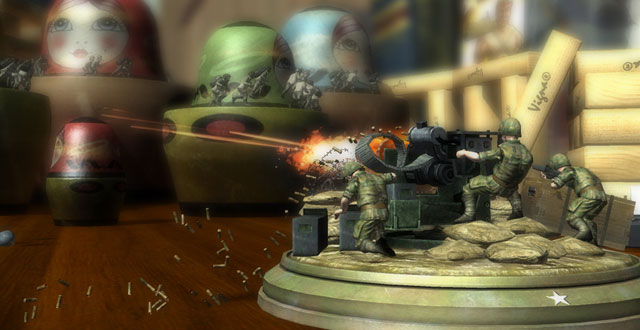 War is like a child’s imagination. Both are unwieldy. Employing each, you think you’re in control, held by the false belief that you can have anything you want; all you need to do is take it. But our ordered plans soon come undone. In Stanley Kubrick’s 1957 film Paths to Glory, Colonel Dax expresses the inevitable conclusion of war in three terse lines: “Too much has happened. Someone’s got to be hurt. The only question is who.” The same might be said of growing up. Stubbornly, we press on, until we find out what has been waiting for us all along, and it’s nothing at all like we expected.

Three missions into the main campaign for Toy Soldiers: Cold War, the new tower defense game for Xbox Live Arcade, I realized nothing had been said about the children playing with these figures. The game’s conceit revolves around a child’s toys coming alive and doing battle in various military situations. Ostensibly, the prime mover here is “you,” the player, sprawled across your bedroom’s carpeting with a treasure trove of plastic munitions that heed your every whim. But who orders the oncoming forces? Perhaps your pen pal from Moscow, who misunderstood your use of red ink. Your enemy is never revealed, as well it shouldn’t be. To play alone in your room is to be enforcer and opponent alike; the do-gooder and evil-doer are the same, and they are both you.

A colleague familiar with the first Toy Soldiers explained to me how the game was a visual metaphor for our own soldiers in World War I, used up as mere playthings, expendable for the greater good. Here, the fighting is more in line with a child’s actual playtime, requiring as it does a heaping dose of fantasy. Let’s not forget: the Cold War of course wasn’t really a “war” at all. There were no active troops on the ground—at least, not lined up against an outfit of Russian armies, as depicted in this game. The choice of subtitle here allows for a scattering of fun, timely references—the musical theme two notes away from a Top Gun anthem, the Rambo caricature leaping in as a special item to grunt and blast your foes away. But any attempt at historical accuracy is necessarily left by the wayside, to crash and burn next to your 1/48th-scale F-14 Tomcat that just ran out of batteries.

The units are a mix of standard-issue artillery and more whimsical household items. An aerosol can of lubrication becomes a heavy-duty flamethrower, described as “a worthy successor to the magnifying glass for melting plastic.” I wish there were more of these nods to the go-play-in-your-room aesthetic. Why give us another Gatling gun when, as a child, I’d more likely borrow a Transformer to give my side a winning edge? Signal Studios could have dealt a wider hand of makeshift objects to use. Instead it remains hemmed in by the Soldier aspect of the title, and less inspired by the Toy.

A close attention to detail brings each skirmish alive, and does capitalize on the fact that these men on the ground are Made in China. (Curiously—though keeping with the traditional look of these toys—I saw no army women amongst the troops.) When an infantry member takes a bullet it might spin in place, then go stiff, settling to the ground frozen in place before blowing up into green chunks. If a member of the incoming wave reaches the opening of your Toy Box (your “tower” to defend), it’ll high-step, taunting your anti-tanks to send one more shell its way. Hit one with a missile and send it skyward, screaming and on fire. Five seconds later the screams persist, getting softer with altitude, then louder as it falls to the ground in a blaze. It’s a funny gag.

But I do wish all these plastic parts might react more realistically: Why can’t the battlefield, at the end of a 10-minute skirmish, be littered with melted hunks and torso-less limbs? What if these obliterated soldiers became obstacles in themselves, hot pools of magma to be avoided? The answer is most likely technical setbacks, as all those pieces, left onscreen, might have hindered the game’s frame rate. Even with casualties disappearing, Toy Soldiers noticeably slows when dozens of army guys trample across the ground and fighter jets cruise in from beyond your twin-size bed to lay waste to your defenses.

The same mechanic that elevates the Toy Soldiers series above many other tower defense games—the ability to take control of each unit, not just place them—stays in line with its premise, of war as just another template for a child’s imagination. An example is the inclusion of a Shell Cam, allowing the player to guide a mortar shell from a first-person perspective. As kids, we’ve all grabbed an action figure and flown it across the room, making whooshing sounds with our mouth. The Shell Cam allows the same ability, only you use a thumbstick instead of your right hand. Other military shooters offer such power; but the rapid shift in player autonomy, from soldier to missile and back, is jarring. In a game where all actions are products of the mind, with characters brought to life through the simple act of pretending, such malleability of control makes sense. These are my toys; they will do what I want.

But then, as it always must, real life invades the fantasy. Desk lamps light the action from above. Eighties cultural paraphernalia dot the landscape, often relegated to the out-of-focus background. Your machine-gun commandos might stumble upon a Viewmaster, or spy an upright arcade cabinet in the distance. One mission depicts an Apple II-ish computer monitor playing the original Tetris, famously made by Russian Alexey Pajitnov, a fact surely overlooked by the millions of patriotic Americans playing while the Berlin Wall still stood. Such details are appreciated. I only wish these assets played more of an active role in the gameplay, instead of being in-jokes for the observant: pure visual marginalia.

Other details cause one to question whose room you’re playing in, and what other extracurricular battles they are fighting. A VHS tape, implied to be homemade, is labeled “Debbie’s Desires.”

Imagine. Toy Soldiers becomes a way to push back the grim realities of suburban hedonism: all those men coming into your house, leaving with satisfied grins and empty wallets. The front door creaks open; you start a battle anew—“Sound the alarm! Here come the Commies. Do your worst but we’ll never surrender!”—if only to let the wailing sirens drown out the noise coming from elsewhere in the house. The Campaign mode is 10 missions long, with little connection between each; these are not subsequent battles in the same war but one imagined scenario after another, dreamed up to escape the nightmare you live in every day. All of your toys may perish, but their pieces connect with glue. Your confused mind, your aching heart; these are less easily put back together.

“When’s Dad coming home?” This is not a line of dialogue from the game. This is a made-up precursor to my unseen character’s recess.

“Go to your room. Mommy has a friend over.” There is no mother in this game. She is suspiciously absent, seen only in your insatiable lust for war-mongering amongst your cavalcade of toys. In the real world, this same lust fuels the backwards notion of progress via bloodshed, pushing too many soldiers, kids themselves, onto too many dusty fields. Growing up is hard enough already without the prospect of one day shooting bullets at strangers. The games we play as children are suffused with imagined suffering, so that our own can be vicariously eradicated. As in war, the worst collateral damage takes place once the fighting is done. We dig a trench for our emotional wounds, the regret and resentment collecting over time, left to fester long after the battleground of childhood. Until that one day when we—