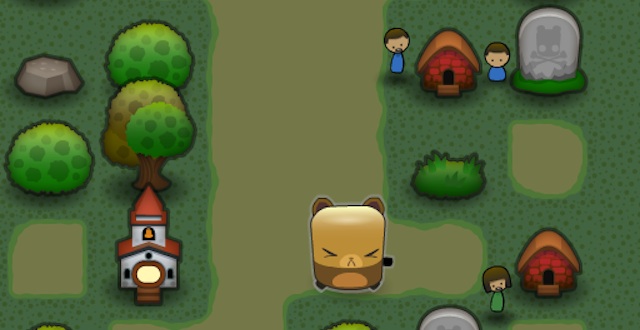 Triple Town is a clever combination of FarmVille’s EZ-building simulation and Bejeweled’s match-3 mechanic. Your playfield is a 6×6 grid. This square of 36 sections constitutes your town. Each town is sparsely populated at first, with a bush here or a rock there. Each move offers you a new object over your cursor; place three of the same objects next to one another and the triplet will form into a single, better version. Grass clumps turn to Bushes, Bushes turn to Trees, Trees turn to Houses, etc. The goal is to place objects effectively in order to build the best town. Once all 36 spots are filled, with no matches available, a horn blows in triumph and you’re told how mighty and longstanding your settlement was (a 10-minute game might equal “56 years of history”), and whether you’d like to share the good news with friends. Check your wall, status, anything—Triple Town disappears, taking up secret residence wherever these things hide.

I never played a Facebook game until I played Triple Town, developed by Spry Fox. The original first released for Amazon’s Kindle; for $2.99, you play a stripped-down version in black-and-white. Rejiggered for the web, Spry Fox cuted-up the graphics, made it free-to-play (with the option to buy moves or pieces in small increments of real money), and added ninja bears. Anything you ever wanted to know about web browser gaming’s direction is right there, exemplified in Triple Town’s development transition: from stark, solitary, and single-pay, to cuddly, social, and monetized.

All I knew about the hundreds of gaming experiences available through Facebook is that many of my “friends” (read: people I graduated from high school with over a decade ago) were playing. And they all wanted me to play with them. Or rather, they wanted me to help them play better. My response took the path of draft dodgers and vegans; I would abstain due to personal objection. Of course, this choice was founded on nothing so sturdy as morals. My decision instead flowed from the narrow confines of routine. I play games over there. Here, I update my status with witty bon mots. Never the twain shall meet.

And so I never played FarmVille or one of its genre-tweaked cousins. Nor have I played Bejeweled, the PopCap gem-bursting phenomenon responsible for glazed eyes and countless hours of lost productivity the world over. Granted, the match-3 puzzler did not originate on Facebook, but has since been reborn there as Bejeweled Blitz to great effect, played by over 8.4 million monthly active users. Zynga’s ’Ville series is even more popular. CityVille charted at No. 1 this past month, keeping 51.1 million players busy, according to metrics site AppData. To avoid one is feasible; to avoid both smacks of some inverted irresponsibility. Clearly I’m not paying attention.

But “avoid” is the wrong verb. Sure, the constant invitations irked me at first. I do not want to help feed your Zombie Shih Tzu. Will I bake a Frosted Vanilla Cupcake with Colored Sprinkles to give to your Mafioso Don in return for a favor? No, I will not. But I’d rather a slew of colorful app icons fill my digital cupboards than another email suggesting my manhood lacks girth. I never replied to these invites, but I never clicked the “Ignore” button, either. I simply ignored them. The distinction felt meaningful at the time. My point is, this ignorance was not a product of willful disdain. There was just always something else at the ready, another distraction distracting enough to distract me before either game sucked me into its all-consuming time sink.

“What is this talking screen?” our imagined elder might say. “Why does such feeble entertainment sustain your attention? Feel these calloused hands. Such is the mark of hard work, of productivity. This black magic box will consume you.”

Like you, I’m a product of this brave new online world-wide superhuman highway called the ’net. And no, this isn’t a Wired article circa 1994. Yet sometimes I wish it was, so I could catch up and stay current without the constant effort. Such expenditure of energy tires a guy out. Makes him feel old. My 13-year-old self would have been a Facebook prodigy, trading resources with Allies and admiring my friends’ gardens and diamond-encrusted hilts all day long, tick tick tick, check another one off the box. Today, my virtual self sits apathetic, stunned to paralysis by endless choice, annoyed by the faraway neediness of faceless others—Do I Accept? Another one Ignored.

So yes, I’m scared. But this fear is the same that spurred the anti-television backlash in the 1950s, organized by a wrinkled generation weaned on fireside chats and radio drama. “What is this talking screen?” our imagined elder might say. “Why does such feeble entertainment sustain your attention? Feel these calloused hands. Such is the mark of hard work, of productivity. This black magic box will consume you.” And so it did for decades. Our hands are calloused again, but now only the fingertips grow sturdy from use. These are the oily nubs upon which we type, swipe, pinch and touch our every whim. Now there’s a new voodoo in town…

I invited my six closest friends to play Triple Town. All ignored me.

It’s quite fun alone, really. I often find myself playing Triple Town when I’m supposed to be doing something else. Priorities lie elsewhere, but for some reason, there I am, matching Huts into Houses, crafting Cathedrals from Tombstones. Doing this when I should be doing that.