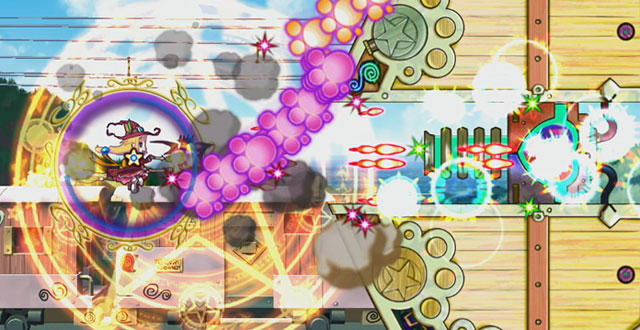 Trouble Witches Neo! is a conflict of style and substance: an uncanny chimera whose embodiment only makes sense within the context of 30 years of otaku lore. It’s instantly oriental and alienating; alluring yet slightly repugnant, like unfamiliar incense lingering in a seedy massage parlor. The game is defined by clashing culture shocks: by little witches, precocious in alchemy, drawn in the exaggerations of moe, a comic style that fixates on giant-eyed anime girls; and by the predicament they find themselves in—the sensory overload of a bullet-hell shooter, Japan’s most hardcore gaming niche—as fleets of airships flown by lulz-faced pilots fire a bazillion neon bullets.

To those unfamiliar with Japanese geek fandom, this potion of ponytails and devilish play must be disorienting. Outside of its cultural context, Trouble Witches seems as ill matched as a Barbie-doll-themed first-person shooter, or a tank simulator featuring kitten commanders. The tone draws comparisons to cute-’em-ups, lighthearted games like Magical Chase and Parodius that lampooned traditional shooters. (Think Don Quixote to medieval romances.) Yet zaniness has fallen by the wayside here, replaced with a motif that lacks even a hint of irony. Studio Siesta, the developer that unleashed this saccharine barrage, takes cuteness as seriously as it takes gunning down industrial-age mechanisms, which is to say, very seriously. A love letter has been written to love letters of love letters, and the idea of parody has been lost—not in translation, but in iteration.

Outside of its cultural context, Trouble Witches seems as ill matched as a Barbie-doll-themed first-person shooter, or a tank simulator featuring kitten commanders.

When I first scrolled past Trouble Witches’ purple-pink promo art on the Xbox 360 dashboard, I didn’t stop. Only after having it recommended did I download the demo, then delete it. When the recommendations kept coming, I reluctantly said “Okay.” I bought it, played it, and had fun, but by the end of the night, I was through. The game wasn’t for me. My conclusion turned out to be an objective fact. Trouble Witches began life on the PC as a doujin game, made by Japanese hobbyists for several thousand Akihabara-ites. By a minor miracle, it was turned into an arcade game, and then picked up by SNK for a remastered international release, after buzz around manic shooters like Cave’s Deathsmiles and Guwange paved the way for its journey to the West.

The trouble with Trouble Witches is that the people who give it enough time to be convinced of its merit are those who are already inclined to like it in the first place: the types who collect scantily-clad figurines and mod their systems to play imported games. The game’s intricacies are far from daunting, but they aren’t evident either. They require otaku intuition, or further reading. After perusing a FAQ to grasp the finer points of witchcraft, such as letting off the shoot button to vacuum in a slot machine’s worth of bounty, I gave Trouble Witches a second chance and found it a richer experience. The significance of power-up cards, which are peddled in hot-air balloons by sisters wearing pumpkin hats, became clear. As did the variety in the speed, strength, and shot patterns of the witches and their Pokémon-esque sidekicks, such as a sunfish donning a butler’s bowtie and mustache, or a turtle holed up in a magic lantern. The margin of error is hairline, and picking up on these nuances is the difference between competence and credit feeding.

The degree to which you’ll enjoy Trouble Witches comes down to how much you’re willing to put into it. Mastering the art of magic circles—barriers that suspend enemy fire in bullet-time—makes the otherwise cut-and-dry shooting and dodging exceptional. These defensive maneuvers not only freeze tsunamis of bullets in their tracks, providing a path for crafty escape, but are also pivotal to unlocking incredible high scores. The alchemy of converting incoming bullets into buckets of yen involves, first, freezing them; then, dismantling the attacking vessel; and lastly, sucking up the spoils as the bullets evaporate into loose change. The technique lends gunplay a multitasking dynamic and, with it, the satisfaction of being abundantly paid for using finesse.

My question is: What’s a twelve-year-old to do with so much money?