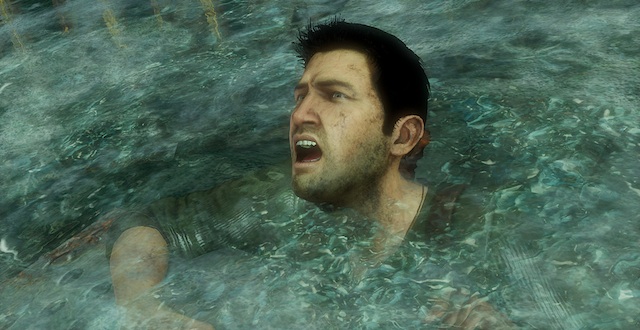 The Uncharted series, more than anything else, exists because of its lead character, Nathan Drake. His obsession with adventure and risk propels both him and us toward a delightful danger, which we gladly experience through him. Even though attempts are made within Uncharted 3‘s story to call into question Drake’s motives, we still play the game partially out of some desire to be like him. Rather than shrink in the face of danger, he expresses surprise and exhaustion, but never fear. He doesn’t give in to enemy intimidation. His physical abilities are substantial. For a computer-generated male, he is remarkably attractive. We follow his every move, we hang on his every word, we laugh at all his jokes—but the more we want to be like Nathan Drake, the less we get to be him.

Popular media like Uncharted are an easy form of escapism—a way to distract ourselves, or to feel excited about something removed from reality. Drake is a man of concrete action. He has the talent to carry out his lifelong dream of following in the footsteps of his ancestor, Francis Drake. He has Sully, an older and experienced friend who follows him wherever he goes. Most crucially, Nate has no job but doesn’t lack funds. If he needs an airplane, one is made available to him. We merely want to take a small part in this impossible dream, just for a little while. Nate always escapes danger. You can’t fault him for feeling invincible.

Nate has been created by developers that value perfection themselves. You can see it in the protagonist;  in the lovingly engineered waterfalls, oceans, deserts, and mountains; in the inevitable resolution at the end of every Uncharted game. And as with any perfectionist, you can see Naughty Dog’s disdain for the possibility of falling short.

There are many moments in Uncharted 3 that exist to drive the fiction to a place of resolution, and they are barely played at all. It’s nearly impossible to screw up the key moments in the game by making a wrong turn or messing up the timing. Those moments leave players with only the most rudimentary control:  While running from deadly spiders, press down. While moving through a tight crevice with a claustrophobic friend, press forward. While fighting a giant while being sucked out of a plane, hammer on X—sometimes press Triangle. You’re in control, but Uncharted is directing your every move, like your dad teaching you to hit a baseball off of a tee for the first time.

When we direct our protagonist’s second-to-second actions, it’s obvious why the game is so anxious to take it away. Death can be frustratingly common. Uncharted 3 is stunning to observe, but also feels strangely restrictive to interact with.  Nate has a habit of running away from things and toward the camera—this raises the tension and gives us a clearer view of what menaces Nate, but makes it hard to see where he is going. Daring escapes are often interrupted by a sniper shot to the head, instantly killing Nate.

For a computer-generated man, he is remarkably attractive.

Uncharted‘s reaction to our imperfections doesn’t make death less brutal, but more so. Nate’s body goes unnaturally limp, color evaporates from the screen, a stock musical cue plays, and those around you either mock or mourn your death, depending on their persuasion. The treatment of this event is so dismissive, so grating, and so passive-aggressive that breaking Drake’s fiction feels more like breaking trust with Naughty Dog.

You guide Nate step-by-step as an entire city crumbles around him. Running full speed from a wall of concrete, you feel you have finally grasped the game, when you miss a gap. The game cuts to black and white, and the checkpoint starts again, with the same people saying the same things. It’s clear that your death had absolutely nothing to do with Nate’s true story. When things go so badly that Nate ends up dead—that’s all you. The developers are washing their hands of those moments. That never happened on their watch. They understand that you’re doing your best; your best is just not good enough. You finish out the rest of the level, but it’s not the same.

Those moments when you are more directly involved in Nate’s movements and decisions are your opportunities to say you played a part. But firefights feel obligatory and laborious—they consist mostly of attempting to aim an unforgiving reticule at two-inch targets that insist on darting back and forth. Usually these firefights end when Sully tells us to “use the RPG!” to blow up a wall.  These are not Nate’s best moments. His best moments come when you leave him alone, or just propel him blindly, away from spiders, water, collapsing cities, whatever. Pressing forward to run, tapping a button to turn a crank, and simply watching a cut scene in Uncharted 3 are our greatest moments of joy. Outside of death-defying escapes and tricky relationships, we’re relegated to the routine stuff: climbing, shooting, and running around.

But who are we to complain? Naughty Dog has given us the privilege of taking part in Nathan Drake’s life. It’s a life that’s entirely more exciting and fulfilling than we will ever experience, filled with risk, adventure, romance, friendship, and treasure. Our lives, with all their mundanity and reasonableness, are exactly what we deserve. I mean, we could never handle real control over something as precious as Nathan Drake’s life, even in a videogame.

We’d just screw it up.